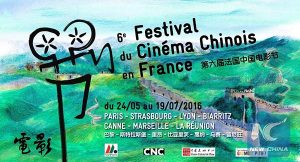 The sixth Edition of the Chinese Film Festival in France will be showcasing the best Chinese film from the 24th May – 19th July. Two cinemas in Paris will be screening festival films, The Gaumont-Marignan and Cinema Christine 21, program times and dates can be found here. Eleven films have been officially selected to screen over the festival period, including the titles such as Monster Hunt, Tiger and Dragon 2 and Mojin- The Lost Legend, the full official selection can be viewed here.

The festival is joint chaired by Mr Su Xu, the director of the Chinese Cultural Centre in Paris and Mr Jerome Seydoux, co-chairman of the Pathe group. Anne Fountaine, French film director and Vincent Perez, actor and director serve as ambassadors of the festival.

Through the release and screening of eleven new films only seen before in China, the festival aims to show the public how diverse and rich Chinese cinema is, creating an appreciation for Chinese film production, and encouraging engaging audiences to learn more about another country its culture. The festival unites two far-away countries together through workshops and discussions which promote dialog, cultural exchange and the sharing of ideas.

Image courtesy of The Cultural Center of China in Paris