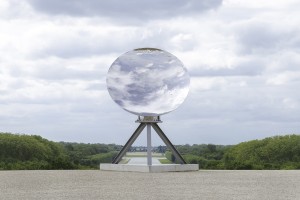 Celebrated British sculptor Anish Kapoor, brings a political perspective on power and its symbols as the palace marks 300 years since the death of Louis XIV. “I treat space as a poetic idea,” he says, unfazed by the scope of the imposing palace and its 800-acre garden, “not within its limits but with all it involves.”

From June to October, Kapoor’s works transform the emblematic gardens of Versailles. The grounds become uncertain and moving. Waters swirl. Romantic ruins take hold of the Tapis Vert. Exposed interior orifices are hidden within the garden’s labyrinths. The mirrors that are so central to Versailles now distort it. The very controlled landscape of Versailles is drawn into instability.