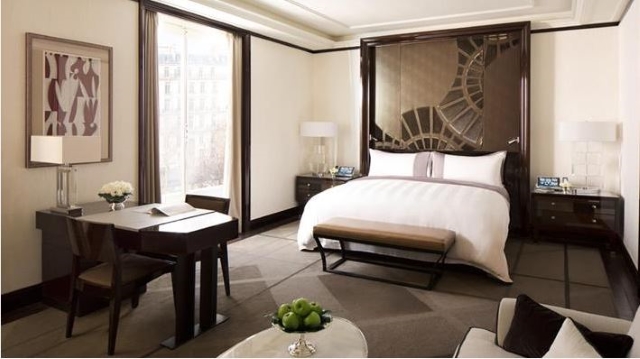 When Peninsula Hotels opened its first European property on the avenue Kléber on August 1, 2014, it made headlines around the world. The Hong Kong-based hospitality group spent millions on the restoration of the century-old building where George Gershwin wrote “An American in Paris” and Henry Kissinger negotiated the Paris peace Accords, officially ending the Vietnam War. In the process, Peninsula recruited the top artisans in niche fields—like the gilders who restored the Statue of Liberty’s flame—so that the hotel is a veritable showcase for French craftsmanship and savoir-faire.

This is a palace hotel by every definition—from the gilded shopping arcade and haute cuisine restaurants to the terraced suites and spa by ESPA. The 200 rooms are equipped with every possible convenience, including digital bedside tablets preset in one of 11 languages and nail dryers for freshly manicured hands. If you’re looking to splash out on luxury in Paris, this is the sublime new destination to do so. Did we mention the fleet of bespoke luxury cars parked out front? There’s even a restored 1934 Rolls-Royce Phantom II.

Previous Article A Look Inside STAY, Yannick Alléno’s Resto at Sofitel Paris Le Faubourg
Next Article You can Row Inside the Palais de Tokyo in Paris. For Real.