From German Starlet to French Icon: Three Days In Quiberon 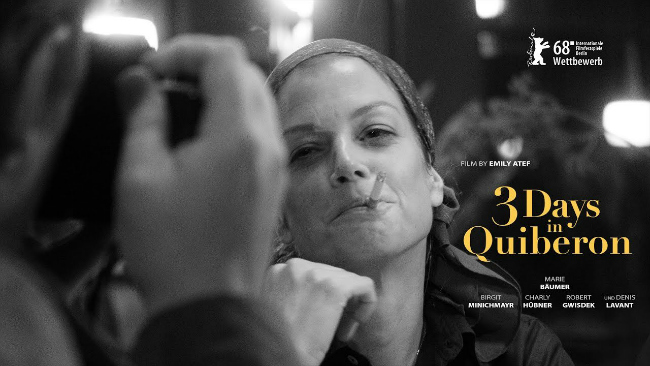 The French have a thing about show-business “icons”. Maybe because the society has become so secular, a select group of performers has picked up the slack. Some, like Edith Piaf and Jacques Brel (who was actually Belgian) became larger-than-life figures beyond France. The French have even adopted American celebrities, like Marilyn Monroe, reverently spoken of by her first name (my French friends stare blankly when they refer to “Marilyn” and I reply “Oh, you mean Marilyn Manson?”). Another one is pop singer Joe Dassin—whose parents were Americans of Central-European Jewish stock (his father, filmmaker Jules Dassin, was from un-iconic Middletown, Connecticut).

Trois Jours à Quiberon (literally Three Days in Quiberon) is about yet another icon, Romy Schneider. After starting her career in her native Germany, playing “Sissi” (Empress Elizabeth) in a trilogy about old Austrian royalty, she fell in love with Alain Delon and moved to France. She appeared in movies by major filmmakers throughout the 60s and 70s, led a tempestuous life, endured a number of tragedies, and died at 43 of cardiac arrest. But her image and name have lived on and on in the popular press and TV.

Given her background, it’s fitting that the film is a Franco-Austro-German co-production. Emily Atef, a German director of Iranian descent, adapted her film from a Frenchman’s original idea. It’s based on a real series of photo-journalism sessions that took place in 1981 in a seaside Breton town. Quiberon is a resort of fishing villages, beaches, craggy rocks, but by shooting in softly gray-tinted black-and-white, Atef turns the town into a beautiful but melancholic setting out of a Patrick Modiano novel.

When the movie begins Romy is following a draconian regimen at a spa. She’s drying out, but the food is slim pickins as well. When she’s joined by her childhood friend, they have much fun at the expense of the type of detox center that became popular at that time. Romy and Hilde make up a complementary pair. The actress (played with preternatural sensitivity by Marie Baumer, who startlingly resembles Schneider) is all instinct and passion, while her friend is the sensible one. Hilde (Birgit Minichmayr) protects but also indulges her, as Romy struggles with sadness over her estrangement from her young son David.

Their idyll is disturbed when Romy agrees to be interviewed by the German publication Stern and they’re visited by another complementary pair. Lebo (Charly Hubner) is a photographer whom she admires, the reason she agrees to the interview. They’ve known each other for years and are old friends, perhaps more. His partner Jürgs (Robert Gwisdek) is a thin, somewhat handsome but bloodless and manipulative journalist. (He forges a bond with her by falsely claiming to have known her first husband, who committed suicide, saying that he’d spoken affectionately about her).

The interview sequences risk turning the film into one of those 2-person stage performances where a famous person recounts her life to cues from the straight man. At their best, the interviews morph into confession, interrogation, and psychoanalysis, by turns affecting and searing. The journalists, with the peculiarly German quality of being thoroughly cynical yet corrosively aware of their own cynicism, eventually question their motives, as does Hilde. But Romy is oblivious—or is she?

We get earthy relief when our gang of four goes into town to mix with the locals. At one point they crash a wedding party in a bistro. There’s a fine comic scene with Denis Lavant as a half-cocked, half-cracked poet. He schmoozes with Romy, drinks and dances with her, reads poetry, and gets her to sing and play accordion. The scene encapsulates what Romy was running to after she left a more strait-laced Germany.

Romy Schneider, like other artists before and since, was bedevilled by substance abuse: pills, cigarettes, and especially alcohol. France’s bon vivant culture (and her own bon vivant nature) tempted her on one side. On the other, manipulators and exploiters drove her into serial bouts of depression, exacerbating her addictions. Ms. Baumer doesn’t get to the bottom of Romy’s character, but evokes it with painful vividness. We come to understand that her emotional anchor was one she bore more like a cross: the maternal feelings for the children taken away from her, at least indirectly. The interviews also bring out regrets over own parents: the mother who sells tell-alls to the German press, and her late father.

At one point the movie lurches into Hollywood-style melodrama, the star in her substance-fueled decline, recalling movies like Valley of the Dolls, the fictionalized bio of Judy Garland. Happily the director pulls the movie out of its tailspin by developing the characters and their interlocking relationships. She’s helped by the actors: Minichmayr’s Hilde transcends the soppy best-friend role, just as Gwisdek’s Jürgs becomes more than a villainous cold fish. The teddy-bear-like Lebo is the counterweight to Romy’s despair, not only reassuring her but expressing his feelings through his lovingly shot photos.

The cinematographer also shoots Romy, that is, Ms. Baumer, in a tender light. In the same way Ms. Atef directs the cast in a way that brings out humane, or at least human, epiphanies in each of them. The script is mostly just serviceable, and the post-script of Romy back home, playing with her toddler daughter, at first seems heavy-handed. But then in a subtle shift the film foreshadows the tragic sequel that will be lost on most American viewers (until they turn to Wikipedia) but well known by the French. Here too the troubled emotions are resolved in an evocative visual image of the German actress who found beauty and tragedy as an icon in France.

Previous Article Hotel Monte Cristo Opens in the 5th Arrondissement of Paris
Next Article News from the Louvre, the World’s Most Visited Museum