Paris in the Movies: Which Film Best Evokes the City of Light? 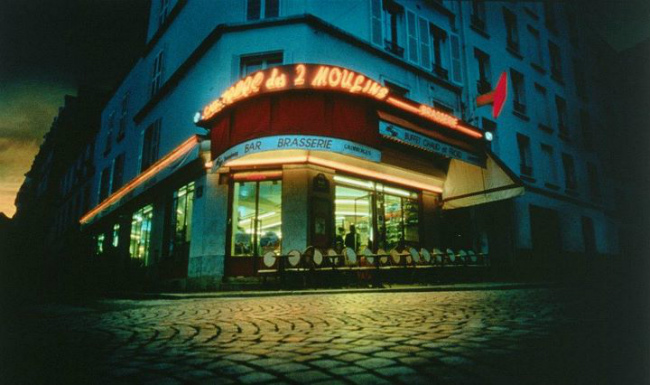 We asked Parisians… Which film best evokes Paris? Whether a French film or a Hollywood production, new or classic work… what movie captures the magic of la Capitale? Paris is so multi-faceted, and so distorted by romanticism—or prejudices—that it was only natural for our anecdotal list to be diverse. The answers from the motley sample of locals often reflected the particular sentiments of the responder, or their mood of the moment. No one answered An American in Paris (which was made entirely in “Hollywood, USA,” as the credits proclaim)– despite a successful musical adaptation which recently travelled from Paris to Broadway. And no one gave what would have been my own personal choice, A Bout de Souffle (Breathless), Jean-Luc Godard’s first feature starring Jean-Paul Belmondo and the American Jean Seberg. Other honourable non-mentions: Paris Vu Par …, a New Wave compilation film and Quai des Orfevres, a classic policier directed by the noir great Henri-Georges Clouzot. In no particular order: 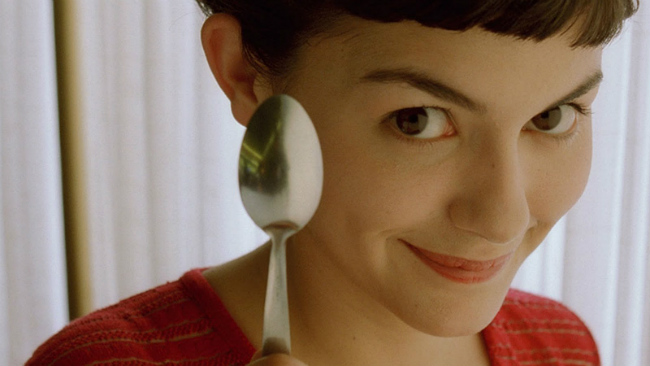 1. Amélie (2001)—this film, directed by Jean-Pierre Jeunet, was a big hit in France and in the U.S. too, and made a star out of Audrey Tautou. It portrays one fabled corner of Paris—Montmartre—in a whimsical style that reflects the baroque comic vision of the director, but also the variegated nature of the quartier, which even today is filled with artists, bohemians, hustlers, sex workers, immigrants, and tourists. 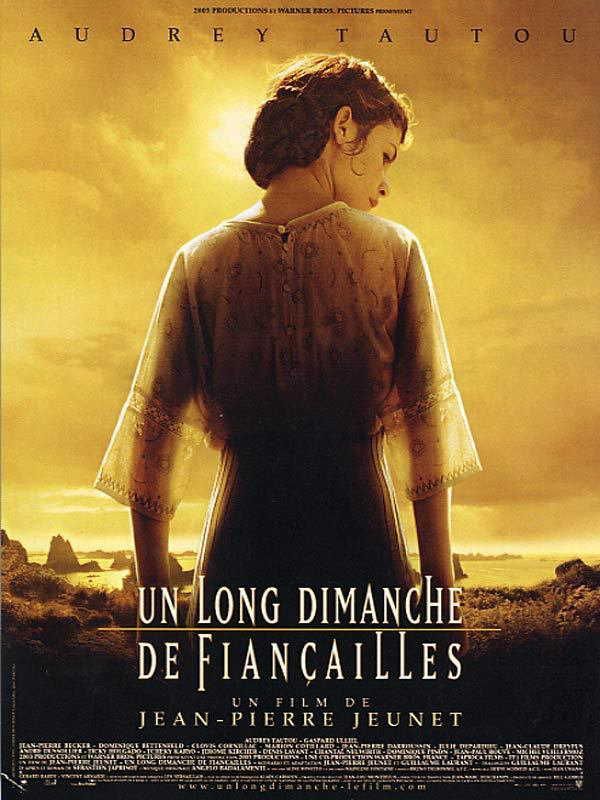 2. Un Long Dimanche de Fiancailles (2004) A Very Long Engagement—Yet another film directed by Jeunet and starring Tautou. The film takes place during the First World War, and tells the story of a woman searching for her poilu husband. It portrays a long-ago Paris and despite a reprise of Amelie’s comic whimsy, also reminds us of the lasting impact of WWI on French sensibilities. 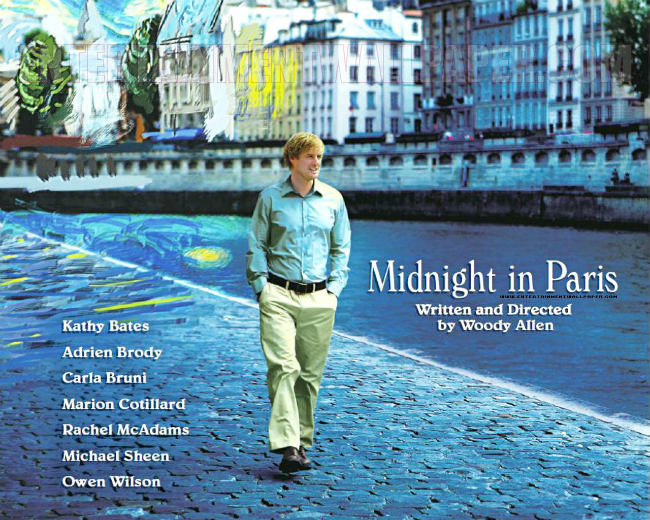 The poster for Woody Allen’s Midnight in Paris

3. Midnight in Paris (2011)—The most frequently cited American film (Woody Allen’s films aren’t really “Hollywood”). Allen and the French have had a long-lasting love affair dating back decades. Allen beautifully filmed numerous sites, obvious and less obvious, in the city. The narrative is, appropriately, a romantic fantasy which contrasts Lost Generation Paris and neurotic present-day American tourists. The film won the Oscar for Best Original Screenplay, and featured a new generation of actors, American and French, including Owen Wilson, Rachel McAdams, and Marion Cotillard. 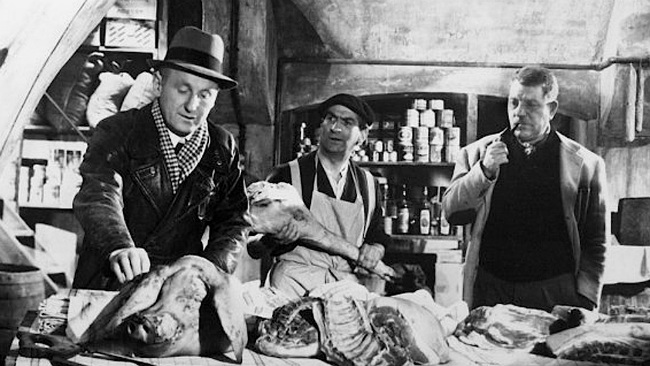 4. La Traversée de Paris (1956)—a surprising number of people mentioned this film, which I’ve never seen. It was made by one of the foremost pre-Nouvelle Vague directors, Claude Autant-Lara. The film takes a comic look at a dark moment in the past, portraying black marketeers during the Occupation (which wasn’t all that long before the film was made). It starred French cinema icons Jean Gabin and Bourvil, and introduced in a small role the comedian who became France’s best-loved comic actor, Louis de Funes. 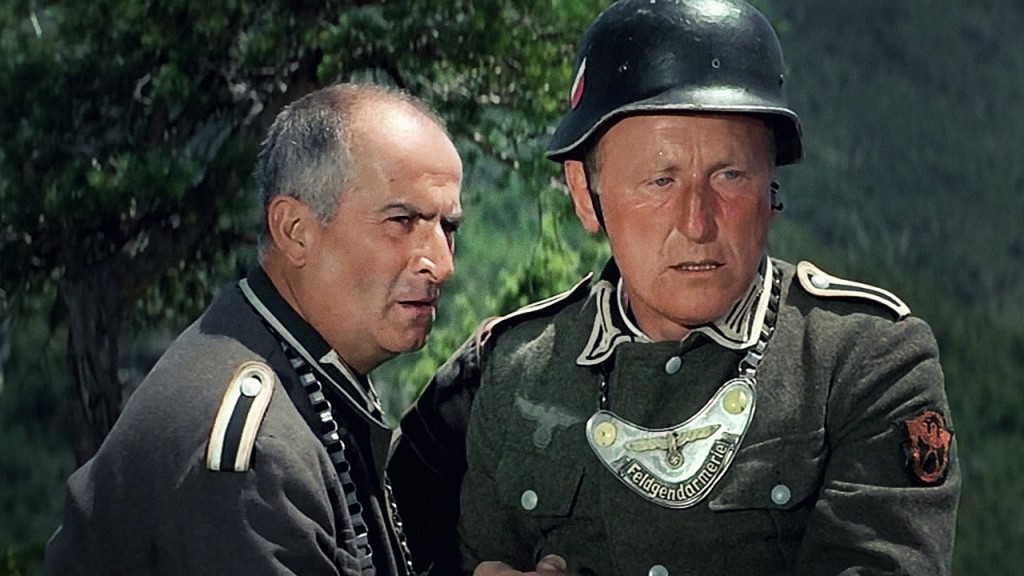 5. La Grande Vadrouille (1966)—Made by Gérard Oury, another film that portrays Paris during the Occupation (though it also ventures beyond the city). Like La Traversée de Paris, this film treats a dark time with the absurd, in this case farce—Louis de Funes is the undisputed star of the film. La Grande Vadrouille isn’t well known outside France, but it’s the country’s biggest grossing film ever. It’s one of those films re-broadcast on TV every year, just as The Wizard of Oz used to be in the US. 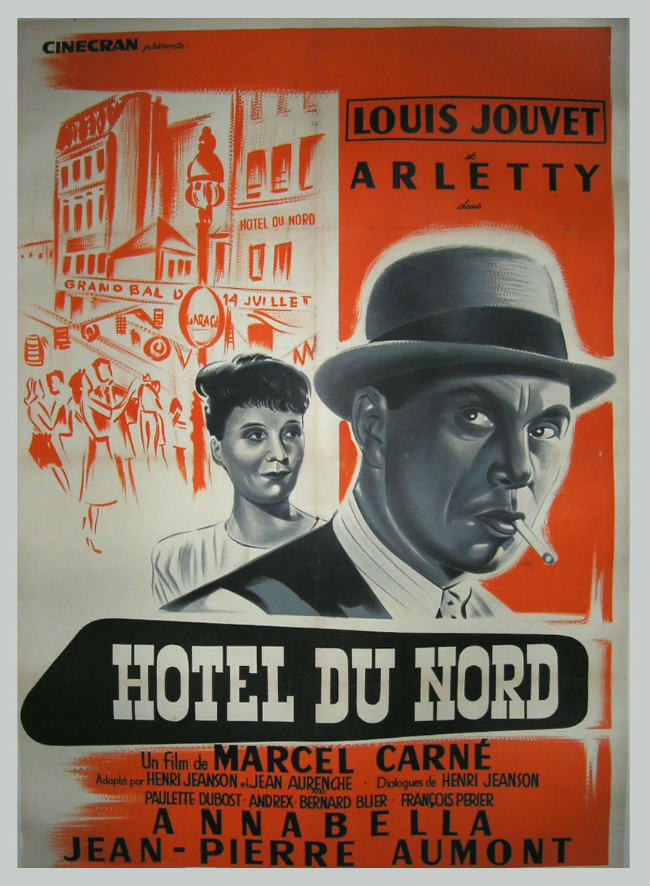 6. Hotel du Nord (1938)—This classic film was directed on the eve of WWII by Marcel Carné, one of France’s greatest directors, and features the legendary icon Arletty (whose reputation remains under a cloud because she blithely continued her career during the Occupation). It’s a Grand Hotel-type portrait of numerous characters, but more melodramatic and atmospheric. Ironically, the Canal St. Martin quarter is now one of Paris’ most thoroughly gentrified neighborhoods. 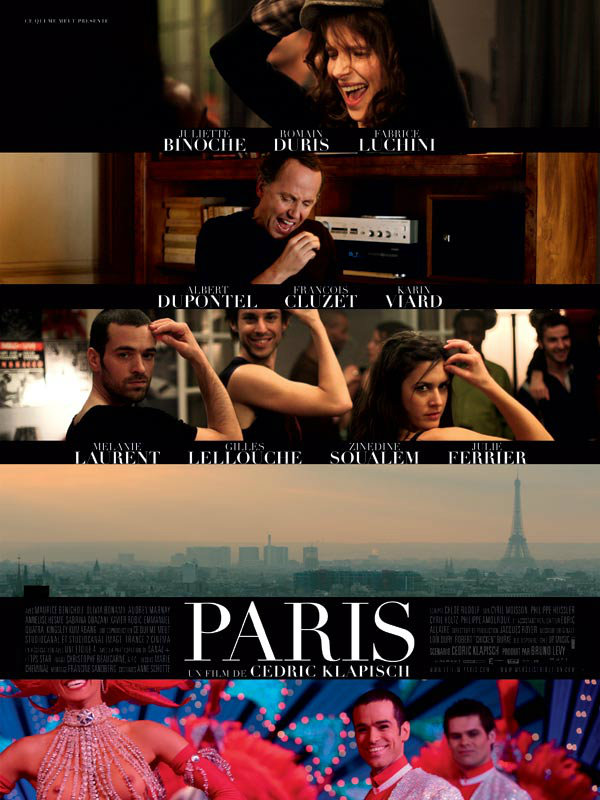 7. Paris (2008): Cedric Klapisch is known for comic films with a genuinely human touch. Paris is a bittersweet film about a dancer sidelined by an illness. He uses his newly sedentary and solitary life to observe others around him. This is a frame for several stories featuring some of France’s best actors: Fabrice Luchini, Juliet Binoche, Romain Duris, Melanie Laurent. 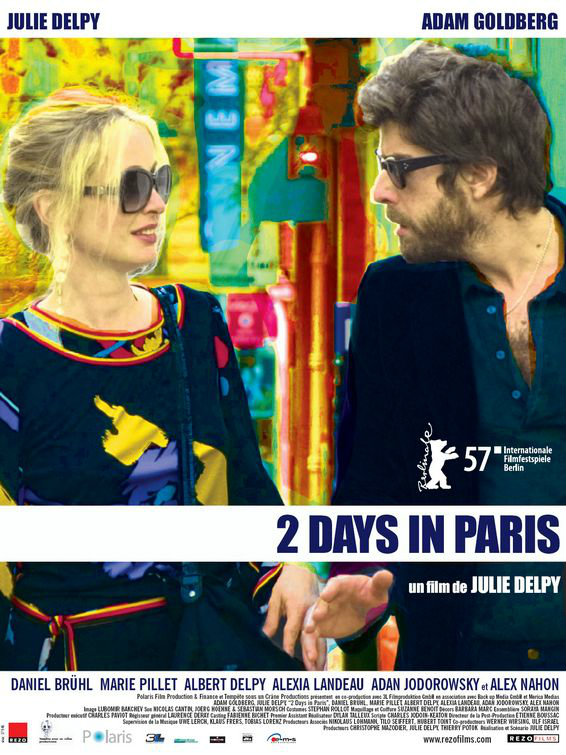 8. Two Days in Paris (2007): Directed by actress Julie Delpy. She also wrote, edited, wrote the soundtrack, and starred in the film. In other words it’s an effort at an auteur film, not so much in the French tradition, but the New York Woody Allen vein. In fact the film starts in New York, but the troubled couple it depicts go to Paris to resolve their situation, only to complicate it. 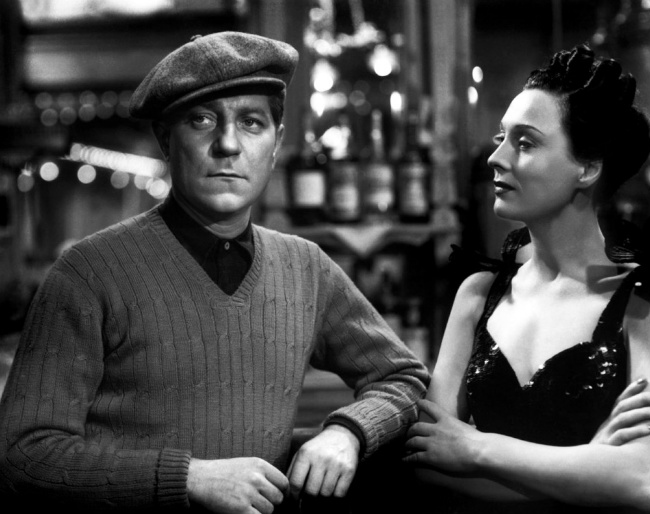 9. Le Jour Se Lève(1939): Another film directed by Marcel Carné. It’s a melodramatic subject, tracing the events that led to a murder, but poetically filmed, and written by one of France’s great twentieth-century poets, Jacques Prévert. It’s been said the film was made to avoid any possible political innuendo, but in hindsight it’s easy to extend its fatalism to the overall mood of the time.

10. Peur Sur La Ville (1975): The unlikeliest film on the list (at least in my book), this film does star Jean-Paul Belmondo, the most iconic actor of French post-war cinema. Belmondo first emerged as a New Wave actor in Godard films like Breathless and Pierrot le Fou. He eventually became a more conventional, but often tongue-in-cheek, actor, a combination of Steve McQueen and Burt Reynolds. Peur Sur La Ville, in which Belmondo plays a police commissioner tracking down a terrorist (and does his own stunts) was a smash hit, and cemented his status as France’s signature mega-movie star. 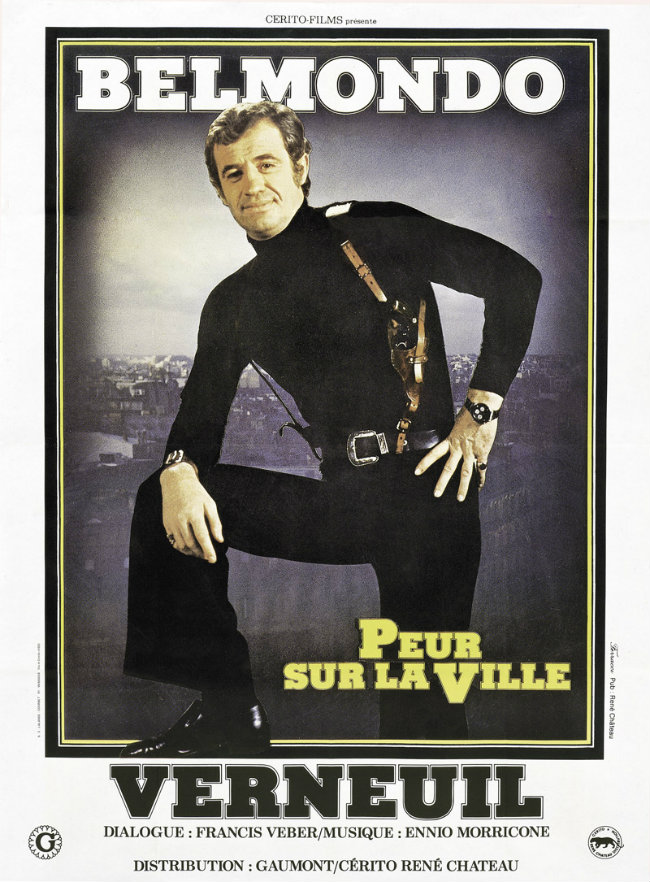 More in Paris in the movies