Learning How to Be Seen: Les Invisibles

Louis-Julien Petit’s Les Invisibles is a complicated but marvelous confection of a film. It works as film social, feel-good movie, feminist anthem, broad comedy and rom-com. That these dimensions don’t fuse seamlessly, but often collide, ironically makes the film work even more. It’s messy in the way life is messy, especially the social strata the film portrays. It’s about people who aren’t often seen as real people by the rest of us, hence the title, which recalls Ralph Ellison’s classic novel of Black-American life, Invisible Man.

Even the setting is invisible: It takes place in Anzin, in the north of France, an industrial town without much industry. It’s not a tourist destination, or a place that features much in the media. It’s one of the depressed areas that, until recent unrest, people paid no attention to—the French equivalent of “fly-over” territory. One of Petit’s achievements is to put this invisible city on the map of our sensibilities. He films the scenery in an unobtrusive way which doesn’t hide its drabness but also makes us feel how this place, for some, is home.

We’re introduced to Audrey and Manu, who run a home for troubled women. It’s not clear whether the establishment is public or an NGO, nevertheless it runs on municipal subsidies and has to obey certain rules. The women should come for part of the day, then go back to their homes, families, or … wherever. It isn’t supposed to provide services like education, training, or therapy. Audrey and Manu are bound not only by red-tape, but the Catch-22 that ensues. While their charges are happy with the atmosphere at the center, and feel solidarity with each other, they don’t make much progress in their lives. So they keep coming back, which must mean it’s failing—risking a cut-off of funds. The two social workers decide to let the women stay overnight if they want, and to provide training to prepare them for the work world—although this also risks a cut-off if it gets out.

Audrey (played by Audrey Lamy) and Manu (Corinne Masiero) hold Les Invisibles together, its heart and mind respectively. Audrey is a fragile woman who doesn’t have much of a personal life, doesn’t earn a packet, lives with her brother. Lamy gives her character tremendous empathetic power, in addition to near-bipolar shifts from giddy optimism to despair, and these emotions are infectious. Masiero is equally well-intentioned but sensible and crusty, with a hard-boiled anti-charm. 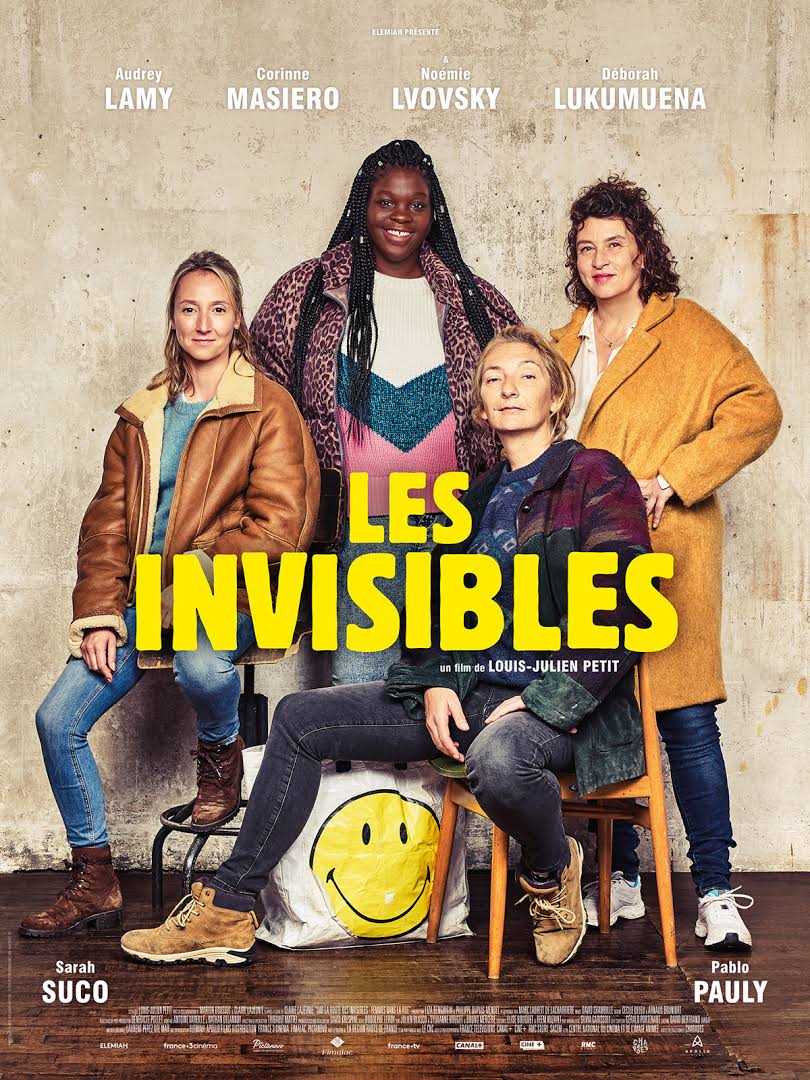 Poster for the film “Les Invisibles”

The supporting cast consists of a few volunteers and “clients”—women who come to the center first to seek refuge or hang out, and then to learn how to interview for a job. They’re young and old, native stock and immigrant, married and single. They’re all excellent, and so natural we wonder if the director used non-actors. The stand-out is Adolpha Van Meerhaeghe as Chantal, an older woman with a wealth of skills, especially repairing appliances, but with an aversion to withholding the truth—especially the fact that she learned her skills in prison, where she served a healthy stretch for killing her abusive husband.

Also affecting is Déborah Lukumuena as Angélique, a volunteer of African descent. She’s well-meaning but hyper-sensitive, a bit unstable, and nearly quits the group several times. We’re a little unsure whether she’s a volunteer or “client” (she’d been homeless in the past) and reminds us of the liminal situation of the characters—they could go either way, depending on the breaks of life, how they’re treated, or their mood at a given moment. This is also illustrated by another volunteer, Hélène (Noémie Lvovsky), whose marriage collapses during the film. At least Audrey works things out with her boyfriend, but in this film even the good men seem beside the point. Likewise, the male director of Les Invisibles succeeds by juggling all the film’s disparate elements, but otherwise remaining discreet.

Photo: A clip from the Les Invisibles youtube trailer

In some ways Les Invisibles resembles One Flew Over the Cuckoo’s Nest, except in the latter film the misfits were trapped in an oppressive mental hospital overseen by Nurse Ratched, a sinister figure the hero had to overcome in order to liberate the inmates. Here, the center is a home away from home, a place for unfortunate women to socialize. It’s run by women who nurture their charges, though they realize they must enable them to make their way in the outside world. Then the film reminds us of The Full Monty, as Audrey and Manu conduct training sessions and filmed rehearsals, and accompany the women to interviews. In the ‘80s British feel-good the unemployed men became Chippendale-type dancers and achieved a hard-fought happy end. The women in Les Invisibles obtain little victories, but they remain tenuous. A disturbed young woman inadvertently causes problems for the rest, and the patriarchy—even in the do-good bureaucracy—is always ready to strike, with police violence in reserve. Our intrepid ladies at least get in a last laugh.

The last laugh doesn’t happen only in movie-land, it turns out. Louis-Julien Petit did in fact use a non-actor in Les Invisibles, none other than Adolpha Van Meerhaeghe, who gives the most remarkable performance in the film. Even more remarkable is that Ms. Van Meerhaeghe’s personal history mirrors that of her character (and in fact inspired it). She too knew violence and abuse, homelessness, homicide and prison. She made the Mother of All Comebacks, writing about her life, giving performances about it, acting, and now venturing into art. Credit goes not only to her own spiritual resilience, but also to psychological and social carers, and to her fellow actress Corinne Masiero, who also knew hard times. For these women becoming visible was an achievement, but only the first step.