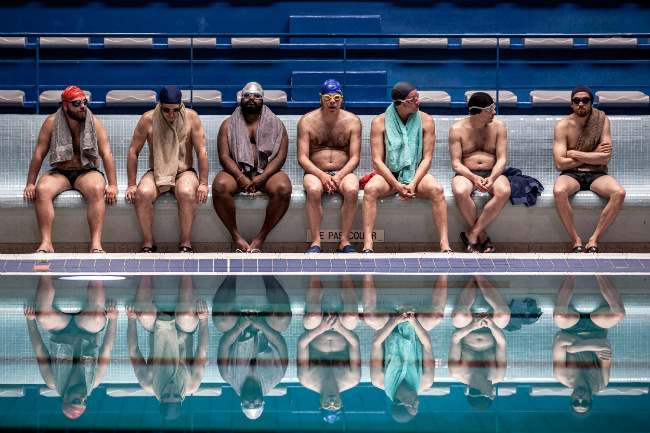 It may be said of any art: the “inciting incident” for the creation of it is merely a curiosity followed.

French director (and firstly, well-known actor), Gilles Lellouche, was inspired to create his new film, Le Grand Bain, after seeing a documentary about male synchronized swimming. “I was interested in people doing things on the margins,” he said, telling members of the press at a conference after the film screening.

Le Grand Bain (in English, the film has been titled Sink or Swim) is about a motley group of misfits who band together to join a male synchronized swimming team, led by their coach, a recovering alcoholic, Delphine, played with deft and depth by Virginie Efira.
(She started drinking following the devastating disbandment of her synchronized swimming team.) Delphine sits on the diving board during practices, chain-smoking and reading books, and in between, shouting orders at the men.

“The project was five years in the making,” said director Gilles Lellouche of the film, at the press conference. “I wanted to talk about people who weren’t doing well….it’s a question of human curiosity, really.” 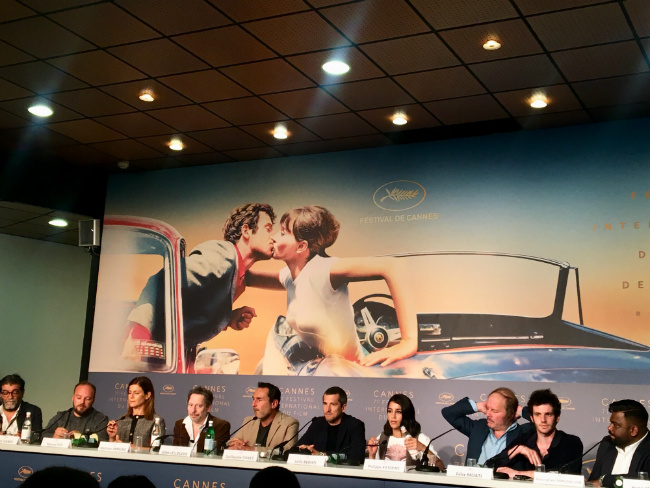 We see all the members of the team going through their own daily struggles. Protagonist Bertrand (Mathieu Amalric) has been unemployed for two years and is suffering from a terrible depression. Laurent (Guillaume Canet) has a sick mother who calls him “hideous and ugly, like a monster” and a wife who leaves him, taking their child with her. Others among the crew are plagued with crippling debt, strained relationships with their children, career dreams deferred, and feelings of loss and loneliness.

One team member tells his daughter, as he is cleaning tables in the cafeteria at her school, to keep her standards high, and that if she does: “…this sponge will not be your fate.”

When coach Delphine falls off the wagon, coaching duties are taken over by Amanda (Leila Bekhti), who also coaches the victorious men’s water polo team. Coaching the synchronized swimmers with drive and ferocity from her wheelchair, she is seen leading them on runs in the rain, barking orders at them, and more. 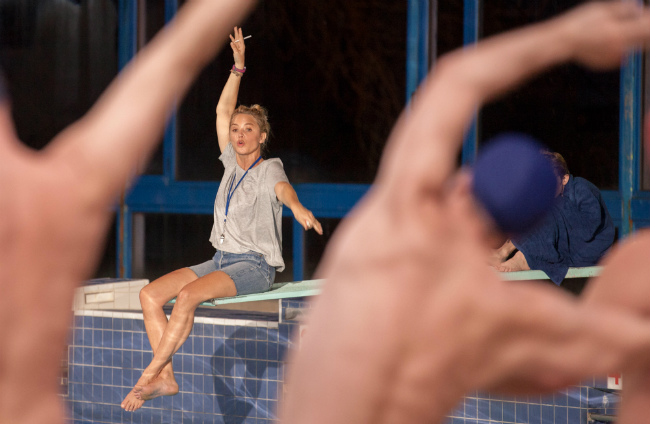 “We just want to take part,” one of the men on the team says, after they’ve registered for the World Competition for Men’s Synchronized Swimming, which is to be held in Norway.

“You just want to take part?!” she barks, shocked that they don’t have ambitions of winning. She – and Delphine, who makes a welcome return after a fall from grace – coach the men as they develop a routine to the song “Let’s Get Physical” for the grand competition. I won’t spoil the outcome of the competition here, but this ending was a satisfying one, and I was surprised by it (only for the reason that it seemed a departure from familiar French endings).

“We didn’t think that we’d be here in Cannes. We were flummoxed and amazed by the whole thing,” said Lellouche to the press. “The public in Cannes can be very demanding. So we were very pleased with the reaction [to the film].”

“I had confidence in what he [Lellouche] asked me to do,” said Canet, of working with the director.

The surprisingly sweet and touching movie, with a somewhat silly presence, was well-led by Lellouche. His directorial career appears to be a bright one.

Previous Article Paris Hotel Buzz: What’s New This May
Next Article “That’s what I do. I take risks,” John Travolta tells French audiences at Cannes