The Whistling World of “La Gomera” at Cannes 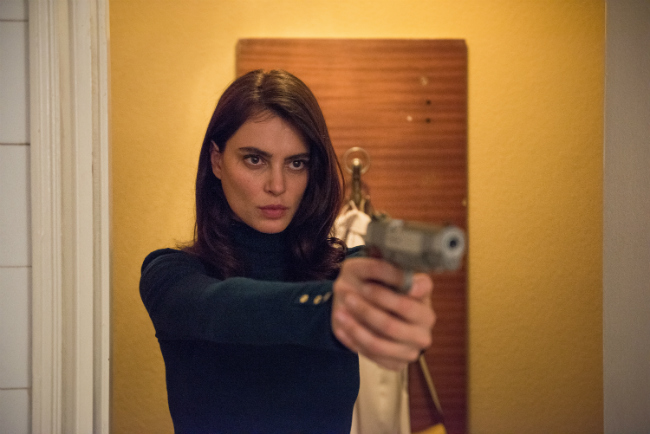 La Gomera was one of the hotly anticipated films at Cannes Film Festival this year, and for good reason. This film, which is screening in the Competition category, comes from the mind of Romanian director, Corneliu Porumboiu.

Porumboiu’s 2006 film, 12:08 East of Bucharest, earned him the Caméra d’Or prize the same year. No stranger to Cannes, Porumboiu’s latest feature, La Gomera (English title: The Whistlers), was drawing a lot of buzz along the Croisette before it even screened. It has been called his “biggest project yet.”

Porumboiu has said of the famous French film festival, and screening his films there: “Every time I’m coming to Cannes, I have this type of emotions…This time, I think that they’re a little bit more.”

And, having now seen it, it is easy to see why this film-noir-esque piece has struck such a chord. We meet Cristi (Vlad Ivanov), a police inspector from Bucharest. A mysterious woman, Gilda (Catrinel Marlon), comes onto the scene in a red dress and with raven-haired locks – and in a flash, the film is elevated with her beauty, glamour, and mysterious ways.

“She Moves in Mysterious Ways…” the U2 song goes; a song which could have been written about this femme fatale character. Gilda’s beauty, though, is secondary to her character, which is layered and complex. A Variety critic noted, however, of her role in the film: “…it’s galling to see her treated as, essentially, the trophy that Cristi may or may not earn through his actions.” With this, I agree.

Cameras track Gilda’s movements with Cristi. They are being followed. Gilda pretends to be someone she is not, so that they can fool the cameras tracking them. She instructs him to give her money, to make the assumed role seem more plausible. She wants him to “come with me to the Canary Islands.”

There is a heist, a death, missing drugs, mattresses stuffed with money, some shady characters, and a journey to La Gomera, a small island in the Canary Islands, where Gilda has led him. On La Gomera, there exists an ancient “whistling language,” used by the Gaunches, an aboriginal tribe, to communicate. Police inspector Cristi learns this language; Gilda teaches it to him. The use of it, in the end, saves him. And it leads him to love, too.

There’s a fun tongue-in-cheek thing that director Porumboiu does in speaking and engaging with – via the film’s characters – movies themselves.) Cristi has his boss meet him at a John Wayne movie. In the hospital, his nurse appeases him by putting on a movie. And, in the best of these moments, a film director comes into a scene, saying he is scouting locations for his next film. The fictional director has just interrupted a high-stakes drama moment in the narrative of the heist.

The humor, overall, is on point in this film. It’s a hard task to make a dark film full of blood and murder be funny. Porumboiu succeeds; his biggest project yet was a well-plotted feature full of comedy, noir, love, lust, adventure, and, in the end, happiness. And it all comes together in – of all places – Singapore, far away from La Gomera.

I guess you’ll have to watch it for yourself to learn why.

Previous Article A Tasty Treat by Christelle Brua, Appointed Pastry Chef to the Elysée Palace
Next Article Behind the Scenes at the Moulin Rouge with one of its Sparkliest Stars