“Jeanne” Views Joan of Arc in a New Light at Cannes 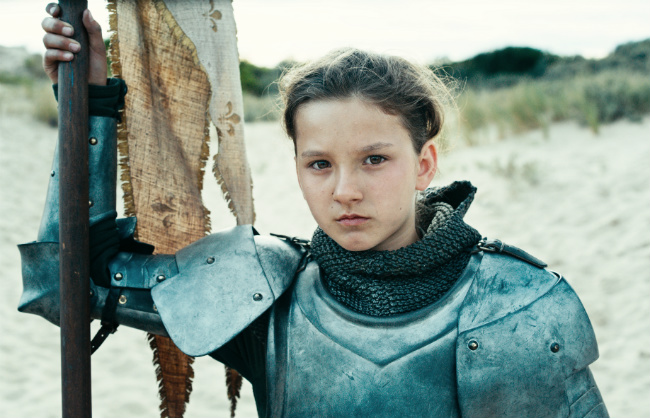 The story of Joan of Arc (Jeanne d’Arc) is legendary not only in her home country of France but also throughout the world.

Centuries after her death, Joan of Arc is still at the forefront of many people’s minds. And the new film from director Bruno Dumont shows this. (Jeanne is Dumont’s second film about the famous teenage saint; his first was Jeanette: The Childhood of Joan of Arc.) Jeanne was the logical next step for Dumont in the exploration of the tale.

“It was like a heavy metal rock opera,” a Romanian journalist told me at the Cannes Film Festival, where Jeanne debuted this week, of Dumont’s first Joan film, Jeanette. “People in Romania hated it. I’ve never seen so many people walk out of a movie…”

With this in mind, I took my seat at Jeanne trepidatiously, yet with hope and optimism, too, ready to see a new film with fresh eyes.

For a bit of background, if needed: Joan of Arc was a teenager-turned-saint in 1400s France, hailing from Domrémy-la-Pucelle. Born in 1412, and killed in 1431, she was canonized as a saint of the Catholic Church on May 16, 1920. Her feast day is this month, on May 30. Joan is celebrated for not only her wartime bravery and fight against the English during the Hundred Years’ War in France, but also for the visions and voices from God which she heard. It was those voices which led her into battle and strengthened her fortitude and determination.

Dumont’s Jeanne shows these things: the voices, the determination, the brave and wise-beyond-her-years soul. But the film is flawed, in a conventional sense, at least. It failed to resonate with the audiences at Cannes (the ones with whom I sat, at least). The film was epically long. To be sure, the story of Joan of Arc is an epic tale in every sense of the word: grand, dramatic, heroic, and exhibited on a large and extraordinary scale. But sometimes the biggest punch is packed in smaller spaces, with tighter performances, and with fewer words.

The film was weighty and reliant on the dialogue. The script was so heavy-handed at times that it seemed like the script was being used as a crutch. And it didn’t need a crutch; the actors were strong, the story of Joan is endlessly compelling, and the direction was clear. This said, the film overall fell a bit flat for me.

Overly verbose, and certainly overly long, as its running time kept creeping closer and closer to that of Avengers: Endgame, which has a run time of a whopping 3 hours and 2 minutes.

We meet young Joan in 1429 and see her through the next couple of years to 1431 before she is burned at the stake. She believes God has chosen her for battlefield glory, and in turn, ends up leading the King of France’s army in the war against England. She is captured and tried for heresy. From the moment the audience meets Joan, we get a sense of her piety: she is on bended knee, looking to the sky, deep in prayer.

From there, the film slowly trods along, accompanied by an opera-like technique where songs play to tell the story. Though, the actors do no singing. Joan is in full armor. She rides her horse, which dances to drums, towards battle. (This scene was pretty neat; a convergence of horses doing synchronized, patterned movements.) The entire film’s score is songs sung over a strange, eerie, 1980s-reminiscent ska/techno-beat. (Sound weird? It was.) It reminded me of the music you’d hear in 80s and early 90s video games.

The images of young Joan are powerful ones, and Joan was well cast (Lise Leplat Prudhomme). She wore her armor heroically, and carried her waving flag with a strength unseen for someone of her age. Sword in hand, hair pulled back, chain mail around her neck – she is small but mighty.

While this film was not my cup of tea, I appreciated the intent and the artistic effort behind it. As President Theodore Roosevelt famously said (in a sentiment often invoked by researcher Dr. Brené Brown):

“It is not the critic who counts; not the man who points out how the strong man stumbles, or where the doer of deeds could have done them better. The credit belongs to the man who is actually in the arena, whose face is marred by dust and sweat and blood; who strives valiantly…”

The opinion of Jeanne by this critic (moi) matters far less than the sweat, grit, and heart that went into making this film. Bringing a story and an artistic vision to life is an act of tremendous bravery and vulnerability (not unlike the bravery and vulnerability shown by Joan); that is what counts most. Dumont saw his vision through, and that’s more than most can say of theirs.

In promotional materials distributed at Cannes, Dumont’s choices and intent are highlighted:

“Bruno Dumont’s decision to work with a ten-year-old actress re-injects this heroine’s timeless cause and ideology with a modernity that highlights both the tragic female condition and the incredible fervor, strength and freedom women show when shackled by societies and archaic virile orders that belittle and alienate them.”

One could not help but see correlations between this story and the current goings-on in the U.S. as states are increasingly suppressing women’s rights. Exiting the film, as Joan has just been handed a death sentence for her beliefs, one has to wonder: Have we progressed all that much since 1431?

For more dispatches from the Cannes Film Festival 2019, click here