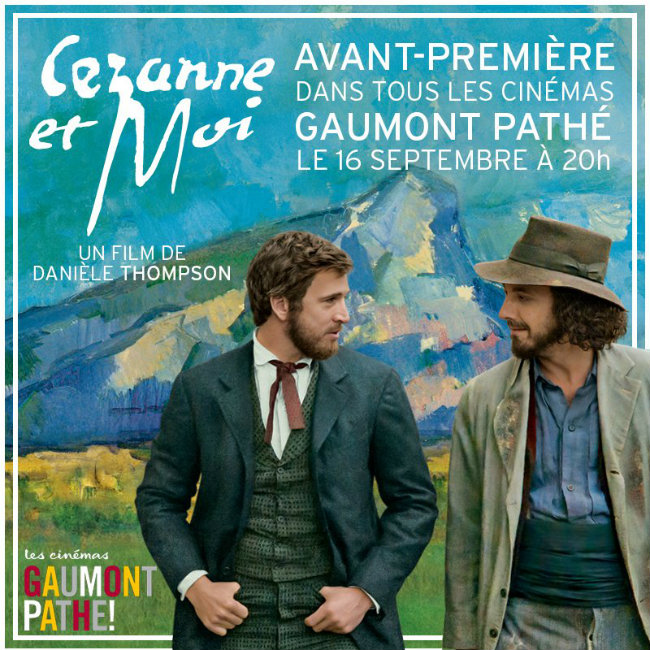 Cézanne et Moi (literally Cézanne and Me), Danièle Thompson’s ravishing historical biopic—double biopic!—sheds light on a little known fact: that two of France’s (and the world’s) great, groundbreaking figures, the writer Emile Zola and painter Paul Cézanne, were life-long friends, going back to childhood. The movie has an irresistibly dramatic hook: A work that Zola has written, L’Oeuvre, about an artist, was loosely inspired by Cézanne, who is outraged, convinced that the novel is a libellous roman à clef. He storms into his friend’s house, and they proceed to duke it out (verbally, that is). At different points in the fraught confrontation, the film flashes back to moments in their eventful past, covering much of a richly detailed 19th century.

Thompson has the benefit of two of France’s most brilliant actors to portray the protagonists. Guillaume Gallienne (who played Pierre Bergé in Yves Saint-Laurent) brilliantly portrays the tempestuous Cézanne through a gamut of moods, from affection to despondency to rage. The director (who also wrote the script) depicts his life as an unending struggle against rejection and ridicule, a tale of Sisyphus-like arduousness, though Cézanne manages to finally get his boulder over the hump. Gallienne’s Cézanne doesn’t seem to change much over the years—he continues to be a relentless near-narcissist, self-pitying and disgruntled, but with heroic artistic ambition, as his hair grays and recedes (he grows it long otherwise, and with the beard and sunken eyes, Gallienne looks like the mature Stanley Kubrick).

Guillaume Canet plays Zola in a more restrained, even repressed, way, which creates a strong contrast with Cézanne. His performance, while solid, seems more conventional, similar to the Great Man biopic roles of Paul Muni (who also played Zola). But there’s more development in his character, from diffident would-be writer to accomplished naturalistic author and finally a celebrity with bourgeois trappings—the immigrant who’s made it.

Thompson meticulously recreates the world these two titans moved in, though the Parisian scenes are mostly interiors. The many scenes set in Provence are stunning: flowered fields and mountainscapes shot in ways that evoke the environment that inspired the painter. While the photography is evocative and even original, it’s not especially expressive. The director is more interesting at the beginning of the film, where she shoots fairly quick shots that keep us slightly jittery, rather than lulling us with Ivory/PBS stateliness. But that style (or stylistic tic) eventually gives way to fluid camera movement and soupy music.

Given that the film is about two great artists, it’s frustrating that we don’t see how their painting and writing developed. How Cézanne moved from Impressionism to the sculpted form of his mature work, how Zola became the visionary of French naturalism. These things aren’t easily dramatized, or filmed. Instead we get the surface struggles of the protagonists for bourgeois-like success (though they rage against bourgeois values). We also get a sort of romantic triangle complicating the bromance: the supposedly on-going fixation of Cézanne for the woman he had a dalliance with, and who later became Zola’s wife.

Thompson could be faulted for turning her Big Subject into an A-budget woman’s picture. As it happens, the film is most interesting when the director fixes a female gaze on her characters’ society. We see how artistic ambition, and the complicity between (male) artists, shut out intimacy with women. Also, how portraiture wasn’t purely aesthetic—that it could also objectify women’s bodies, even be a means of aggression. What’s also fascinating is how the artists’ mothers, both major characters, had such strong relationships with their sons (this may have to do with their Italian and Provençal/Occitan roots). The moms are well-played by Isabelle Candelier and especially Sabena Azema, who turns what might have been a big-name guest role into a quietly affecting performance.

Thompson bends certain facts to suit the vision of her film. Cézanne is portrayed as the suffering bohemian, but in fact he could always count on support from his banker father, and eventually came into a large inheritance. Zola is shown as impeccably embourgeoisé, and implicitly put down for it. The film’s anti-bourgeois stance would be more credible if it didn’t put on such airs. The credits prominently state that three of the actors (including Galliene), are “of the Comédie Française”. And the film’s conclusion, spelled out on the screen in elegant cursive, tells us that Cézanne’s crowning achievement after years of struggle was not changing our way of looking at the world, but the fact that scores of his paintings now hang in institutions world-wide. Where’s Vincent Minelli when you need him?