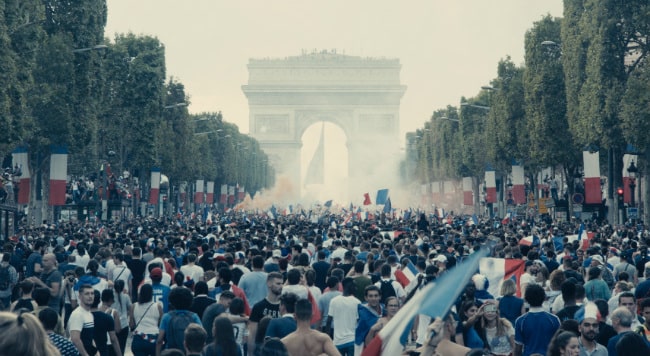 As the saying goes: Begin with the end in mind.

The film Les Misérables closes with a quote from Victor Hugo, author of the famous French novel after which this film is named.

However, this is a modern-day Les Mis, devoid of musical numbers and 19th century-era dress. It bears little resemblance to the novel or musical, save for tense environments driven by economic struggles.

Les Misérables is one of the films in the Competition category this year at the 2019 Cannes Film Festival, and la Croisette is already alit with glitz, glamour, and a bit of to-be-expected Cannes scandal.

Scandals be damned, though. What matters most at Cannes is the films. And Les Misérables, which had its debut the second day of the fest, is a powerful and gripping debut feature film from director Ladj Ly, a Paris native. Ly was inspired to create the film after the 2005 Paris riots.

The film opens with Parisians waving flags victoriously and wildly along the Champs-Élysées. People have taken to the streets to celebrate a soccer victory. (The image of the waving flags is an allusion to a scene in the novel.)

“France is happy today,” the police chief says to three officers in her precinct following the victory. While some parts of France are happy, others are not so much.

We meet Issa at the start of the film. Issa is a boy of around 13 years old who has stolen some hens. “To sell or to eat?” the police officer asks of his intent – the other cop, unsure, shrugs. Obvious comparisons can be drawn to Jean Valjean stealing a loaf of bread at the beginning of the novel Les Misérables.

Issa, in brief police custody, is the window into life in this banlieue of Montfermeil, a suburb outside of Paris. (Montfermeil is where Hugo set the Thénardiers’ inn in Les Misérables; in the musical, it’s the “Master of the House” scene.)

Young Issa and his gang of friends find that trouble follows them (or do they follow trouble? As one police officer suggests).

The police, a special anti-crime squad assigned to Montfermeil, and the residents of the rough-and-tumble neighborhood, are the Capulets and Montaigus of this tale. They are deeply at odds with one another, much like the warring families from Shakespeare’s epic story.

“They trust us,” one cop, Chris, says. “No, they fear you,” the newbie cop, nicknamed “Greaser” (much to his disliking) tells them. He has moved to the area to be closer to his ex-wife and his son; it is his first day on the job. We see the story unfolding through the eyes of the new cop, who is hazed and taunted; his colleagues mock his strong morals.

Poverty is rife. The neighborhood kids entertain themselves by sliding down concrete walls on pieces of cardboard. Racial and religious tensions are high. The police have a difficult job, and yet, they behave so unethically that it’s easier to side with the “bad guys,” the local gang members and the kids who are causing trouble, who are products of their environment – one in which hope seems to be lost.

“It’s easy to live with each other when you have money,” says director Ladj Ly. “When you don’t, it’s a lot more complicated: you need arrangements, little deals…it’s a matter of survival. For the cops, too, they are in survival mode.”

The most impactful aspect of this film is that, despite the portrayal of “good” and “bad,” “right” and “wrong,” what prevails as an enduring theme is the humanity of each character. They are flawed. They are complex. In short, they’re human. Ly illuminated his vision in talking about the character Chris, a racist cop:

“It’s true his role isn’t an easy one. His character is a real asshole, but he still has some humanity, which we also try to show…despite his hateful side, the audience still grows attached to him.”

When Issa steals a lion cub from a “Gypsy” circus member, the entire neighborhood falls down a rabbit hole of violent troubles as a result. Issa is harassed and injured by the police, and the whole event is captured on camera by a drone, operated by a local boy named Buzz. Buzz is a modern-day Harriet the Spy, using his drone to discover all the neighborhood goings-on, as well as to spy on girls that he likes.

The film is rough-and-ready, as intense and violent as it is powerful. Ladj Ly takes the viewer on a gripping journey which feels especially relevant nowadays, given current tensions among police and the people they are meant to protect and serve, particularly in the U.S. and France.

“There are no…bad men; there are only bad cultivators,” wrote Victor Hugo in Les Misérables. This quote flashes upon the screen at the end of the film, following an image of young Issa – prepared to do violence against a cop who has wronged him – fade slowly to black.