Home Cinema 40 Years On, A Look Back at Palme d’Or Winner “Apocalypse Now”

Even before it was finished, Francis Ford Coppola’s epic movie, Apocalypse Now, won the Palme d’Or at the 1979 Cannes Film Festival (which it shared with The Tin Drum). Today, forty years on, preparations are being made for the August release of Apocalypse Now Final Cut, a definitive 4K Blu-ray Ultra HD version, with state-of-the-art enhanced sound and footage. Coppola introduced the new version recently at its screening at the 2019 Tribeca Film Festival. At 183 minutes, it is longer than the original version, at 153 minutes, but shorter than the Apocalypse Now Redux version released in 2001, at 202 minutes.

Coppola is regarded by many as a cinematic genius, but during the making of Apocalypse Now, he was regarded by many as a cinematic madman. The film, whose $13 million budget ballooned to $31 million, an amount that seems absurdly small today, and which suffered so many challenges and setbacks that a person of lesser spine might have abandoned the project, is a tribute to, if nothing else, the vision and perseverance of its creator and all those involved in its production.

But, of course, there is so much else.

The original script, written by John Milius, was based on Joseph Conrad’s novella, Heart of Darkness. It tells the story of Captain Benjamin Willard, whose secret mission it is to search out Green Beret Colonel Walter E. Kurtz and “terminate him with extreme prejudice” – that is, to kill him. Kurtz, played by Marlon Brando, has deserted the army and has set up a kind of hellish alternative army/kingdom in Cambodia with his Montagnard followers, who appear to worship him as a demigod. He has also been killing people; as one general put it, “He’s out there operating without any decent constraint totally beyond the pale of any acceptable human conduct.”

Willard, whose journey up the Nùng River to find Kurtz echoes that of Conrad’s character, Charles Marlow, is both narrator, like Marlow, and participant/observer. It is also a journey into himself. Along the river, he and his small crew, which includes the fourteen-year-old Laurence Fishburne, Sam Bottoms, and Frederic Forrest, encounter a kaleidoscope of people and events that represent the many absurdities of war, and they destroy enemies, real or perceived.

There’s a stop-and-search of an innocent boat family that ends in the rapid-fire killing of them all when the woman impulsively reaches for a basket which, on further examination, contains a puppy. There’s an encounter with the ascot-and-Calvary-hat-wearing, aptly named Colonel Kilgore, played with bravado by Robert Duvall and that includes a scene in which a priest is conducting mass while helicopters thud thud thud across the screen, as they do throughout the film, and napalm is dropped and flames soar in the background, all to the music of Wagner’s “Ride of the Valkyries.” As Milius explained, “Wagner just lends itself to helicopters.” There is a chance stumbling on an evening of Playboy Bunny entertainment, and an enemy attack that results in the death of two crew members. All the while, Willard’s voiceovers reveal him ruminating on Kurtz, the war, and himself.

When they finally arrive in Cambodia, they are met by the jester-like Dennis Hopper playing an American photojournalist who has bought into whatever narrative Kurtz has been espousing. He speaks a kind of hepped up, druggy gibberish, which was, as it happens, improvised, for much of the script was often lacking or written on the fly.

And then there is the encounter with Kurtz. Brando arrived on the set reportedly an obese 300 pounds, twice the size Coppola was expecting him to be. A Green Beret uniform would never fit him because, as Coppola said, “they don’t make Green Beret uniforms in size Extra Extra X-X-X-X-X.” So they improvised and Brando wore black Vietnamese pajamas, and cinematographer Vittorio Storaro shot him in shadow and darkness, and mostly from the shoulders up. The necessity of doing so became a virtue in that it made this already mysterious figure even more mysterious. The scenes between Willard and Kurtz are in fact shot in dark closeups, with Kurtz playing hide-and-seek with the light.

Willard, of course, completes his mission, but before he does, we see Kurtz speaking into a tape recorder. As if to drive home all the hypocrisy and absurdity of the war, he is saying, “We train young men to drop fire on people but their commanders won’t allow them to write ‘fuck’ on their airplane because it’s obscene.” Then Kurtz turns toward Willard, who hacks at him with a machete while a cow is being simultaneously hacked to death by the Montagnards outside, all while the insistent music of The Doors’ song, “The End,” crescendos.

Forty years on – the film was first released in 1979 – Apocalypse Now is mythic for its backstory, and in fact it is remarkable that an ultimately highly acclaimed film could have been created from the chaos of its gestation, for its challenges were both many and legendary.

For example, a fourteen-week shoot was originally planned in the Philippines. When a typhoon destroyed the sets and equipment, production shut down for two months while the set was rebuilt. Thirty-six-year-old Martin Sheen, who played Willard, suffered a heart attack and a nervous breakdown, so was off the set for six weeks (during which time his brother Joe took his place during shooting). At one point, there were rumors that Sheen had died, prompting Coppola to bark, “He’s not dead until I say he’s dead!” 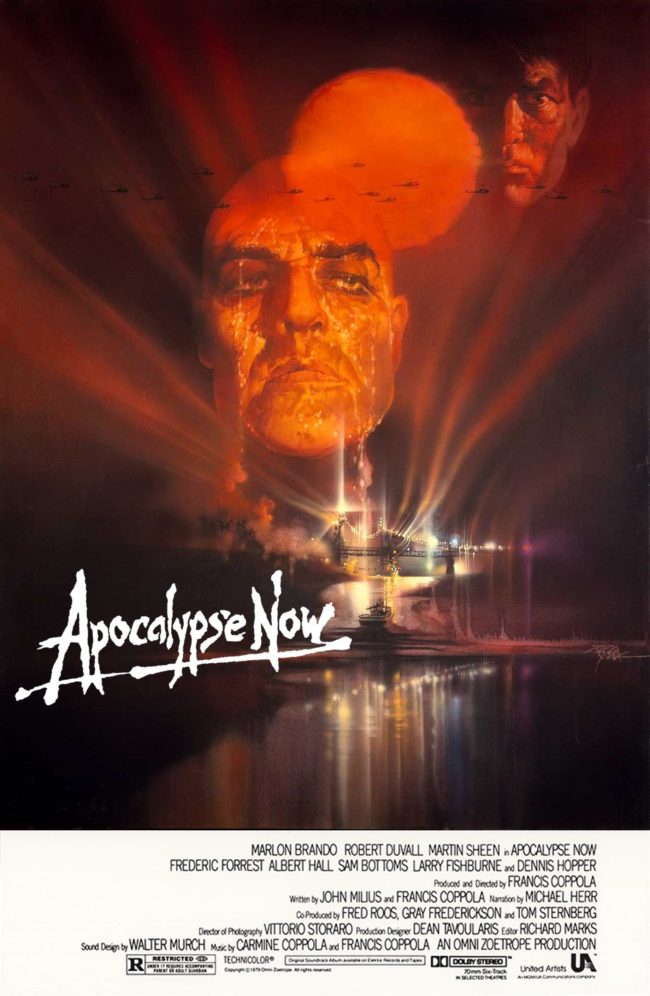 When the movie went over budget, Coppola risked bankruptcy by putting up much of what he owned as collateral to secure additional financing. So great was the stress he was under that Coppola also suffered a nervous breakdown and threatened to commit suicide. “I was in despair,” he told one interviewer. Sheen admitted he “didn’t have a clue” what to do when he got on the set, and Coppola said he “…approached the work with such insecurity, too….” Things were so fluid that, as Coppola said, “…everything [was] being changed right in front of you.”

But for all that, Coppola digs deeply into one of Conrad’s central themes – “…that there is little difference between so-called civilized people and those described as savages,” an idea central to Apocalypse Now, as well. In its two hours and fifty-five minutes, the movie captures the insanity, depravity, hypocrisy, and futility of the Vietnam War. Perhaps of any war. For, while some want Kurtz killed because he is operating “beyond the pale of any acceptable human conduct,” is it also not beyond the pale of any acceptable human conduct to burn villages, riddle innocent people with bullets, and engage in all manner of atrocities war inspires? Was Kurtz doing anything so different from what the regular military forces were doing?

It took four editors to mold the 1.5 million feet of film Coppola shot into a masterpiece. But Coppola was always like the conductor of an unruly and dissonant orchestra molding it into a coherent symphony of sights, sounds, dialogue, and even a moral, let alone incorporating innovations, only one of which was the first use of Dolby 5-point surround sound. In other words, in the end, he was a masterful craftsman who created a masterpiece.

By the end of the movie, viewers could be forgiven for feeling like they have their own case of PTSD, for they are relentlessly exposed to one gruesome scene after another. But that is what Coppola wanted to get across about war.

As Kurtz says in the final words of the movie, “The horror. The horror.”

Now, viewers will get to see Coppola’s definitive version of the movie. The legend lives on.

There is an abundance of information available on the web for those interested in learning more about the making of Apocalypse Now, which is rich in backstory and subtext. Three discussions of particular interest are these:

“17 Fascinating Facts About Apocalypse Now,” by Sean Hutchinson, August 31, 2015, lives up to its title, at http://mentalfloss.com/article/68031/17-fascinating-facts-about-apocalypse-now.

Finally, Eleanor Coppola, Francis’s wife, co-directed with Fax Bahr and George Hickenlooper the award-winning Hearts of Darkness: A Filmmaker’s Apocalypse, which documented the making of Apocalypse Now. It includes riveting footage of an inebriated and shattered Martin Sheen during the filming of the opening scene. Sheen talks about that scene in the discussion with Coppola cited above. It’s fascinating to watch and provides moving insight into the off-script drama of making movies.