Wonderful Weirdness in Paris – The Dali Code & Other Paris Stories 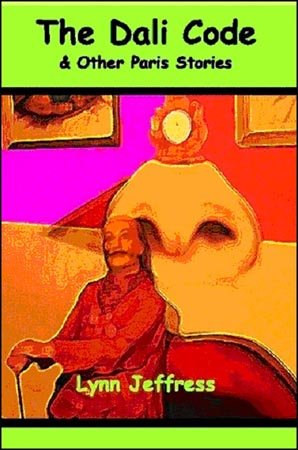 Lynn Jeffress is a normal enough looking woman who wears her hair in a medium length blonde bob, and is generally found in long dark colored skirts, comfortable shoes, and a colorful array of capes and scarfs. She has (like me) reached un certain age, and might at first appear to be a bit conservative.

But the “voice” in her writing discloses a very different person.

In her latest volume of short stories, The Dali Code & Other Paris Stories

Since Lynn until recently lived just across the courtyard from Gertrude Stein and Alice B Toklas’ old digs, I have to believe that Gertrude’s ghost has probably also imparted to Lynn some of her strange literary proclivities.

Lynn has an intriguing way with metaphors and characterization, and two of the many threads that run through these tales are the affect of place and of the weather. Another important character in Lynn’s stories is the City of Paris – but a surreal version of the Paris we are accustomed to.

Each narrator often at first seems to be living a somewhat normal life broken by only relatively minor wierdnesses such as (in “The Oud Player”) being a serially single-food eater never ingesting anyting other than corn and peas; or (in “Somebody Call the Police”) regularly seeing the ghosts of Hemingway, Hadley and Picasso at Gertrude Stein’s apartment across the courtyard or (in “The Dali Code”) being warned by a woman to avoid Montmarte that day because “it’s a nightmare,” or (in “The Full Grec or The Green Fairy”) being invited to find a place to sip absinthe.

What is fun and intriguing, and also sometimes disturbing, is how in each case the day somehow slides into a surreal world – a world that is sometimes hilarious, sometimes horrific.

In “Somebody Call the Police” she advises the reader that “life” in the building has for over a hundred years “ever so quietly wiggled around like maggots.” Then, the building around her courtyard suddenly turns into a haunted world of frightening sounds and noises that she likens to standing at noon on the hottest day of the year, without a hat, forever trapped by wild wind tunnel gusts and fast moving cars racing by on either side of her place in the middle of a highway median strip dividing eight lanes of seventy five mph traffic surrounded by twenty foot high sound walls.

In “The Dali Code”, a walk up to Montmarte becomes a run for her life when a flash flood and high winds cause buildings around Place de Tertre to melt (literally) and after barely escaping arrest by solders at the Dali Museum, she first finds shelter in Sacre Coeur, then runs into Salvador Dali who (by this time having magically ended the storm) takes her into his darkened museum, then unzips his bare chest to show his black heart resting in its glass case.

In “The Oud Player,” the narrator is enticed by the “instant magic” of the guitar playing of a small man who plays “like a gypsy angel,” and decides to form an artistic alliance with the musician to provide background music for her poetry readings. She knows little about him (not even his name) except that he has musical talent, he is Polish, that he reads Spinoza, and he believes that life is “all the same day” where we are still standing naked in the original room with the first cavemen. One day he takes out his Oud (an Iranian instrument) and while playing it faster and faster leads her from the American Museum out to the street and down to the quai where, eventually, thousands of rats follow them.

Lynn is also an expert in creating situations that are just downright hilarious. In “Elder Porn A La Francaise,” an aging female landscape architect from Seattle arrives in Paris with a tiny (and equally old) man to enter what they see as the burgeoning and remunerative business of making pornographic cinema for those seeking to see the elderly getting it on. Our narrator helps them find a film maker known as “Monsieur X” and in one scene that forced me into gales of hiccupping laughter, the “Mermaid” and her “Dwarf Lover” are finally ready for their close-ups late one night on a gravestone at Pere LaChaise cemetery when the Mermaid hesitates (probably because of the reality of the cold night and cold stone) and responds to an inquiry about Baudelaire by shreaking “Who in the fucking Hell is Baudelaire? If I won’t do it with my man here I’ll be damned if I’ll do it with Baudelaire. Tell him ‘no’!,” after which she finally strips down and the two senior citizens go at their love making with gusto while cameras roll and Monsieur X reads Baudelaire’s poems out loud, and a stranger with a wheelbarrow walks by from time to time (and finally, at the end, winks at the narrator as he walks off).

Don’t ask why the cemetery entrance gate simply swung open at 10:30 at night, or who the little wheelbarrow man is, or why our narrator so easily gave up her tiny apartment to the Mermaid and the Dwarf and slept on a park bench.

This book is a gem. It is fun. It is curious. It is sometimes disturbing. It is never, ever boring. The Dali Code requires not just one but several readings, because each time there is something new to find.