Home Archives Why I Love The Eiffel Tower 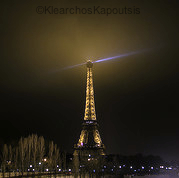 His and Hers: Madame and Monsieur Share Reflections on the Eiffel Tower

The Eiffel Tower is known worldwide as the most recognizable landmark of Paris. It is a destination to which every sightseeing pilgrim must go, to be checked off the list of must-see places in Paris along with the Arc de Triomphe, the Champs-Elysées, and the Louvre—check, check, check. And while some might visit le Tour Eiffel once and never return, moving on to other must-see attractions, I return each time I visit Paris.

My first glimpse of the Eiffel Tower on arrival to Paris validated my presence there; I really was in Paris. Spying the tip, peering at me over zinc rooftops, turning a corner and finding it suddenly, greeting me, arms akimbo (if indeed there were “arms”) with feet planted wide, it is one of my secret pleasures. Unlike the modern, omnipresent and unpopular Tour Montparnasse asserting its monstrous phallic authority over the modest 18th and 19th century buildings of the Left Bank, the Eiffel Tower is a monolith of the Belle-Époque. Feminine in form with frou-frou delicacy, she resplendently yields to the Neo-Classical and Beaux-Arts buildings of the seventh arrondissement, cherished and pampered, a regal courtesan.

Queen of Paris, standing tall, sturdy legs planted deep into the soil of the Left Bank, her Cyclops eye keeping watch, circling over Paris at night, luring tourists worldwide like some sort of Gargantuan Siren. Her mythological beauty and astounding carriage destroy the most fervid Francophobe’s resistance to Paris with her charms, for indeed, is there anyone who can say that they do not like the Eiffel Tower? Paris without the Eiffel Tower is as absurd a proposition as New York without its Empire State Building, San Francisco without its Golden Gate Bridge, Rome without its ancient Roman Forum–one cannot imagine one without the other. It is, in fact, the first image conjured when one says “Paris.”

The power of her majesty, last reigning queen of France, la Tour Eiffel, is seemingly boundless. Her effigy, her portrait in miniature, bestows an immediate cachet to all manner of product, consumers bewitched by her image with such promise: key-chains, t-shirts, decorative pillows, tote bags. I myself am not immune; at home we have an arrangement of Eiffel Towers small and large, a bit of her majesty’s potent power contained in each one. Lending an air of cosmopolitan sophistication, of taste and style, they proclaim to all visitors who would listen, “These fine people have traveled; they’ve worldly, urbane tastes.” And though this kind of statement is something I’d like to muzzle, there is another magic that I welcome from my talismanic icons: these miniature Eiffel Towers are my rosary, succor and a bit of Popeye’s spinach on days filled with crying children, crowded buses, and burnt dinners. They’re an odd bit of comfort, a portable piece of Paris if you will, tiny icons, poupées for a girl who longs for the real thing. 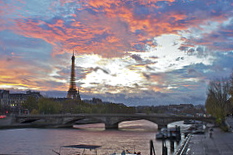 Le Tour Eiffel was built in 1889 for the International Exhibition of Paris and she entered a cruel world where such luminaries as Zola, Maupassant, Verlaine, and Dumas fils called her “useless, monstrous, disgraceful, hateful and ignoble,” among other insults. As a Francophile and fledgling writer, I like to imagine rubbing elbows with my literary heroes in Zola’s salon. But as a fervent admirer of this splendid monument, my endless platitudes would have been met with universal derision among the prominent fin-de-siècle artists and intellectuals who signed the petition against its erection. For at the time of its début, the Eiffel Tower was a symbol of France’s technological prowess, everything my romantic heroes were against.

Try as I might to see the tower through their eyes, stripped of all symbolism and associations, I still can’t help but find the massive iron structure utterly charming. I now live in a time where we seem unwilling or incapable of manufacturing anything of beauty (see la Grande Arche and la Tour Montparnasse, to my eyes truly monstrous) not to mention the modern architectural disasters of my own country. Whenever I am walking about Paris, and I spy the tower on the horizon, I cannot fail to acknowledge it. “Regardez-là, c’est la Tour Eiffel!” I exclaim gleefully to my wife, who responds in kind, our attention momentarily diverted from whatever wonderful thing at which we had been looking. My favorite view is from the end of the rue l’Université after having just turned from avenue de La Bourdonnais–the tower looms suddenly overhead, the effect of which is as remarkable as if Mount Fuji had materialized before one from thin air.

I must also find an excuse to mention in this article the view we had of the tower from our attic apartment on the Île-St-Louis. We could see just the upper quarter of it, and I remember watching the sun set behind it while the spotlight rotated on top. Thirty minutes later it was dark but still I starred at the light as if hypnotized, wondering if any Parisian were at the same moment doing likewise or if I were behaving as only a tourist would. Surely Paris must be tired of it by now; as early as 1909 they wanted to tear it down because it was “no longer useful.”

Le Tour Eiffel has many uses now. Besides being a lucrative tourist attraction, is a handy prop for telecommunications antennae. I cannot overstate its usefulness to me as a venerated totem—a beacon of hope in a world turned ugly (the very world that Zola et al. feared in 1889). As long as it stands, I know I can always hop on a plane and in ten miserable hours stand beside one of its legs as a child would its mommy.  You may read this and think me irrational, but I’m not the only person I know with dozens of miniature Eiffel Towers in his home and office, although I am the only person I know with a four-foot cardboard display Eiffel Tower, found discarded in a box by the curb one morning. I couldn’t believe it then and I still cannot believe it now, that someone could so carelessly have tossed it aside in an act one may almost regard as blasphemy. All Eiffel Towers represent to me, if nothing else, Paris, my spiritual home.

This updated classic BonjourParis article by Dana Jemison and Geoffrey Jackson was originally published in 2003.

We think you’ll like this collection of Eiffel Tower postcards with reproductions of vintage images , just one selection of many items available from the BonjourParis Marketplace.