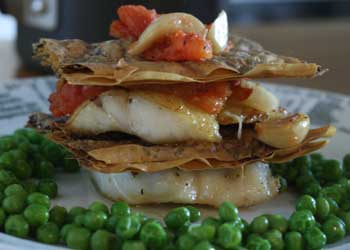 The 2009 Tour de France is almost over, in a matter of days they will be strolling onto the Champs Elysees and then comes the long wait for the 94th Tour de France to start next July. Not only do the riders finish on Sunday, but my annual Tour de French Cuisine will end on Sunday as well. In its second year, the culinary tour of France follows the Tour in its regions and towns highlighting some of the history of the towns and villages as well as specialties, wine and cheese. It has become quite a labor of love, with an immense amount of research and cooking to get each stage as authentic as I can.

The Tour began on July 4th in the world’s second smallest country of Monaco. On the menu is Oignons À La Monégasque, sweet and sour onions with raisons slow cooked, serve on a toasted slice of baguette. It was fantastic. Another specialty of Monaco is Barbagiuans, fried dough filled with Swiss chard, mushrooms and truffle oil, savory and very flavorful.

Stage 2 left Monaco and headed into the Provence region and the town of Brignoles but not before passing through Nice. When it comes to food, you can’t go to Nice without having Socca, thin chickpea flour and olive oil crepe made over an open fire and served hot with salt and pepper. The perfume capital of France, Grasse is the perfect place for squash blossoms, and even better a squash blossom filled with goat cheese and fresh Herbs de Provence, lightly battered with flour and a little corn meal for a little crunch. Stocafi is made with salt-cod cooked in a tomato broth with small vegetables. Using green peppers, onions, capers and nicoise olives, the flavors worked great together.

Stage 3 begins in the second largest city of France in Marseille, skirting the Camargue and the Mediterranean and ends in La Grande-Motte. Created in Marseille at La Maison Doree, the classic Tapenade with black olives, anchovies and capers is purely Marseille. It can be served on a slice of baguette or incorporate it into a dish as I did in the Millefeuille de Loup en Croustillant de Tapenade, Tomates Confit et Poêlée de Différents Pois or Napoleon of sea bass and tapenade with tomato confit and peas. Layers of phyllo dough stacked and buttered and a surprise layer of tapenade. Along with tomato confit, and sea bass, it is a stacked masterpiece of color and taste.

Stage 4 was the team time trial in Montpellier, the coastal town in the Languedoc region. Beurre de Montpellier is a butter all their own, with shallots, gherkins, capers and anchovies makes a great butter to serve on fish.

Stage 5 starts at Le Cap d’Agde and ends on the Catalan city of Perpignan in the south of France. From the Soups of France cookbook, a French onion broth soup served with the classic slice of bread with a twist of Roquefort from the nearby town of Rouergue and covered with gruyere cheese and baked until golden and delicious.

Stage 6 heads into Spain and visits Gerone and travels along the Costa Brava and ends in the capital of the Cataluyna, Barcelona.  Mixed grill-Catalan style of prawns, scallops, red peppers and onions grilled and flavored with olive oil and sea salt, and served with Pan Con Tomate. Pan Con Tomate can be found with every meal in the area and is simply a toasted slice of rustic bread, kissed with garlic and then rubbed with a half of tomato.

Stage 7 leaves Spain and Barcelona and travels to the small Pyrenean country of Andorra. A typical dish of the principality is trinxat, which is a potato vegetable dish topped with bacon. The fantastic French chef Eric Ripert lived in Andorra for some time and he had a recipe for the traditional dish that turned out great. Potatoes, Swiss chard and kale with a head of garlic. It would make for a great winter time dish.

Stage 8 winds its way back onto French soil after leaving Andorre-la-vielle and arriving at the Ariege town of Saint Girons. When it comes to the Languedoc region, there is one dish that stands above all others, Cassoulet. With soft white beans, tender pork or duck, crisp slices of baguettes and the kick of salty bacon, it is the perfect blend of all flavors.

Stage 9, the start town of Saint-Gaudens is the capital of the ancient region of Comminges in the Pyrenees. Traveling through the Pyrenees and over the Col du Tourmalet and ending in the town of Tarbes. Tarbes is famous for its white beans used in traditional Cassoulet. With its proximity to the Basque region, the pepper, onion and tomato dish, Piperade is a popular topping served over fish, pork or as Julia Child would do it, over an omelet.

Stage 10, has now traveled to Limoges located in the Limousin region toward the center of France and traveled North to the edge of the Loire region and the town of Issoudun. Lentils are grown in more than one place in France, the Puy de Dome lentils of the Auvergne are some of the best but the same lentils are grown in the Berry province of the Loire Valley as well and are known as the Berry Lentils.

Stage 11 departs the Loire region and the town of Vatan and heads into the heart of the Bourgogne region and ends in the town of Saint-Fargeau. Of course you have heard of the famous red wine in what could be the greatest vineyards in the word. But the Burgundy region is also the birthplace for some of France’s most famous dishes, Escargot and Boeuf Bourguignon. What could be better than a meal that starts with Escargot and moves onto the famous slow cooked stew of meat, onions, carrots and some wine?

As the Tour moves around France, stage 12 starts in Tonnerre in the Burgundy region and then ends in the Lorraine region in the village of Vittel. But one of the best things to come out of Lorraine is the classic Quiche Lorraine, a simple crust filled with eggs, cream and bacon. The flaky buttery crust and the dots of butter on the top give an amazing and rich taste to a dish that could be a light dinner with a salad or perfect for a brunch.

Stage 13 starts in Vittel in the Lorraine region in the upper NE corner of France and borders Belgium, Germany and Luxemburg. Alsatian Vinaigrette, Salade de Tomates or Tomato and Gruyere Salad and Salmon with Sorrel Cream Sauce all on the Alsatian menu featuring the flavors of Alsace. The most popular desert to come out of the Alsace region is the Kougelhopf, a raison and almond cake that is a little more of a bread then a cake. Baked in a special pan similar to a bundt cake pan, the peaks are dotted with almonds and then a shower of confectioners’ sugar dusting the top.

Already onto stage 14 and the Tour leaves the town of Colmar and heads to the Franche-Comté region. The finish town of Besancon lies between Switzerland and the Rhone Alps and the Vosges region of Lorraine. The flavors are a little richer and cheese is very prevalent in a lot of their dishes. The cheese of the Franche- Comte is dense, smooth with a hard texture with a texture and taste of very close to a Gruyere. Morel mushrooms are grow in abundance in the region and are seen in regularly in dishes in the region.

The Tour starts stage 15 in the French town of Pontarlier which is just 9km from Switzerland and in the Franche-Comte region. Traveling into Switzerland and high into the Alps and finishing in the village of Verbier in the Swiss canton of Valais. We are in Switzerland, so what else should we have? If you guessed Fondue, you are correct.  A classic and traditional Swiss fondue has to include Gruyere and Emmental and served with cubes of bread, potatoes, gherkins and sliced cured meat. A perfect meal on a cool night.

There is still a week to go before Paris, and I must savor every moment. The Tour de French cuisine still needs to go to the French Alps and a small side trip to Provence before traveling North back to the Ile de France and finally onto the Champs Elysees.

There is much more information on all these towns with recipes and pictures of all the dishes and more on my website daily.

The French Open is now…open!