Home Archives Something a Little Different: Street Art in Paris 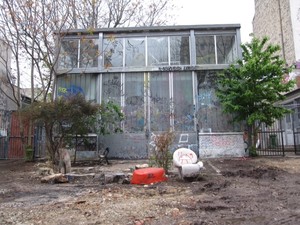 I have to admit, when I heard of a walking tour featuring street art in Paris, I was a bit skeptical. This is a city where every building, whether residential or commercial, not only has a distinct charm, but history as well. The thought of seeing the defacing of that, combined with flashbacks of my former city of New York covered in graffiti during the 1980’s, definitely left me feeling uneasy. Living a short distance from the tour and embodied with a curious, if not masochistic, temperament, however, I decided to join one of Alternative Paris’ Saturday morning outings, which start in the Oberkampf district, wind through Menilmontant, and descend through Parc de Belleville before concluding in its respective district. 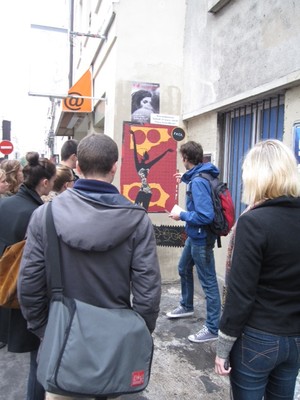 It was an overcast Saturday morning when I arrived outside the Parmentier metro station to meet the rest of the group and our guide. After a year and a half of success in London, the company decided to start conducting street art tours in Paris this year. Our guide previously ran the tours in London and was a street artist himself, so he was incredibly knowledgeable from the start. The company also markets the tour to hostels, so the majority of our group was made up of young, artistic-type tourists. After a brief round of introductions, our group of about a dozen made its way down rue Édouard Lockroy, where we were shown our first piece and my view of what street art actually is, quickly changed.

The group looked upwards to take in a large bandaid constructed out of plaster by artist, Jimmy Pansement, which he places over building cracks throughout the city. It was here that I became truly pleased to learn the difference between street art and graffiti. Street art is premeditated. Rather than just writing their names with a bottle of spray paint, these artists work in studios to produce materials that they then use to provoke a conversation about a particular aspect of society. Sound familiar to other forms of art? 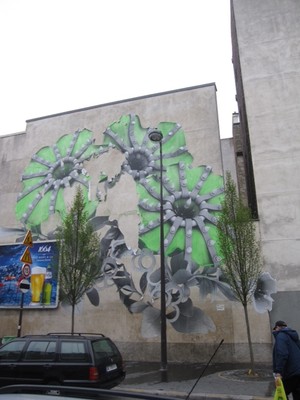 As it turns out, the city of Paris is extremely liberal, and even welcoming, to street artists. The largest piece that we saw on our tour was done with the permission of the town hall. The artist Ludo is known for his style of combining painted grey mechanical elements with fluorescent green flowers to enact “nature’s revenge” on the city. The entire wall of a building in Oberkampf features this compassionate theme, as grey handcuffs hold down the stems while prison-like chutes constrict the flowers’ attempted movement. The acrylic painting has been up for close to a year and as portions of it begin to erode and take on new shapes from weather and time, the picture continues to produce new meanings on its own.

My personal favorite pieces came from the duo of Leo and Pipo, who use a form of wheat paste to depict real characters and events from the 1920’s and 1930’s on the exact area in which they occurred. The masked vintage photographs and campaign posters could easily be mistaken for current-day images by a passerby, if he/she didn’t stop to take a closer look. If anything, that is the goal of street art, to encourage individuals to slow down and look–in every direction. 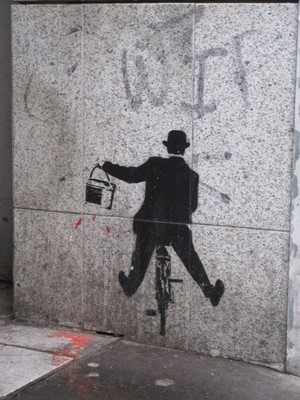 A Parisian street art tour would be impossible to conduct without running into the mosaic-tiled works of the artist, Space Invader, who has more than 1,000 delicately-crafted pieces up throughout the city, inspired by the 1978 Japanese video game of the same name. Other world-renowned street artists such as Shepard Fairy, who developed the infamous “hope” graphic of President Barack Obama during his 2008 campaign, also have a presence in Paris. Fairy’s “Obey” series features a “big brother” figure regarding pedestrians below with a menacing, authoritarian glare. British artist Nick Walker, who often rivals his co-patriot Banksy, is known for his “vandal” character. Painted in all black through the use of a stencil, the character, in a black bowler hat, is shown on a bicycle fleeing the scene after “painting the town red.” The character carries a bucket of red paint that is also dripped onto the sidewalk.

At 107 rue Oberkampf stands Le M.U.R., a wall that the city has turned into a competition for street artists. Every four weeks, the chosen artist is selected to create a billboard on the spot, which he or she then paints in public throughout the course of one day, providing onlookers with a terrific chance to see one of these artists at work. During our tour, we saw a work by Artiste Ouvrier displayed on the wall, which through the use of stenciled paint, depicted a landscape inspired by his visits and love for India.

Besides viewing and learning about the various popular works and street artists featured throughout Paris, the tour also takes visitors through offbeat streets that one would probably never transverse in their everyday life, let alone on vacation. The group walked through mud and piles of rubbish to enter into a community practice area in Menilmontant that was just covered from pavement to wall tops with graffiti. We were also led to several artist squats and communes that both enacted surprise that these spaces exist within the postcard mindset of Paris, and a bit of fear, as we were a group of English-speaking tourists with backpacks. This was especially clear at La Forge in Belleville, an abandoned key factory turned artist commune, which is now in danger of either high rents or demolition due to a change of ownership.

The tour stopped at the top of Parc de Belleville in the 20th arrondissement, where the group was able to take in an expansive view of the city as rain drops began to fall. We wound through the park to rue de Noyez, which is entirely covered on each side with both street art and graffiti. This is entirely legal here, which was surprising to me, as there were several everyday shops underneath the vibrant colors. The tour ends on this street outside of the gallery, All Over, which opens at 2 pm, right after our three-hour tour concludes. I decided to skip waiting for the gallery to open and take the short walk back home. I was hungry, but my brain was already beginning to digest.

For more information on street art in Paris and the tours being offered, please visit the Alternative Paris website.

Writing from the Heart…in the Heart of Champagne