Home Archives The Sky Over the Louvre 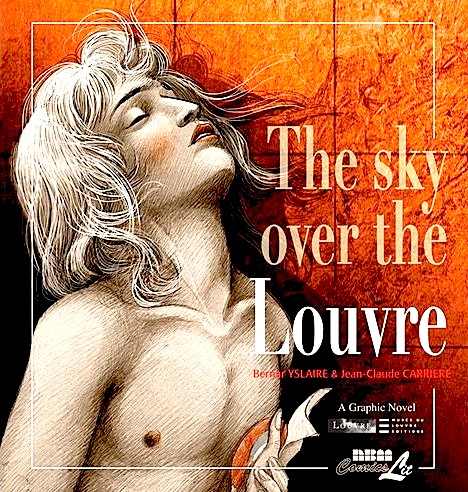 If you get to page 830 of Simon Schama’s Citizens: A Chronicle of the French Revolution, you’ll know that Robespierre decided that the Revolution required an image to replace the discarded idea of God, so he asked Jacques-Louis David to produce a painting of the new “Supreme Being.”

This story would make a lively chapter in the endless battle between art as personal expression and art as propaganda, but Schama doesn’t exactly explain how it all played out. David was obsessed with the features of Joseph Bara, a 13-year-old “martyr” of the Revolution. This was, he knew, not what Robespierre wanted, so he dawdled. Robespierre grew impatient—he began dropping hints that the ideal visage for such a figure was his own. Fortunately for David, the political compass twirled and Robespierre discovered firsthand the unpleasantness of the guillotine blade.

There’s more­—a splendidly ironic punch line. But if you want the full account, you need to read a comic book. Excuse me: a graphic novel. Another surprise: This one has A-list credentials.

You see, the sponsor is the Louvre. The artist is the esteemed French cartoonist Bernar Yslaire. The writer is Jean-Claude Carrière, the favorite collaborator of Luis Buñuel; he wrote the screenplays for Belle de Jour, The Discreet Charm of the Bourgeoisie and That Obscure Object of Desire, among others.

But still…a graphic novel? If you’re Old School like me, you haven’t jumped into this craze. At best, you think it’s a good idea for wired kids who grew up on comics and don’t have the attention span for real books. But for adults, a reasonable response to graphic novels would be: well….why?

The Sky Over the Louvre

provokes a different response. Interest, for one. Understanding—even mastery­­—of a fascinating historical/art episode, for another. A powerful and enjoyable esthetic experience, for a third. And then, just to be shallow, there’s the cool factor—on a coffee table, this book makes you look good. (To buy The Sky Over the Louvre from Amazon, click here.)

In a mere 66 pages, Yslaire and Carrière pack in a book’s worth of information. They start with Jacques-Louis 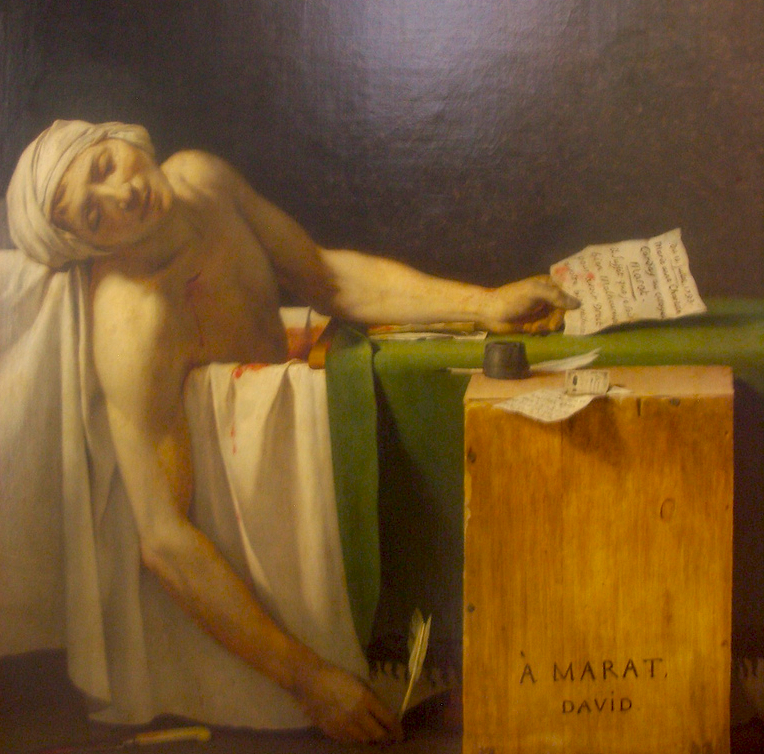 David painting the portrait of Marat, murdered by Charlotte Corday. Marat is, David says, “like Jesus on the cross.” But that comparison no longer works—the Revolution has done away with religion. “There’s no longer any angel in Heaven,” David tells Robespierre. “The new Heaven is empty.”

Heaven, like Nature, abhors a vacuum. To Paris now comes a young Slavic boy. He has long, straight blonde hair—he looks like an androgynous blend of David Bowie and Iggy Pop. He meets Jacques-Louis David, who is taken by his looks. And this is not a small thing. David not only lives and works in the Louvre, he is a member of the Public Safety Committee—he has the power to send people to their deaths. For an artist, David is a deft politician; though he has received commissions from the discarded, despised nobility, his neck seems safe. And so he begins to paint this boy.

The plot is a thriller: what kind of portrait will David make, and will it be “correct” enough to please Robespierre? But along the way, the thrills are intellectual. What can be celebrated when traditional forms no longer apply? Does the invisible need “to be made flesh?” Witch hunts and executions—at what point does the killing become addictive? And what is it about extremism that attracts the irrational and the violent?

David acknowledges he can never paint a Supreme Being. He doesn’t respond to Robespierre when his friend’s life is in danger (“I have a terrible cold, can’t you see?”). And after he survives the bloodletting, he­­—oops, there’s that great twist in the ending.

Was I self-conscious reading this book? Not once. Did I get a better sense of David and Robespierre? Yes, and quickly. Was I grateful for the art history lesson? Yes, and also for the way the paintings in this book are accurately copied and for two pages of artistic references.

And, almost accidentally, I came away with the same conclusion that Schama reached: history may jumpstart because of high food prices or some other economic event, but human personality is the biggest factor in the making of leaders. Quite a heady idea, considering the form in which these ideas are presented.  More smart, beautiful hardcover comic books for grownups, please.

Photos courtesy of Amazon.com and bixentro.

Let Context Travel take you on a guided, in-depth, semi-private tour of the Louvre’s French Masters. Beginning in the Cour Marly, one of the museum’s most beautiful spots, an expert art historian will unveil the mysteries of some the most famous French masterpieces. To keep reading or book a tour: Context Travel Tour Louvre French Masters.

This complete, chronological history of the golden age of French art includes more than 400 lavish illustrations. Written by Henri Loyrette, president director of the Louvre and former director of the Musée d’Orsay, Nineteenth Century French Art: From Romanticism to Impressionism, Post-Impressionism, and Art Nouveau covers painting, sculpture, and architecture, as well as the advent of photography, its impact on painting and its emergence as an art form of its own. Indispensable for the serious art enthusiast.