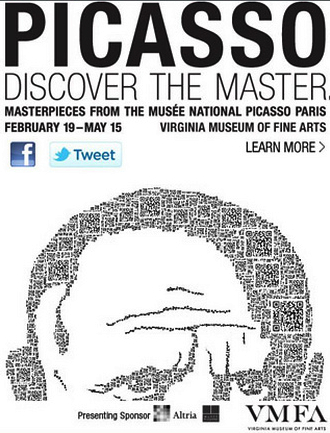 I didn’t get to Paris this spring, but I can’t complain because Paris came to me. I couldn’t believe my luck when I learned masterpieces from the Musée National Picasso Paris [1] were being exhibited at the most unlikely venue: Richmond, Virginia, about two hours south of Washington DC. As the capital of the Commonwealth of Virginia, Richmond is rather staid and nondescript, but it does boast a hidden gem: its newly renovated Virginia Museum of Fine Art (VMFA). The VMFA definitely scored a major coup as the only East Coast stop for Picasso: Masterpieces from the Musée National Picasso, Paris [2], a must-see Picasso exhibition, which will be making global appearances in far-flung corners of the world such as Helsinki and St. Petersburg.

At any given time, in any major city in the world, it would be a safe bet to assume that at least one or more examples of Picasso’s prolific creative output are on exhibit. Over seven decades, it is estimated that Picasso produced close to 70,000 works. He created countless paintings, ceramic objects, sculptures, assemblages, prints, drawings and photographs. The guy was a phenomenon, a veritable art machine churning out one masterpiece after another. How did he do it? Considering that Picasso equated sexuality with creativity, one theory is that as an inexhaustible lover and leaver of women, he never lacked a fresh muse. That may be so, but it takes a rare genius to produce works of art which would forever be synonymous with the intellectual and artistic movements of the 20th century.

I have been privileged to visit a number of Picasso exhibitions over the years, but what makes the Musée National Picasso Paris collection so very special is that its holdings represent the artist’s personal selections. Picasso himself considered these works “keepers,” a sort of visual autobiography, claiming that “the paintings, finished or not, are the pages from my diary.” My fellow artists and I often joke that much of our accumulated work finds its way “under my bed.” Fortunately for Picasso, he was successful enough during his lifetime to acquire a number of homes to accommodate his extensive collection. The Musée National Picasso Paris, currently closed for renovations, houses the artist’s collection and is devoted to the life and prodigious career of Spanish-born Pablo Diego José Francisco de Paula Juan Nepomuceno María de los Remedios Cipriano de la Santísima Trinidad Ruiz y Picasso.

One of the definite advantages of seeing Masterpieces from the Musée National Picasso Paris in Richmond is that the works are so accessible to the average viewer. Perhaps a little too accessible. I experienced some anxiety as I witnessed museum visitors practically touching the art and getting so close that the glass-covered works were just about fogging up! But it didn’t take me long to take advantage of this chance to examine the art at such close range. What I particularly admire is Picasso’s confident line. He was not one to agonize over a color or a stroke of the brush. “Quand je n’ai pas de bleu je mets du rouge!” (If I don’t have any blue, I use red!) Whatever medium he chose to work in, he made his mark with tireless confidence, conviction and passion.

Diversity, deconstruction and disintegration over the decades

When he moved to Paris in 1904, the classical, academic works of his youth gave way to a lifelong experimentation with stylistic modes of expression including impressionism, symbolism, cubism, surrealism and abstraction. 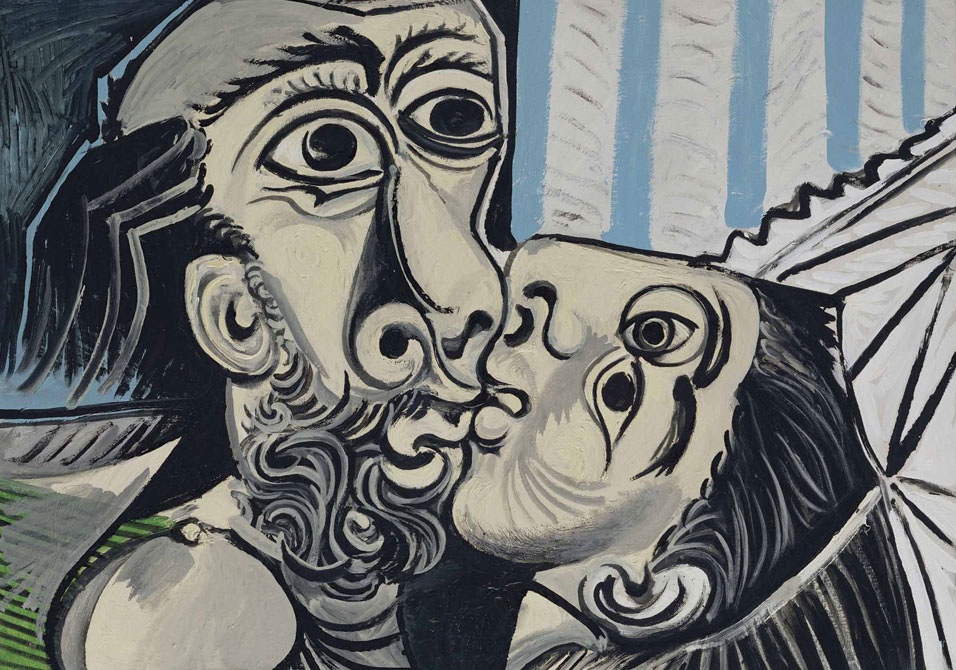 This exhibition is particularly notable for curating the works to showcase the progression and overlap of these different influences. It was this visual kaleidoscope which really brought home the gradual disintegration of the female form apparent in Picasso’s later works. Starting with romantic portraits and moving onto geometric cubist deconstructions, Picasso’s women end up as grotesque representations of their former selves. The hands and feet become elephant-esque, the face undermined by crude suggestions of the pubis and breasts. Two later paintings depicting copulation and kissing resemble a fight to the death rather than an intimate get-together. Perhaps the revolving door of lovers was starting to be too much for the aging artist!

New York’s prestigious Gagosian gallery is currently featuring its own Picasso show based on the work he produced while under the influence of the much younger muse Marie-Thérèse. And across town, visitors are flocking to the MOMA to catch Picasso Guitars through June 2011. But this is one time where Richmond, Virginia trumps New York City. The VMFA’s show successfully presents a comprehensive overview of the master’s oeuvre, imparting a real sense of Picasso’s voracious appetite for life and art. In Picasso’s case, the two are one and the same.

(VMFA exhibition open through May 15, 2011) Then the exhibition continues San Francisco [3].