When writer Sidonie-Gabrielle Colette was asked what her life’s dream was, she haughtily replied: “And what would I do with a single dream?”

While quantity seemed to matter to Colette, I only had one dream—to live in Paris. No other city had the same cachet: it so flawlessly manifested the spirit of romance and opportunity.

Finally, the stars aligned. I was revelling in the flexibility of student life and my boyfriend was pondering a leave of absence. The more we discussed it, the more it seemed feasible. We were also eager to reconnect with family who conveniently lived in Paris. It seemed like the universe was shrieking at us to take a chance: profitez de l’instant!

We were thinking in the euphoric long term so we publicly declared our departure in writing and in person; our one-way tickets were booked, our living quarters arranged.

Each day we would walk across the Pont des Arts. It was the city in microcosm, a montage of unfolding, miniature dramas that defined Paris and Parisians. On cloudless days, painters, picnickers and photographers jostled for space; at night, it was blanketed by students drunk on wine (and youth) and couples drunk on each other. Moonlighting musicians supplied the score near stars embedded in the Seine.

On this bridge, the lovesick had found another way to make the ephemeral permanent: les cadenas d’amour cascaded over its railings like chains.

Naturally, the Parisians detested the padlocks: they were removed from the bridge with much pomp and circumstance.  However, they later returned to reclaim their place on the Pont des Arts—a chivalric outcry against the official culture of Paris.

Whenever my boyfriend—who is Parisian—and I would disagree about anything, he would offhandedly say: “It’s a cultural thing.”

It’s true that Paris is a culture—and state of mind—unto itself. Two months into our experiment, my adopted city was starting to give me a headache. I wasn’t enamoured with the practicalities of living there: When would my French repair itself? How quickly could I get my British passport? Where would I work?

While my boyfriend could sidestep barriers of language and culture to a certain extent, the tides of wanting to belong tugged me in every direction. And the Parisians were as elusive as the city itself, keeping me at arm’s length while they bumped into me at every turn.

New York Times journalist Milton Mayer described this paradox in his article on the Parisian state of mind:

“The American goes to Paris, always has, and comes back and tells his neighbour, always does, how exorbitant and inhospitable it is, how rapacious and selfish and unaccommodating and unresponsive it is, how dirty and noisy it is—and the next summer his neighbour goes to Paris. They’re both right.”

Still, there were modest victories: immersed in the euphony of French, I started to glean the meanings of words. And thanks to my boyfriend’s nephews, animal names were added to my lexicon: biche, écureuil, guépard. (This newfound vocabulary did not qualify me as a scintillating conversationalist, but was excellent fodder for road trips and board games.)

Dinnertimes were sacred: small feasts of endives, steak and fromage. Our utensils dipped towards ivory plates cleaving the fragrant air, our napkins feathered with wine stains and breadcrumbs.

We were beginning to picture ourselves as more than bit players in these Parisian vignettes.

Just Trust Me for Now 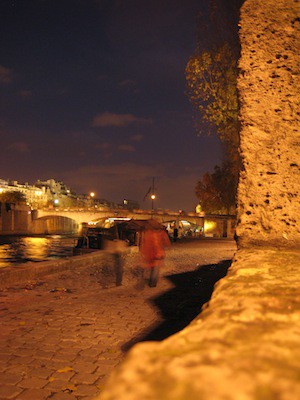 As it turns out, our love affair with Paris did not guarantee the city would love us back. We were only meant to be part-time residents of Paris for now—our long-term plans abridged by the realities of economics and employment.

We made one last visit to the Pont des Arts. At sunset, the padlocks resembled the relics of unrequited love. (I had heard that some had been removed and re-sold as scrap—a cruel finish to an auspicious beginning.)

I was reminded of what writer Adam Gopnik, who had lived in Paris, had to say about public displays of love:

It did seem like our dream had had a short run. But that night our Parisian future seemed no less sublime for being finite. We dispensed with the tenses; now there was no mood but the imperative.

Please spread the word about Bonjour Paris and send an invitation to your friends to receive the newsletter. In advance, thank you.

Previous Article Francoise
Next Article A Memorable Day in Champagne