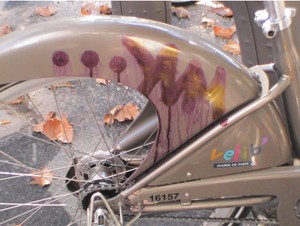 The recent Parisian dispute over noise pollution, pitting sleep-deprived residents against clubbers, has been rife with ironies of the best-laid-plans variety. For example, partisans on both sides agree that the law banning smoking in commercial establishments has had the result of moving smokers and noise outside (below apartment windows).

What’s also interesting is the irate locals weren’t just traditional residents displaced by hipsters livening up districts in the east of Paris and the 9th arrondissement. Some of the complainers are from the ranks of gentrifying bobos, who are aging, coupling (in PACS if not traditional marriages), having children, and working lucrative but demanding jobs that require a good night’s sleep. The clubbers who supported musician Eric Labbé’s petition against noise regulations putting Paris to sleep are younger and poorer. This is characteristic about how Paris’ move towards Greenery—more than any other major European city—is opening a class divide.

A decision by the Mairie of Paris to facilitate non-automobile transport was the construction of bus lanes closed to conventional vehicles (though taxis tend to make use of them). The raised barrier enclosing the lanes prevents cars from stopping or parking at the side of the street. This has been catastrophic for shopkeepers located on large thoroughfares. One hairdresser whose shop was on one of the marechaux around Paris blamed the bus lanes for his business’ failure. “Many customers would drive in without an appointment on their way from work. That became nearly impossible with the construction of the PC (petite ceinture buses) lanes.” The creation of similar bike lanes has aggravated the problem.

The latest large-scale “greenification” project is the tramway which will eventually encircle Paris. These will replace the PC buses (and maybe eliminate those bothersome bus lanes). But the tram infrastructure takes years to build, meaning that roads around Paris and the portes leading in and out of the city have become congested. A notaire who travels frequently for his work says that the construction has made his work difficult. Another notary went further. Asked if the tramway system’s completion would mean the end of commuting headaches, he pointed to another consequence. “The tram line will completely ring Paris and make entering harder. It will discourage people coming in.” He implied this was not just a matter of discouraging outsiders’ cars, but suburbanites in general.

Even the popular Velib’ program has its detractors. Young Parisians, tourists and others are fond of riding the charmingly ungainly gray bikes from one area of the city to another. But a number of users (mostly young and male) have been stealing and vandalizing the bicycles. In some areas the Velib’ docks evoke urban blight rather than the bobo paradise envisioned by Mayor Bertrand Delanoë. Given that the program is beginning to lose money, some are having doubts about ideas to expand the Velib’ idea to cars.

Aside from reforms in transport, the campaign to “greenify” Paris has taken the literal form of creating green spaces. A successful example is the Coulée Verte, which transformed an old railway line into a lush track of parallel bike and footpaths. The Coulée Verte has remained in good condition, free from graffiti and vandalism, and is safe. Will President Sarkozy’s ambitious plans for a Grand Paris replicate this success?

Some versions of the urbanism plan call for converting large areas into parks. The areas in question contain residences and shops in populaire (working-class) neighborhoods. (The urban renewal projects tend to be in the north, not the posh west.) Creating a Grand (or Grandiose) Paris would also make the local identity of nearby suburbs of the Petite Couronne more tenuous. And if there is the positive example of the Coulée Verte, there’s also the negative one of the Forum Les Halles. The massive social engineering there resulted in produce workers being shipped out to Rungis, while drug dealers and loiterers were shipped in. And the only green is in the paint. What do you think?