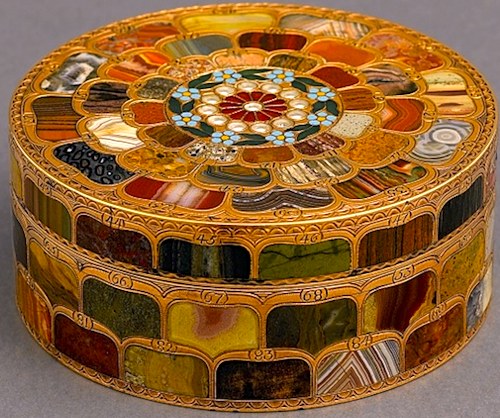 (Gold boxes and objects at the Cognac-Jay Museum)

View one of the largest collections of antique boxes made by master craftsmen of gold and semi- and precious stones, portraits, and decorative arts. Exhibition includes about 240 “objects of virtue,” including boxes adorned with royal effigies believed to have been given by Marie-Antoinette to honor individuals. 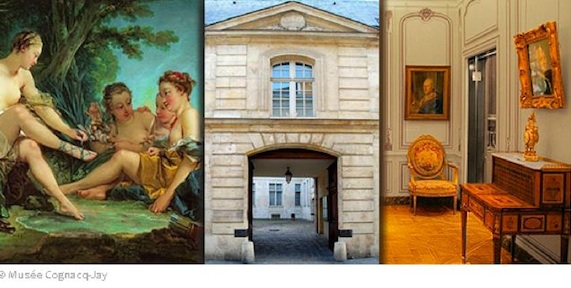 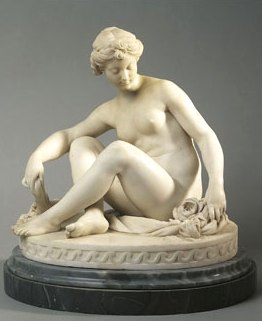 For many people who care about art, eighteenth-century painting, especially in France, seems to be eye candy with a nice thick topping of pornography. The talent is there in the hands of the artists. If you look at the brushwork, the palettes, and the compositions of Watteau, Fragonard, Boucher, Boilly, Greuze, and Lebel, to take the most famous examples, there is a great deal to admire. It is their subjects and their points of view about what they are painting that have earned them the characterization of talented but frivolous. This is not a slander, but it’s not the last word either.

Le Musée Cognacq-Jay [1] in the Third Arrondissement of Paris gives you an idea of what all these artists and many others were up to. Ernest Cognacq and his wife Marie-Louise Jay, the founders of the great Samaritaine [2] department store, spent a good deal of their fortune acquiring art and artifacts from the eighteenth century and installing them in a museum on boulevard des Capucines. The collection was moved in 1990 to a sixteenth-century hôtel particulier on rue Elzévir which was reconstructed as an Age of Reason [3]mansion. In this setting, the paintings and the other works—tables, chairs, sofas, rugs, wall hangings, elaborate wood work, decorative pots for candy, flowers, and everything else imaginable and decorative for someone very rich—are harmonious. They are also, to my slightly subversive eyes, funny and I always find myself giggling or at least smiling broadly. I would not be surprised if the original owners of these works, as well as M. and Mme Cognacq-Jay, did the same. 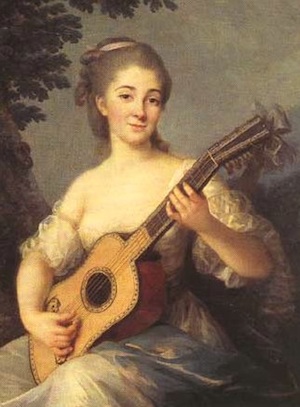 These are works to amuse and delight. This is not art that listened to the classical fist-shaking of Horace who said that art aut delectare aut prodesse est—art is either to delight or instruct . . . and preferably both. The delight is abundant, the instruction, unless you’re an art-history student, is somewhere else.

If you come to be delighted, you will be. Boucher and Boilly alone provide enough bare breasts to make anyone feel like a very happy dirty old man. The cover of the little booklet you get at the information desk has Boucher’s “Diana Returning from the Hunt,” [see top image, left] which sets the tone, with Diana and three under-age nymphs looking cheerful and naked. It is interesting—even instructive—to realize how many of the subjects of all the painters represented in the Cognacq-Jay are smiling.

This is also true of the works by Élisabeth Vigée-Lebrun, one of the few women to gain eminence as a painter in the eighteenth century (she painted Marie-Antoinette with barely two chins). Her “Vicomtesse de Mirabeau” plays the guitar, looks at us, and invites us to guess exactly here her breast ends and the barely-there top of her dress begins. It is to the credit of the collectors and of the collection today that so many of her pictures, not always widely known, are part of the permanent display. 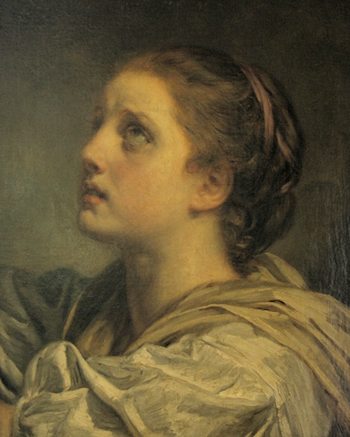 But not all subjects are smiling or exposing themselves. There are several small paintings by Jean-Baptiste Greuze, technically one of the greatest painters of the century. Among them, “Tête de Jeune Fille” is to me astonishing: a painting that stops you in your tracks. There is no background, no decoration, no grace notes to distract from the face of the girl. She is a revelation. Another canvas that I find absolutely riveting is “La Baigneuse” by Johann Anton de Peters, a German and student of Greuze who spent his life painting in France. The woman, just finishing her bath, is covered up, not smiling at us outside the frame of the picture, simply being herself. She is not interested in us.

It is curious, and no one could tell me why it is like this, but before you see the opulent furnishings and pictures and drawings of the eighteenth century, you pass through a small room with three important pictures. The first is by a student or follower of Rubens, the second a landscape by Jacob van Ruisdael, and the third is Rembrandt’s “Balaam’s Ass” in which the angel of the lord looks about to cut off Balaam’s head rather than to tell him to mind his manners. Perhaps Ernest and Marie-Louise acquired these pictures to remind themelves, and anyone who cared to look, how much painting had changed in the course of a century. It is a stimulating apéro. 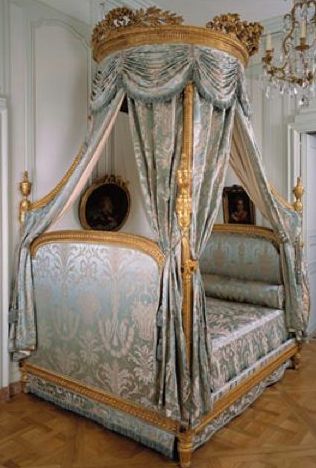 The end of the circuit du musée is the attic—with a roof probably ten meters high and the original beams and superstructure still in place after 450 years. Magnificent work. It is worth seeing for itself as well as for the furniture displayed in the huge room—if your legs hold out. That can be a problem. The museum is on five levels, not counting a level and a half down to reach the toilets, and there is no elevator that I could find. If you have trouble with stairs, you may want only to see the ground floor and the next one. This is a shame, but also the way it is.

Le Musée Cognacq-Jay is not usually crowded, like all museums owned by the city of Paris it is free except if there is a special show, and it is another delight of Paris. It’s worth a trip.

Agnès Dupont [7] is a retired Paris native who enjoys visiting and writing about Paris museums forBonjourParis. Click on her name to learn more about her.

Learn more about this museum and its permanent collection…please click on an image for details.