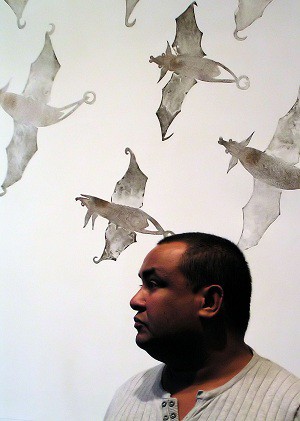 Inspired by ghosts and guided by visions, Australian artist Dennis Nona’s chosen mission is to share his people’s history through his masterpieces.

Born on Badu Island, nestled like an egg in the Torres Strait that snakes between Queensland, Australia and Papua New Guinea, native artist Dennis Nona was immersed in local mythology as an infant. Tales of witches and fishes, magic and wonder weaved an intricate web that captivated him from the time he began wood carving as a young boy.

These legends, passed down through mystical dances and the oral tradition, cast a spell over Dennis while the tribesmen who shared them imbued him with a sense of history that took root deep inside and flowered like the vegetation on the islands strewn across the straits.

The folklore blossomed inside Nona as he honed his talents, dedicating his life to his work and passing along his people’s culture in a less ephemeral medium than spoken word or ritual dance. He etched the ancient myths into linocuts and molded them into sculptures that have won him a variety of awards.

Dennis Nona does not take the responsibility of communicating his region’s culture lightly. Less an individual artist than a member of his Clan, he first approaches the tribal elders before beginning work on any piece and asks for their approval to transform the legend into artwork. Following this, Dennis speaks to the spirit world, reaching out to past ancestors for their consent. These spirits visit him in his dreams and through these visions he finds the images that will tell the tale he’s been entrusted with. 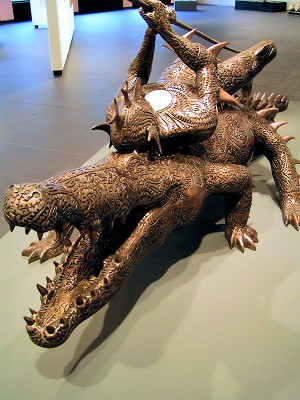 One such fable is the basis of his major piece, the sculpture “Ubirikubiri of the Awailau Kasa”. The legend, carried down through time in the voices and rites of the Crocodile Clan on Badu, tells of a widower who, to console his grieving daughter over the loss of her mother, decides to give her a pet. He first presents her with a puppy, which she doesn’t like so the father then tries a piglet, which pleases her no more than the dog. Then, while out spear fishing near the river, he finds a baby crocodile which he takes home to show his daughter, who adopts it as her own and names “Ubirikubiri”.

Much later, when the crocodile had grown to full size, the man left to visit friends on a neighboring island without feeding the animal first. Upon returning, he went to give some fish to Ubirikubiri, who was so angered at having been ignored that he killed the father, placed the man on his back and headed towards the Mai Kasa. When the daughter returned, she saw the broken cage and discovered her father missing so she followed the tracks to the river. She caught up with Ubirikubiri at Ziba Ziba (the time of day just before the sun has completely set) and pleaded with him to return her father, but the beast shook his large head and disappeared into the black water.

The vast majority of Dennis Nona’s art springs from this deep source. The free exhibition at the Australian Embassy in Paris presents these works with extensive explanations both in English and French so every viewer can appreciate the beauty of the fables. What’s more, there is a bilingual treasure map on hand for children aged six and up.

To escape the winter blahs, why not get away from it all with a free one-way ticket Down Under where, at least for an afternoon, you’ll be transported over distance and time to a faraway land of dreams that you just may be able to make your own.