While there’s enough to do in Paris to keep travelers busy for weeks, a day trip south of the city to Château de Fontainebleau and the neighboring village of Barbizon are well worth the effort. Whether you drive or take a train from the Gare de Lyon, your efforts will be rewarded. Not only can you tour Fontainebleau castle and stand on the “U” (or horseshoe-shaped staircase where Napoleon descended to go into exile on the island of Elba), you can bicycle through the hunting grounds of François I or visit the nearby hamlet of Barbizon, a quaint little town near Vaux-le-Vicomte.

It was in the Barbizon forest that Millet, Corot and Thomas Rousseau created 18th-century masterpieces displayed in Paris museums. It was painting en nature, a school of painting Charles Baudelaire once derided as “a silly cult of nature unpurified, unexplained by imagination with evidence of general decline.” 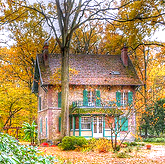 In Barbizon, walk down the rue Grande, past the restaurants and inns where the Barbizon School of Art was born, a movement that was an important stepping stone to Impressionism. With a car you can drive past charming cottages in the forested area.

On my first trip to Fontainebleau, I took a small street train that started at the impressive gilded front gate separating the Place Charles de Gaulle from the Cour du Cheval Blanc where a sentry stood. Riding through the verdant manicured gardens, it was easy to imagine Louis IX or François I hunting with hounds and thousands of others following on horseback.

My main interest, however, was inside the château. Every ruler from Francois I to Louis XV has expanded the central building. The unique fer de cheval (U-shaped) staircase conjures memories of Napoleon’s dramatic farewell as he bade the guards to look after France. “Her happiness is my only thought,” he said.

One may walk through the rooms filled with memorabilia and art. The spectacular Renaissance Salle de Bal, built in 1553, is an entertainment room finished under Henri II. It boasts high ceiling, wood panels and an exquisite view of the Cour de La Fontaine and pond. The apartments of Napoleon show the Salle du Trône with the great throne. The Napoleon Museum in the Louis XV wing is also worth seeing. 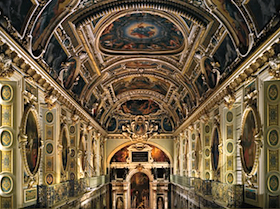 The beautiful park and English garden are perfect for a stroll and bicycles are available to rent.

Just outside the gilded gate at the Cour du Cheval Blanc, the streets open to a gigantic town square with several good restaurants. A short walk into town offers more.

There is no use trying to compare Fontainebleau with Versailles as they were built at different times for different reasons, but the Palace of Fontainebleau is a must for students of history or those looking for a perfect day in the country.

Ice Wines and Champagne for the Holidays