Home Archives A Daily Cup of Joe with Peugeot Frères 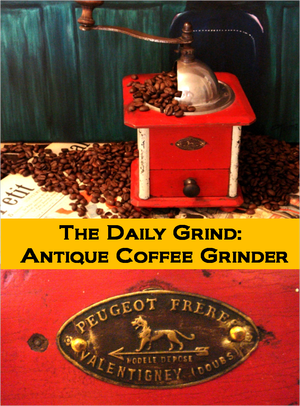 Before there was the flagship store on the Champs-Elysees, in fact even well before Monsieur Peugeot encountered Herr Daimler and decided that the automobile was the way of the future, the famous French Peugeot famille was known for making a simple coffee mill. Today while wandering the flea markets of Paris, antique Peugeot coffee grinders abound and a trip to les puces almost guarantees you’ll stumble over this a relic of a bygone day. Tourists gaggle over this icon of the French cuisine, toting them home across the Atlantic in backpacks and overpacked suitcases, with wives telling their husbands, “It will make the quintessential French kitchen décor,” while husbands ponder its functionality and give an emphatic “Merde” when their luggage checks in a few pounds overweight.

Adored by the French and les touristes alike, the question French flea market goers want to know is if their Antique Peugeot Frères Coffee Grinder is just a showpiece or if it still functions today with the same Peugeot precision as it did in yesteryear?

Putting an end to transatlantic marital disputes, The Antiques Diva’s Tour Company wagers that 90% of the antique coffee grinders found in the Paris flea markets today still function with the same ease – read as blood, sweat, and tears – as they did in their present day. The old-fashion manual coffee grinder was never as easy to use as its modern day equivalent. The early 19th C coffee advertisements weren’t plastered with a devilishly handsome movie star giving an impish grin as he pops a pod into a Nespresso maker. Instead, if they would have had commercials during Emile and Armand Peugeot’s day, the founding father and son of Peugeot would have chosen the George Clooney of the day and asked him to leer into the camera whilst firmly gripping the iron handle on their wooden coffee mill. With sweat on his brow, the 19th C Clooney lookalike would slowly rotate the gyrating grinder until the cool brown beans poured into the top of the contraption emerged below a fine powder perfect for the daily brew. Cut to the actor, with café au lait in hand, relaxing back into his bergère, sated by another experience with his Peugeot Frères Coffee Grinder.

While today technology guarantees the untrained taste bud a nearly perfect cup of espresso every time, coffee aficionados claim that the 19th C French coffee mill provides the right coarseness and flavor for their daily cup of joe. Present-day technology doesn’t allow the beans to slowly transform into a dark, daily elixir; instead it rushes the process, grinding the beans at high speeds, causing the coffee to pick up a burnt flavor as the heat is generated. Roasting and Blending Masters (the sommeliers of the coffee underworld) can taste the difference – claiming that the slow muscle burn caused in one’s forearms by turning the 19th C Peugeot Coffee Grinder enhances the quality and flavor of the bean, allowing it to retain the beans’ original taste and flavor. While it’s clearly an added chore, much like doing an old-fashioned brush and lather shave, coffee connoisseurs agree, the antique French Peugeot Frères Coffee Mill makes the entire experience worthwhile and perhaps worth that excess baggage charge after all. Bottoms Up.

Would you like to immerse yourself in Parisian culture without the...