Once a hilltop fortress and protestant stronghold, Sancerre remains the sauvignon blanc capital of the world

If all roads lead to Rome and, as the saying goes, France is criss-crossed by just such major Roman highways.  One of them lies in the heart of the Berry region, at the foot of the picturesque winemaking village of Sancerre.  The hillside town’s vineyards are said to have been cultivated by the Gauls even before Roman times.  As for the Romans, Sancerre is first mentioned by Pliny the Elder in the 1st century.  Who knows, maybe some of those succulent grapes Cleopatra is so often seen eating actually came from Sancerre’s “herbaceous, citrus flavoured” chardonnay vineyards?

Actually, it’s the work of the local Augustinian monks which first brought its renown to Sancerre.  Sancerre’s wine was already on Royal tables in 12th century France and Guillaume le Breton, naturalist and biographer of King Philippe Auguste (1180-1223) classed the Sancerre vineyard as “one of the finest in France”.  Notwithstanding, the Sancerre production wasn’t always today’s Sauvignon blanc.  The present day vineyard actually owes its existence to a tragic accident.  During Victorian times a small number of British botanists delighted in collecting a maximum number of different varieties of grapes.  In doing so the well-known and equally deadly phylloxerae louse migrated over from its North American habitat and, slipping unnoticed into 19th century European vineyards, flourished, quickly wiping out most of the unsuspecting vines and all of those belonging to Sancerre.  American winemakers came to the European’s rescue by providing their counterparts with a partly resistant grafting stock that saved the day and brought the new, stronger strain of Sauvignon blanc to the region.

Originally from the vineyards of California’s Sonoma County where Chardonnay is a staple, when my teaching  job removed me from the Sancerre region in 1996, after over twenty years of residing there, and moved me on to a village a few miles north of Chablis, I was convinced that these same Chablis vineyards were the Chardonnay capital of the world. It was only recently that I discovered that both Sancerre, but also nearly a third of the Champagne production, also come from white Chardonnay grape stock.  Note that, s lightly drier than Chablis, the Sancerre “terroir” makes Sancerre’s Sauvignon blanc  a perfect match for accompanying the local Chavignol goat cheese, especially when the cheese is “repassé”, that is to say, laid to rest under a damp dishtowel for a week or so in the bottom of the fridge, both products originating from the same flint laden soil. 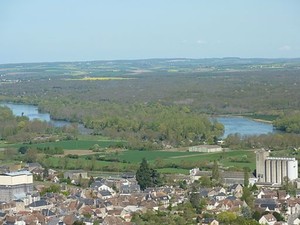 The village of Ménétréol, the lateral canal and the Loire River as seen from Sancerre

Force is to admit that even after many years of having lived in the Berry, the drive to Sancerre, along the plane tree lined roads and local landmarks, is still just as beautiful.  But, of course, you can also reach Sancerre by way of the lateral canal, built in 1835. Renting one of the fully equipped boats called pénichettes or “little barges”, and cycling off to local stopovers, is both a relaxing and leisurely way of visiting the back country of France for a week or so, especially if you decide to join up with another couple or couples.  You don’t need a permit and manoeuvring through the locks is a once in a lifetime experience.  You’ll find a map and an example of a virtual trip here.

The “lateral” canal, once used by commercial barges, runs parallel to the Loire.  The barges are gone now and traffic is mostly limited to family boating.  The rental point begins in the town of Briare, with its remarkable canal-bridge built by Eiffel, the one of tower fame.   For those who choose the southern route, the canal winds through the nearby village of Rogny-les-sept écluses, with its small, historical locks dating back to the 1597 and King Henry IV.   If you’re interested, you’ll find out quite a bit about daily life in France in Jeffrey Greene’s delightful book “French Spirits”, where he tells of his time living in Rogny and the characters that popped into and out of his experience there.  To get a little idea click here.  After Rogny the canal continues on through the picturesque village of Ménétréol-sous-Sancerre, where you can dock overnight and walk or bike up to Sancerre, stopping by the local supermarket for eventual supplies on your way back.

History and drama in Sancerre

To understand why Sancerre is unique beyond both its wines and its architecture, it’s worth taking a moment here to tell its story.  In the years before Henri IV finally signed the famous Edit of Nantes in 1598 according, once and for all, amnesty to Protestants all over France, the teachings of Jean Calvin, (1509-1564), a French theologian who had broken with the Catholic Church and begun publically criticising its rites and rituals, caused religious violence to rage between growing numbers of affluent Protestants and equally stubborn Catholics.

After completing his law studies in the city of Bourges, some 25 miles south of Sancerre, Calvin began vociferously expressing his criticism of the Catholic Church’s non-individual centered rites and riturals.  His new religious philosophy spread across the region like wildfire. But on August 24th, 1575, Saint Bartholomew’s Day, disaster struck.  Charles IX, urged on by his mother, Catherine de Medici, called on all Catholics to prove their allegiance to the King by revolting against Calvin’s followers.  The result was a massacre in which thousands of French Protestants were murdered at the hands of local Catholics.  Of those who survived, many fled to Sancerre and when control of the city of Bourges was lost to the Catholics, they retaliated by killing several local priests and monks. Charles’s soldiers, with support from Bourges, immediately occupied Sancerre in November of 1572, but were forced back and ended up holding the townspeople in siege that lasted for over seven months.

Warfare against Sancerre, during that time, would include an arsenal of arrows, laces, stones, oil, bombards and slings.  Some 500 people, including most of the town’s children, died in the course of the blockade, but Sancerre continued resisting until its population was finally reduced to eating rats, leather, ground slate, and, it’s rumoured, eventually each other.  The king finally signed a general peace treaty in 1573 guaranteeing immunity to all people of Protestant faith and the few remaining survivors filed out of the town to freedom.  Charles immediately demanded 2,000 liters of Sancerre wine be turned over from the town’s cellars in compensation for having defied the will of State, which just goes to show how highly the Court held the local brew in esteem? 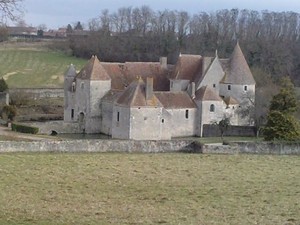 Burlanure, a 15th-century fortified castle in Boulleret, 5 miles from Sancerre, and walking distance from the lateral canal

If you’re thinking of brushing up on your conversational French during an upcoming trip, and possibly also your “wine” vocabulary, Sancerre might be your answer.   The town maintains a private French language school called “Coeur de France”, catering to individuals, couples and even families.  You can find their site here.  The Coeur’s classes include local visits to wineries, putting the “wine” vocabulary lessons to good use.  Actually it’s rare to find French language schools outside of big cities in France and even more so in a place like Sancerre.  While well known to the French, the area is definitely off the usual foreign tourist track, but the center helps place its students in local families during their stay and seems to fit comfortably into the village’s lifestyle.  Local merchants are both friendly and communicative to students, a refreshing change from, or complement to, climbing the Eiffel Tower or elbowing your way up to catch a glimpse of the Louvre’s Mona Lisa.

Do be advised, however, that, if trains are an excellent way to travel between stopovers here in Europe, buses are definitely rare outside of big cities and you’re pretty much on your own when it comes to finding a taxi.  Unless you’re into “trekking” those miles, this leaves you, basically, three options, either travelling by rental car, planning a week on a canal boat or taking the train and, as in the case for the canal boat, cycling inland.  With a little planning, not all, but most trains, do accept bicycles and both hotels and gourmet meals are relatively cheap in the French countryside.  Moreover campgrounds are everywhere and basic camping gear is becoming lighter and lighter for those into cycling nowadays.  With a little planning ahead, you’ll find more than one possibility available in a France intent on catering to its tourists.

Be assured that, whatever the adventure you choose, one thing you’re sure to find is that French people really are just as friendly, helpful, polite, and welcoming in the heart of France as they aren’t necessarily made out to be in a tourist centered city like Paris and what the French like to call their “art de vivre” is one complex, fascinating and enriching first time experience just waiting for you…to happen.

Special thanks to Fabien Perreau for the photo of Sancerre and for all his helpful advice both by telephone and via his Sancerre website.

Photo of the Loire as seen from Sancerre by Henri Moreau, Wikipedia creative commons licence (free use allowed)