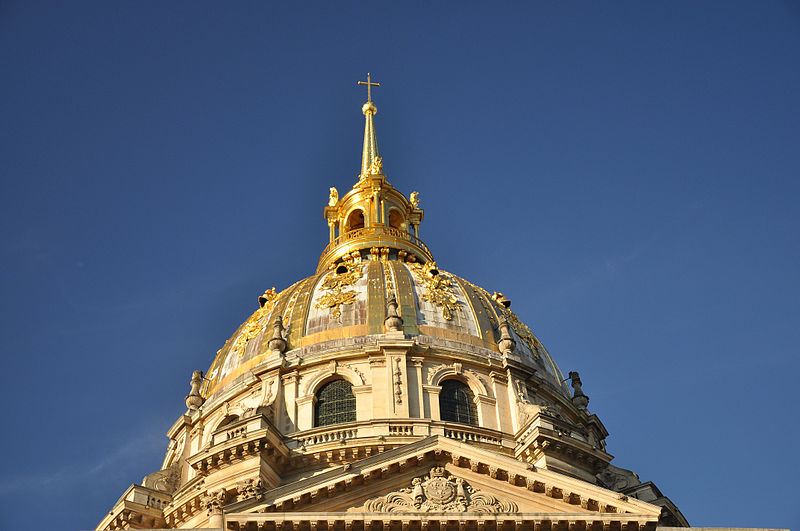 Each quarter of Paris has its own personality and charm but there’s something luxurious about this area. It’s chic, historical and architecturally splendid. How can you miss, with Les Invalides, Napoleon’s Tomb, the Musée de l’Armée or the great art museums like the Rodin and the d’Orsay? How can you beat the walk along the Champs de Mars in the shadow of the Eiffel Tower? It takes only a few minutes to see why the wealthy residents of the Marais moved here in the 18th century. History buffs and people who want to study architecture will enjoy the seventh arrondissement. Aside from the great gardens leading up to the Eiffel Tower, the École Militaire and Les Invalides, there are quiet streets, museums and the French National Assembly.

I arrived close to Les Invalides from the airport. My hotel was in the area and so I headed towards Ave de Tourville. I was impressed by the Alexandre III Bridge on one side of me and the golden dome of Les Invalides ahead. My hotel was De Tourenne, a 34-room, two-star hotel at 30 Avenue de Tourville, near the corner of the busy La Motte Piquet. From my window I had a framed view of the Eiffel Tower. Imagine my feelings as I gazed out at one of the most famous sights in the world. I was close enough to see the elevators taking people to the top.

I changed for a brisk walk and headed for the tower. As I walked past the École Militaire, my mind turned to Alfred Dreyfus, the unfortunate French Captain who, in 1894, was dishonored here after his trial proved him guilty of plotting to sell military secrets to the Germans. He stood in front of the garrison and had his sword broken and epaulets and buttons ripped from his uniform. I tried to imagine his anguish as he walked around the lines of soldiers screaming, “Frenchmen, hear me. I am innocent.” That was proven to be true some years later. 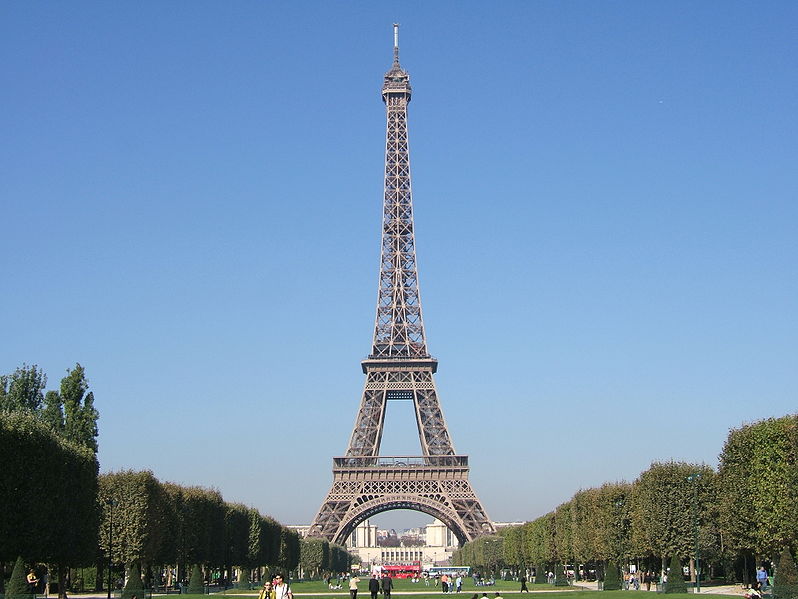 I crossed the Champ De Mars, once a parade ground for officer cadets and a staging ground for ballooning and mass demonstrations. I thought back to the televised concerts I had seen from here, and admired the golden bust of Gustave Eiffel, erected in 1930. This man of vision was responsible for this tower, which was only meant to be a temporary structure, to stand during the Universal Exhibition of 1889 and to help commemorate the centennial of the Revolution. My guidebook reminded me that the tower was the world’s tallest building at 1,051 feet until the empire State Building was put up in 1931.

As I sat for coffee in the restaurant, I remembered a professor telling me about the controversy that surrounded the tower. Apparently, the author Guy de Maupassant was on the side that favored the tower’s removal. After it had been decided to keep it up, he was met by a friend as he had dinner in the tower restaurant, high above the ground. “I’m surprised to see you here,” his friend said. “After all, you opposed the tower so strongly.” De Maupassant frowned. “This”, he said, “is the only place I can sit in Paris without seeing this ugly thing.” 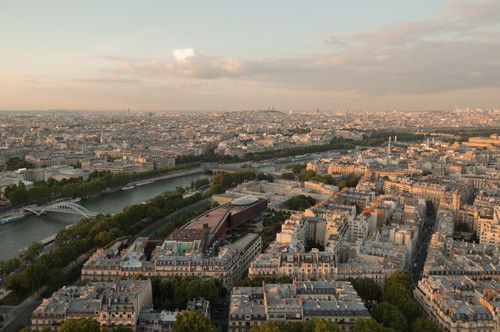 But for me, even with my vertigo, the tower was awesome, with double-decker elevators, a museum with historical clips of the tower’s history and the excellent Jules Verne restaurant 700 steps above the ground. On a clear day, it is said you can see almost 45 miles away but now at the near 900-foot level I looked only at Paris below. It was easy to see the great monuments of Notre Dame, The Louvre, Place de La Concorde and Sacré-Coeur on Montmartre in the distance. Even La Defense, that new area just outside Paris in the west, was plainly visible and enticing.

Later I would see the tower at night, all lit up by 336 projectors shooting beams towards the inside of the structure looks like lace against a dark Paris sky. The powerful beacon, first turned on Dec. 31, 1999, shines so brightly; it can be seen 80 km away. The image of the tower glowing at night will be with me forever.

As I descended, the dizzying heights made me wonder why anyone would be crazy enough to jump from the tower, as one man did when he put on a cape and failed in his attempt to fly. 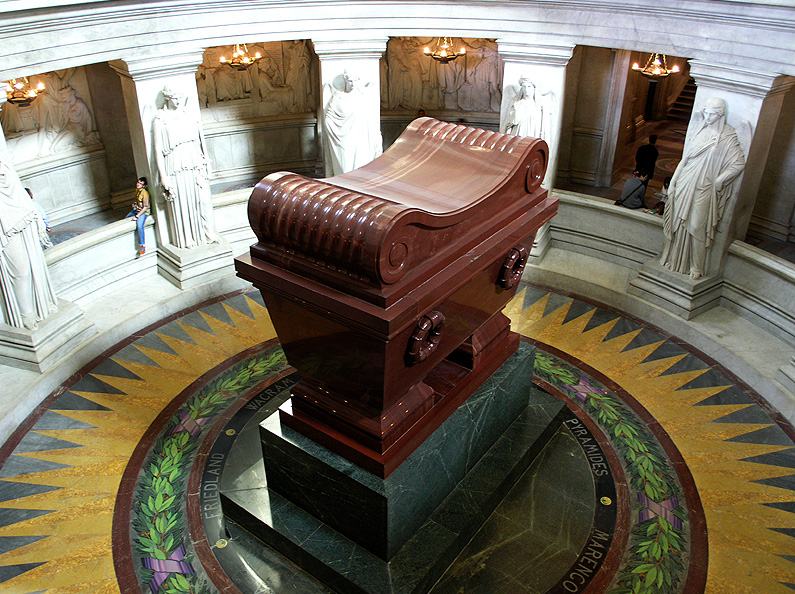 I walk back to Les Invalides. This is my kind of place, with its comprehensive military museum, dating back to antiquity and originally used as a hospital for war veterans. I am fascinated by the collection of items recalling France’s victories and defeats. As a student of French history, the Napoleonic era still holds me. I spend hours examining the flags, uniforms, models and medals. There is also Napoleon’s death mask, which should be seen. But I head for the Dome Church and Napoleon’s tomb. It is impressive to see what was done with his remains almost twenty years after his death. The crypt is encased in six coffins within a red sarcophagus on a green granite pedestal. Here too are the remains of Napoleon’s son and two brothers. Years later, in 1929, they were joined by Marshal Foch, a master of army techniques.

I walk through the gardens and around the buildings, admiring the bronze 17th and 18th century cannons and the statue of the Little Corporal, whose final wish was to “rest on the banks of the Seine”. This is an incredible array of buildings with a wonderful history. The dome, with its cupola, has been shinning in the sun since 1715. It is totally impressive. The complex was commissioned by Louis XIV in 1671 and once housed 6000 soldiers. Today there are less than 100. If you want military architectural and historical splendor, head for Les Invalides. It’s a gem. 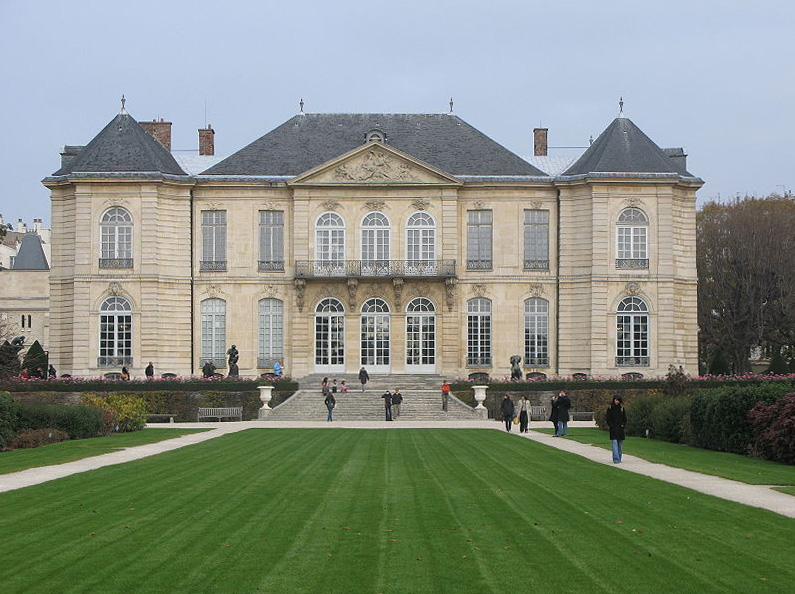 Not far away, at 77, rue de Varenne is the Hotel Biron, where Auguste Rodin once lived. This 18th century mansion and gardens now boast some exquisite works by the master sculptor. You can wander slowly through the building or among the statues in the garden. Here you will see The Burghers of Calais, The Thinker and, of course, the statue of Balzac. But standing in front of his Gates of Hell or next to The Kiss gives one a special feeling. At 5:45pm, the staff asks everyone to leave. I did reluctantly but I’ve been back since.

Continue along to 57, rue de Varenne and past the beautiful Hotel Matignon. Tallyrand once lived here and, since 1958, it’s been the official residence of the French Prime Minister. From here it’s a short walk to the National Assembly along beautiful, fashionable streets of this elegant quarter.

On Quai Anatole France, I spot the Museum of the Legion of Honneur and, next door, the great Museum d’Orsay, which rose from the old train station that had not operated for 47 years. It faced demolition in 1970, but was converted, redesigned, and ended up with one of the most exciting collections of art in the world. 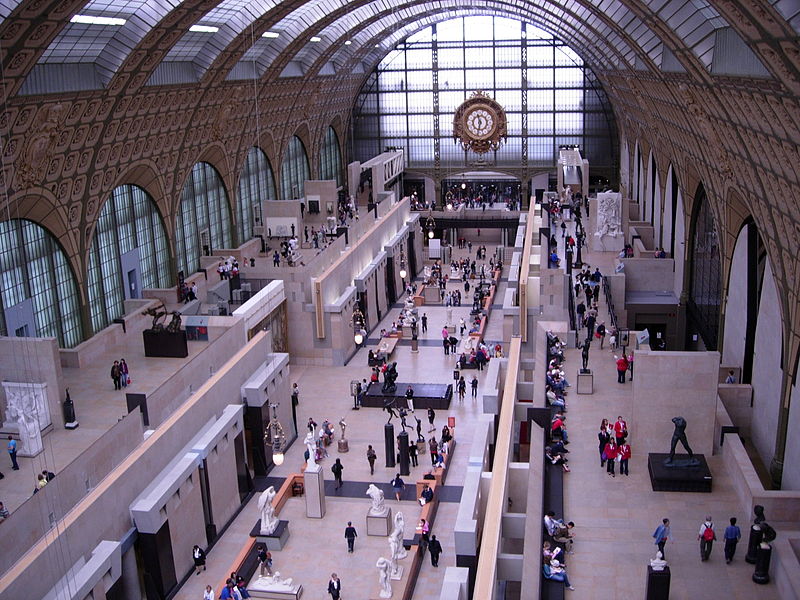 Much of the older art in Paris is at the Louvre and modern art galleries abound. The d’Orsay houses art from 1848-1914. Many of the paintings came from the much smaller Jeu de Paume, but other works were added by a committee of experts. It includes the decorative arts, some furniture and sculpture, and also houses a great collection of Impressionist art including works by Van Gogh, Cezanne, Renoir, Delacroix, Ingres, Degas, Lautrec, Manet, Monet, Daumier, Rousseau and Gauguin. The list of great artists is too long to include. The works are well lit and the reconstruction with the original aura lends itself to viewing in a modern setting. I find it pleasing and full of wonders. There are a number of restaurants for different budgets, and a great souvenir and bookstore.

Just off the small restaurant near the Impressionist collection where the clock facing the Seine is part of the décor, is a balcony. Here you can have a sandwich and drink while you relax. The view of the Right Bank highlights and Sacré-Coeur in the distance is a photographer’s paradise.

When I leave the building I try to visualize how it looked when trains ran through the building. Guidebook pictures help but the modernity and grandeur of this great museum still make me wonder. The entrance changes with construction changes but you’ll find it; probably at 1, rue de Bellechasse. Groups enter on the inner side on fashionable rue de Lille.

The 7th is not known for its shopping, but my wife found a nice selection of perfumes at Eiffel Shopping on Ave de Suffren (No. 9) and lingerie at Reve de Soie, 2, rue Cher. I did find a reasonably priced restaurant at 3 Pl de Breteuil. Le Bistrot de Breteuil has a nice terrace and excellent salmon. Just walk due south from the main entrance of Les Invalides. But if money is no issue, head for L’arpege at 84, rue de Varenne near the Rodin museum. This is a high-end, lobster and duck restaurant with a special tarte tatin (apple tart) dessert. L’arpege is closed on Saturdays. Call ahead for a reservation at 01 4705 0906.

Arnie Greenberg is a retired professor and freelance writer. He taught in Montreal area schools for 37 years, 25 at Vanier College. His specialty is modern France with a special emphasis on Paris in the 1920s.