Cecilia Woloch is an award-winning poet, teacher, and traveler. Her home base is in Los Angeles, but she spends much of her time traveling between her other home bases—in Kentucky, Georgia, the Carpathian Mountains, and Paris. She will be back in Paris in June, teaching a cross-genre writing workshop in the Marais, and doing a reading from the new, updated edition of her book, Tsigan: The Gypsy Poem, which was first published in 2002, and which was followed by multimedia performances of the work in the U.S., France, and Poland. The new edition of Tsigan, published by Two Sylvias Press, has been widely praised. On June 19 at 9 pm there will be a bilingual reading from the poem (in English and French) upstairs at Cafe de la Mairie in the Marais (on the corner of rue des Archives, and rue de la Bretagne). There may also be musical accompaniment. (“It’s my idea that Tsigan should always be presented with music, if I can make that happen,” Cecilia says.) 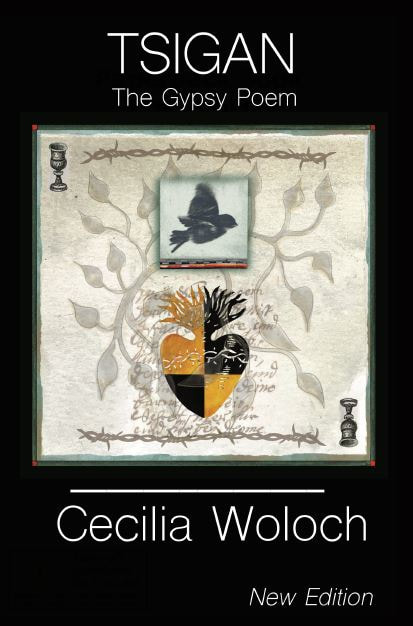 I first met Cecilia Woloch a few years ago, when I interviewed her for Bonjour Paris on the occasion of the publication of her autobiographical novel, Sur la Route.

That is also when I became aware of her book-length poetic meditation on the Roma people, Tsigan: The Gypsy Poem. But I didn’t read it until I was searching for something I could have my students read that would counterbalance the warnings they were hearing about gypsies in Paris, and their pick-pocketing ways. I knew the story was more complicated than what they were hearing (it always is), and I was in search of something I could share with them that would give them a deeper, more complex, and more sympathetic understanding of gypsy life, culture, and people.

But it wasn’t easy to find anything that was short, succinct, and positive. When I mentioned this to a friend she said, “You really should talk to Cecilia Woloch about this,” and that is when I remembered the book sitting on my shelf. I took it down, read it, and was blown away.

Tsigan: The Gypsy Poem is an incredibly beautiful work of art—spare, powerful, hard-hitting, intensely felt, and very informative. One feature of the book I love is that interspersed between the poems and poetic vignettes, there is a chronology of gypsy history that begins in 1192 (“Battle of Terain. Last Roma leave India for the West”) and ends with a statement by Roman Kwiatkowski, Chairman of the Roma People Association in Poland, given at a memorial event held in 2017 at Auschwitz-Birkenau.

Tsigan: The Gypsy Poem is a sobering, even sickening, account of a people consistently rejected, harassed, never welcome wherever they were. It is also a poignant collection of meditations, memories, and observations: some of them are highly personal, and draw on the poet’s family’s gypsy heritage. Others are peeks into her own process of discovery about the Roma people:

‘I wander through Paris reading a book called Bury Me Standing wherever I go. I read in the metro, in cafés, in the beautiful palace gardens drenched in wind and winter sun. I sit in the Tuileries filling my head (as my mother would say) with the stories and facts. Gypsies traded as slaves in Romania hundreds of years ago. Gypsies burned out of their camps all over Eastern Europe now…”Not so much nomadic by nature as that they were never allowed to stay.” I look up from these words at the Eiffel Tower, think: We have no monuments…’

In an afterword to the new edition, Woloch explains her reasons for wanting to update the work. One of them, sadly, is that while the 2002 edition ended “on a high note,” recent events, and the current political/social climate suggest that the struggle for acceptance of the Roma people is hardly over.

The Author’s Note ends with a compelling question I think is well worth all of us considering, and taking to heart. I believe it has implications for not only the Roma, but for all humanity.

‘That part of our nature…that doesn’t fit neatly between any borders…seems to inspire fear and hatred in those who seek a sense of security through order, conformity and control. What I’d like to ask through my poem is what we risk destroying in ourselves if we seek to destroy that part of our nature, our creativity and passion, our very souls? What do we risk destroying in ourselves when we try to destroy, literally, that metaphorical, that imaginary “other?”’

Celilia’s book is available on Amazon below:

Rosecrans Baldwin, I Love You, But Your Book is not Really...