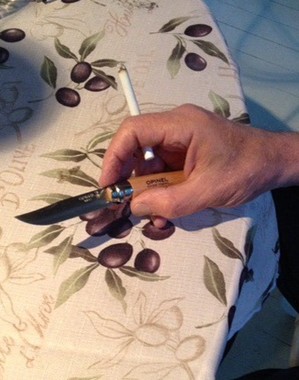 I saw him over her shoulder and must have looked startled because she looked at me, stopped eating and asked what’s the matter. She didn’t even turn around when I told her what had stopped me mid-fork and only said, Oh, un Opinel, then went back to her lunch. Another reminder that I need to get out of Paris more often.

It didn’t startle me, though I did wrinkle my nose, when a woman changed her baby boy’s diaper two seats away from me on Ligne 9 of the Métro or when a man on a swank street in Boulogne turned his back and peed in the bushes, but needs must when the urban devil drives— or rather when the bowel and the bladder are driving the trolley. I’m not used to country matters is all I can say, so the young man, no more than thirty and in the company of wife and child, spearing his charcuterie with a pocket knife made me stop and put my fork down. What could I say? Come on, pal, the ham and salami you’re stabbing are just little biddy pieces of meat on a plate—the goddam pig is dead, you know, he can’t bite you, can’t juke and jive and run for cover. Use a fork or just your fingers.

The friend in Paris I mentioned this to a few days later just grinned and told me about his great-uncle, un paysan normand, who ate all his meals with, and only with, his Opinel and who also had bushes of hair growing out of his ears and his nostrils as big as beards. He admired both, the pocketknife and the hair, with equal awe as a little boy. Still does, I think, by the goony nostalgia he has in his eyes while telling me the tale. But that was then, years ago, and in the deep country, the French puckerbrush—à Pétaouchnok—not here, not on the terrace of a restaurant across from the cathedral in Rouen. The guy with the knife has a beard, very neat and no bushes sprouting from his nose or ears, but still ought by rights to be a little background image in a Breughel or maybe front and center in one of Jan Steen’s peasant drinking brawls or a woodcut in an illustrated edition of Rabelais… in German. Not now and not here.

But here isn’t much when you get right down to the street level. Rouen is a chill and sad city.  Other than the shell of a bombed-out church—Notre-Dame des Décombres?—there’s little to see and it’s best to see that little in the rearview. Opinel-man, now, he’s actually interesting: he did stop me cold and make me put my fork down. He gives me something to think about, to consider… he gives me possibilities, even if he has never thought of them himself. 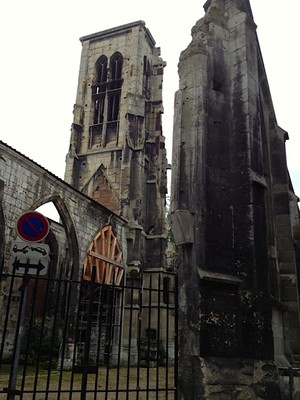 And of course I have one already, said it to myself, if not quite out loud, but missed my own point. Why doesn’t—need a good prénom normand here—why doesn’t Fraunçouès or could he be Jâoséphin or maybe Wandrille use the knife on the table? It’s included in the price, along with the paper napkin that’s guaranteed not to stay on his lap. It’s not sharp enough, he tells me, and the handle isn’t balanced very well, doesn’t feel right. All right, so you use your Opinel, but why not also the fork, included like the tip and the value-added tax? He looks away a moment and reminds me that the fork arrived in Europe around 1100, at the earliest—the debate still rages— but only at the dinner tables of the rich. To peasant families, like my own, he says, this was simply a distinction the rich wanted—positional goods, as I think they were first identified by Herbert Spencer or perhaps it was Max Weber—to keep us at arms’ length. Like buttons on their codpieces, you see? Both beyond our means… and dexterity.

That was a while ago, Fraunçouès. We’re talking centuries, not last year or just before the world war. A lot has happened since then…the gabelle is history too. Norman peasants aren’t living in thatched cottages or going barefoot, and they all have TVs and e-mail accounts…

…and forks in our houses, monsieur, yes, but it’s the women who like them and, if it suits them, I have no criticism to make, none whatsoever. But you must understand something. We eat what we eat because it’s available—we can grow it, hunt it, buy it in the market or the restaurant, depending. Granted, understood. It is a question of necessity, nothing more. Surely you know that Boas,Lévi-Strauss, Ruth Benedict, Sidney Mintz and, in his own way, Vercors have all explored the question, not that you couldn’t figure it out for yourself. But, he continues, we eat how we eat by choice. To people like me, the fork is a cultural residue of the oppression of my ancestors. It still continues, not by les grands seigneurs, but by other forces… it’s still the rich and if it’s not la corvée, it’s low wages. Ah, you’re thinking pure Rousseau, are you not? Of course, Rousseau lives, even if Unesco calls people like me culture-bearers, not revolutionaries, though some prefer tradition-bearers. Tradition, not a grudge, you understand. Would you be surprised to know, monsieur, that Hollande got sixty percent of the vote last year in Normandy even though he’s from this part of France and known to be an idiot? You should not be. He calls himself a socialist. He’s not, of course, but his party does have a long memory. We have long memories here, the men anyway, and the men still choose to eat with their knives. 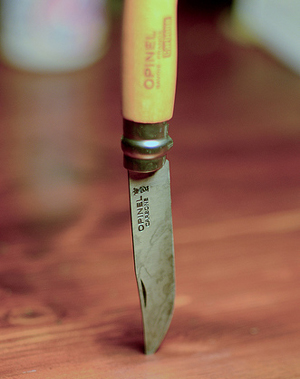 I want to ask him more, but he’s done. He has paid his check, and now wipes the blade of his knife on the napkin which never left the table, folds it and stuffs it into the right-hand pocket of his jacket. He pays me no mind as he walks off hand in hand with his wife, his son trailing in their wake. No chance to ask, Why not just eat with your fingers? No chance to say, You kidding me — Boas, Max Weber, Unesco? Come on, we’re talking table manners! No chance to tell him, I don’t believe a word of it, not one word, pal. Gone…

She looks at me, a little puzzled, asks where I’ve been the last few minutes, offers a penny for my thoughts. Not worth the price, I tell her. I know that, she says, and asks me for a centime. I pay up, the check too. In the next street on the way to the car she steers me into a hardware store and buys me an Opinel.