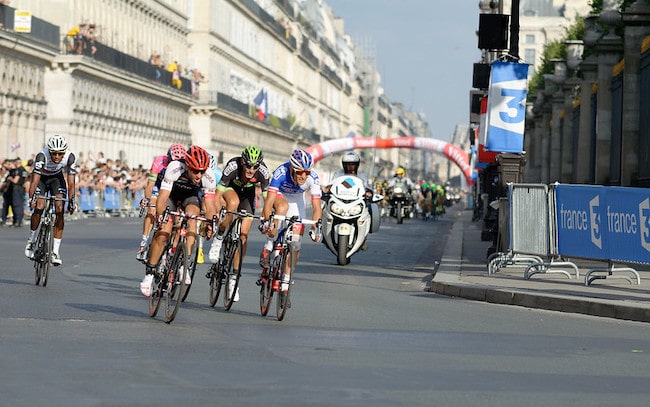 “It’s team, team, team, get up, see the doctor, have breakfast, ride the race, get a massage, physio and sleep. Then repeat.” –Egan Bernal, 2019 winner of the Tour de France

Following delays due to the pandemic, the 107th edition of the Tour de France begins on August 29th in Nice and finishes on September 20th in Paris. The race will cover 3,470 kilometers.

The 22 teams of 8 riders – with 25-30 people in the bubble – take off for a 156km road stage Saturday, August 29th, followed by a grueling 190km road stage on Sunday. The longest stage (the 12th) runs from Chauvigny-Sarran – Correze while the shortest (122km) is from Mantes-la-Jolie to Paris and the Arc de Triomphe – the winner takes home €500,000 (champagne is the usual bevy to celebrate the finish).

This year the Amaury Sport Organisation (ASO, the organizers) have routed the race through five mountain ranges: Alps, Massif Central, Pyrenees, Jura and the Vosges. It will be an unconventional and mountainous route taking in 29 categorized climbs and five mountain finishes.

There will be no finishes on iconic ascents such as L’Alpe d’Huez and Mount Ventoux. The stand-out mountain finishes in this edition will be on the ascents of the Puy Mary in Massif Central – stage 13 – and Col de la Loze, Méribel, in the Alps – stage 17. Look out for the introduction of four new climbs: Col de la Lusette and Suc au May in the Massif Central, Col de la Hourcère in the Pyrenees and the summit of Col de la Loze.

There’s no team time trial in this year’s edition of the race, just one 36km individual time trial between Lure and La Planche des Belles Filles on stage 20.

Although the route is designed for the best climbers in the world to contest the overall title, there will be stages that favor the sprinters, too. Flat parcours are scheduled on stage 1 and 3 in Nice, stage 5 in Privas, stage 7 in Lavaur, stage 10 in Ile-de-Ré/ Saint-Martin-de-Ré, stage 11 in Poitiers, stage 14 in Lyon, stage 19 in Champagnole and the awesome stage 21 finale in Paris.

So champion Egan Bernal (at age 23, the youngest TDF champ for more than 100 years) from Bogota, Colombia, is heading the Ineos squad, alongside the Ecuadorian Richard Carapaz. And an injured Mark Cavendish misses the Tour for a second consecutive year – left out of the Bahrain-McClaren’s eight man squad.

Matt White, team director of Mitchelton-Scott, the Australian based World Tour cycling team, told The Guardian: “This year has not been a normal one by any stretch of the imagination but the team is focused and ready for the challenge. We are very happy with the mix of experience and talent we have available for this year’s race … this is a very complete group across all terrains.” Teams will be withdrawn from the Tour if two riders or staff show symptoms or test positive for Covid-19, under strict protocols from race organizers.

Tour director Christian Prudhomme, calling for spectators to mask up, updates the safety measures likely to be in place for fans and the peloton. In an interview with Spanish newspaper El Periodico, Prudhomme observed: “There will surely be no kisses or hugs during official ceremonies. And one might think that it is certainly not the best year to collect autographs! The public may come to the Tour but there will be a filter. In the mountains, we will favor those who climb on foot, by bicycle, or in the transport established by local communities. But, I repeat the situation can change from day to day”, he adds.

“Everyone on the race will have to respect strict medical protocols to limit the risk of the COVID-19 virus emerging in the peloton and possibly stopping the whole race, but there is a real sense that the riders will race as if there’s no tomorrow”, says Cycling News. “If the race manages to reach Paris with a limited number of cases in the ‘race bubble’, the sport will have pulled off a high-stakes, calculated gamble. If something happens along the route and the race has to be canceled, the damage to the sport could be irreparable”, they add.

Watch the Tour live on Eurosport and the Eurosport app from August 29th.

And, whomever you’re rooting for, put on the yellow jersey, sit back and enjoy the magnificent panorama of La Belle France unfold!

⚠ So that the #TDF2020 goes smoothly, adopt good behaviours and respect the guidelines and rules throughout the entire race.

Previous Article Louisa Seifert: Poetry in a Time of Dislocation
Next Article Hidden in Plain Sight: Treasures of the Third Arrondissement