Paris is a city of impressive architecture and edifices, packed with sites and people worth ogling. While the city’s monuments and museums draw crowds of tourists every year, oftentimes visitors find that the true charm of Paris is found in its hidden treasures: a charming cobblestone street, a secluded terrasse off the beaten path, a cozy neighborhood café filled with locals. Among these gems scattered across the city are the hidden gardens of Paris. Unlike the city’s official parks and gardens, these bursts of green are less frequented and often left to grow wild, making for an enchanting departure from the order and din of the capital. Here are a few hidden gardens to explore while in Paris.

Arguably less hidden since La Recyclerie [2] set up a massive terrasse on the opposite side of the railroad tracks, this community garden in the 18th maintains its secretive status as its entrance is not immediately obvious. Located on the platform of the abandoned railroad tracks circling Paris, Les Jardins du Ruisseau is open to the public on the weekends and a handful of days throughout the year. Raised bed gardens are filled with cherry tomatoes, zucchini, and bursts of fresh herbs during the summer months. The gardens are also home to beehives that produce award-winning honey and a chicken pen with some of the city’s most fabulous urban hens. Scattered picnic tables make a great spot to stop and enjoy some calm and greenery in the middle of the city. For more information, visit the website here.  [3]

Hidden smack dab in the center of Paris, the garden next to the city’s town hall was closed to the public until January 2015, when Paris mayor Anne Hidalgo decided to open its doors to Parisians. [5] During the week, the garden is closed and used as a playground for the daycare that welcomes city employees, but during the week and holidays, visitors can tour this up-until-recently secret garden, which will soon be home to a henhouse of its own.

Escape the commotion of Parc de la Villette (19th arrondissement), and take a small hidden path through an overgrowth of bamboo and you’ll find Les Jardins Passagers. Open to the public from late May to mid September, the garden welcomes visitors on weekends between 3-7 p.m. Volunteers are happy to take you on a tour of the prairie-style garden or you can enjoy the space on your own, stopping to read informative plaques that present the indigenous species and explain the role urban gardens in the creating biodiversity in cities. For more information, check out the website here. [6] 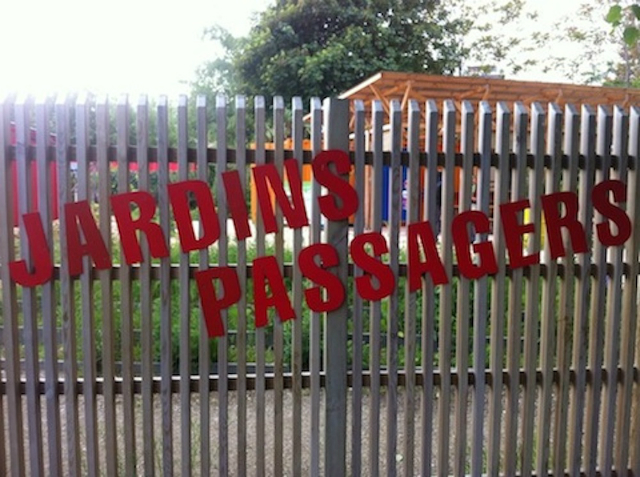 In the shadow of Sacré-Cœur and just down the street from Montmarte’s famous vineyard, you’ll find the Jardin Sauvage Saint Vincent (17 rue Saint-Vincent). This abandoned lot-turned-garden has been reclaiming space for the past 50 years. Wild flowers and plants are prolific in this tiny garden that teems with life. Spot frogs and other critters that are drawn to an emerald green pond in the center of the garden. A great spot for kids, and adults, in need of the freedom of untamed space. Accessible only on free guided visits; for more information, send an email: [email protected] [8]
meslieux.paris.fr [9]

Quaint footbridges, rock formations, waterfalls, and water features are just a few of the things that await you at the Jardin de la Nouvelle-France, formerly known as the Jardin de la Vallée Suisse. An oasis located a stone’s throw from the hectic Champs Elysées [11], this garden dates back to the late 19th century. Various tree species and other flora engulf this surprising space that transports you to a charming Swiss Valley. Location: The intersection of avenue Franklin-D.-Roosevelt and du cours la Reine, on la place du Canada in the 8th.