Vernon, France – Not Just a Way Into Giverny 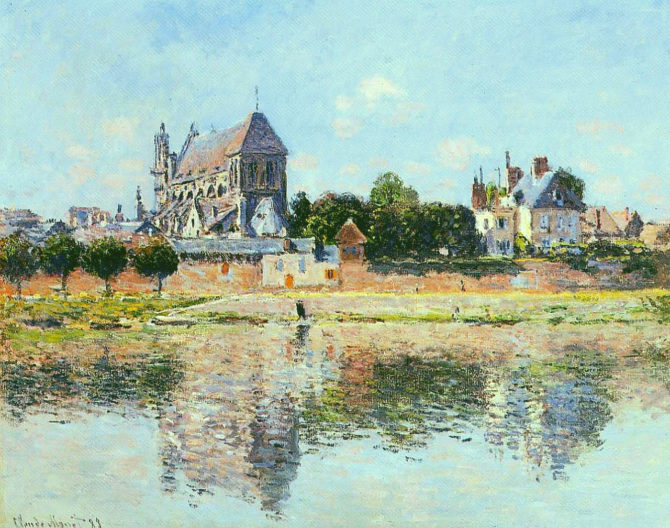 I revisited Giverny via the usual train from Paris’ Gare St Lazare to Vernon, and discovered that Claude Monet and the town of Giverny are not the only wonders at the end of the tracks, but that the town of Vernon itself is also worth the trip.

I knew that while spending my 70th birthday month in France I would read and write and be a flaneur in Paris; I would have the time to find and savor new people and places and experiences; and that I would also spend time with old friends and revisit familiar loved places –  but sometimes with a different point of view.

Claude Monet has long felt like an old friend, from the first time I found him in France – in his masterpieces at the Musee Marmottan (near the Bois de Bologna) where his family donated much of his work after his death and his photo was  prominently placed on a wall as if he were greeting me, in the two oval rooms at L’Orangerie museum (at the west end of the Tuileries) where his permanently installed wall sized pieces surrounded me in the colors and light and natural beauty of the Giverny lily ponds, and also – most clearly – in the wonder of the house and gardens in that beautiful country town.  I sometimes feel that his soul resides in his sumptuous gardens or somewhere near that green bridge in Giverny where he was so often photographed walking with his good friend Prime Minister George Clemenceau. 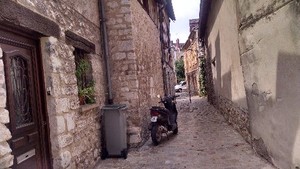 What I never knew before is that he and his influence are also represented by works on the walls of the Musee Vernon – just a few blocks from the train station – along with other Giverny impressionists including Pierre Bonnard, Edouard Vuillard, Mary McMonnies, Blanche Hoschede’-Monet (daughter of Monet’s second wife Alice) and Giverny Americans Theodore Earl Butler and Frederick Richardson. I also never knew that the town of Vernon had a church dating back to Roman times, restored 15th century half timbered houses, narrow streets saved from the WWII bombings – some unchanged since the middle ages;  a beautiful swath of the Seine; remnants of old town ramparts; and a tower dating back to the 12th century. 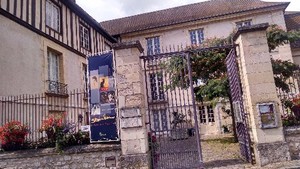 As always, I purchased a ticket from Paris to the town of Vernon, leaving from Gare St Lazare, and about an hour later arrived at the Gare Vernon where I found a navette to take me to Giverny. Sometimes, I have taken a taxi – sometimes walked the 45 minutes along country paths to make my way to Monsieur Monet’s gardens, but never ever before have I remained in Vernon longer than the time necessary to decide and implement transport to Giverny, or to have a drink while waiting a few minutes for the return train.

This time, I picked up a pamphlet in the train station and by the time I descended from the Giverny bound Navette 20 minutes later had to my surprise learned that Vernon is much more than a jumping off point. Five hours later – still three hours before my return train –after visiting the house and gardens, walking the rues of Giverny, perusing some galleries, and having a wonderful lunch in the historic Ancien Hotel Baudy (which housed many of the Giverny impressionists who flocked there to follow Monet’s lead and where Monet and his other impressionist friends would meet) – I returned to Vernon to finally discover that lovely little town sitting on a beautiful wide and wooded part of the Seine,  which I read is sometimes called “l’entrée de la Normandie”. 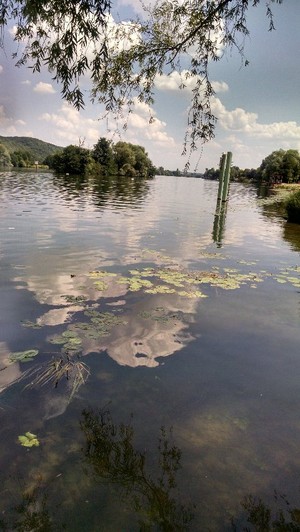 I stood on the shores of the Seine and savored the beauty of the flowing water, the woods on the other side, and the boats floating by. Then, I walked to L’Office de Tourisme de Vernon, on the first floor of a 15th century half timbered house called “Temps Jadis” (“house of past times”) and picked up a walking tour of Vieux Vernon (starting nearby), a pamphlet with information about the grand historic church across the street known as “La Collegiale Notre Dame”, and information about the Musee Vernon (known as the Musee A. G. Poulain), La Tour des Archives, and the town itself.

I started by walking along the ancient medieval rues, and walked by the ancient ramparts of the city, along the banks of the river, by the remnants of a medieval bridge leading to a nearby island thick with vegetation, by old inns, the Tour d”Archives, ancient cobblestoned streets – including the tiny ruelle Malot (virtually unchanged since the middle ages) and finally back to the Temps Jadis and the Collegiale.

I found that the 15th century two storied corbelled Temps Jadis is the oldest house in Vernon, has been restored to its 18th century atmosphere, and features a carved representation of the Annunciation on the first floor corner post.

I visited the grand old church known as the Collegiale – a huge imposing structure dedicated in 1099, used in 1160 as the home for a College for 12 canons to serve the church (hence its name), with major alterations in the 13th and 14th centuries and its last major construction in the 17th century (including raising the nave floor due to flooding). It was transformed for a time during the Revolution into the “Temple of Reason” to save it from destruction. 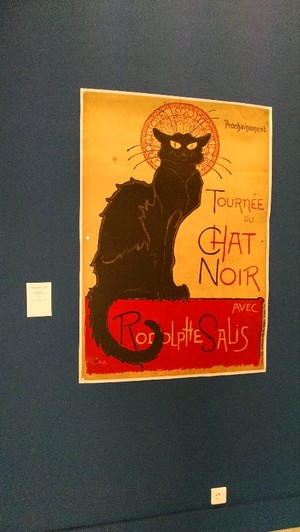 I visited the Musee Vernon, just a few blocks away – housed in a combination of a 16th century half timbered house with a stone wing and other structures added in the 17th and 18th centuries. and saw not only the Monets and other Giverny impressionists on the floor devoted entirely to them (including a Nympheas by Monet, a haystack by his stepdaughter, and works of Mary MacMonnies and other of the Giverny artists), but also the animal art on the top floor, and the print room on the first floor currently devoted (until September 21) to much of the Musee’s large collection of  poster art and illustrations of the famous Montmarte artist Steinlein – including the well known poster for Le Chat Noir and illustrations for works of Zola and others – in commemoration of the 50th anniversary of the 1964 donation of the works.

I didn’t have time to visit the Archives Tower (which was a 12th century defensive tower, draws its name from the records kept there later by the Comte d’Eu, Lord of Vernon, and I understand affords the visitor a spectacular view of the Seine Valley).  I also understand that there are two beautiful chateaus nearby to visit.

It is clear that I will have to return another time – not only to the environs of my old friend Claude Monet but also to the nearby town of Vernon which was the gateway to Normandie and is the entry point to any visit by train to Giverny. Trains leave the Gare St Lazare – still reminiscent of the famous Monet painting – a number of times each day for the under one hour trip.

Maison et Jardins de Claude Monet: open from 9:30 to 6:00 from April 1 – November 1 (tel. 02-32-51-28-21) Navettes from Vernon leave and return throughout the day, matching generally the train arrivals and departures- cost 4 euros each way.

Previous Article Photo of the Week – August 8, 2014
Next Article Maestro : Be Careful Of What You Don’t Wish For