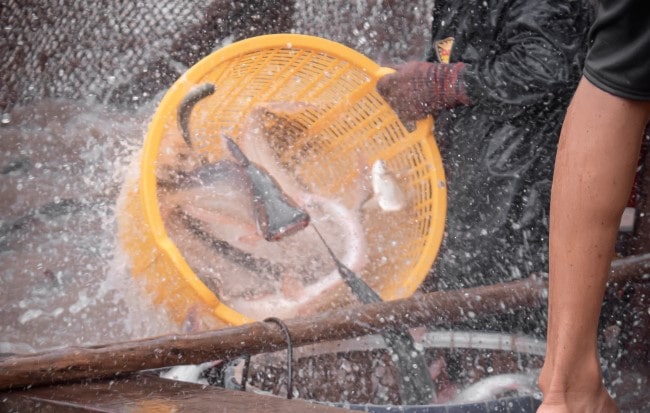 A fisherman in Paris recently caught a gigantic catfish weighing nearly 50 kilograms and measuring two meters in length. Cyril Bisson pulled this sea monster from the Canal de l’Ourcq, before releasing it back into the water. (The canal is a “no kill” fish zone.) A reportage in Actu News provides the details: “ ‘The catfish is a nice fish’, assures the enthusiast who has made it his mission to rehabilitate it.” According to Bisson, the catfish plays the important role of canal scavenger, eating carrion, sick animals, even pasta pasta bolognese and slices of pizza ditched by canalside revelers. (It’s also a predator for pigeons and ducks.) Check out the video below when the fisherman snagged the fish.

Have you been watching the Winter Olympics? Or still playing reruns of the Super Bowl commercials? In case you missed it, French ice-skating duo Gabriella Papadakis and Guillaume Cizeron won gold in ice dance on Valentine’s Day and their performance was flawless. For a little grace and inspiration, check out the video below:

With just a few months before the French Presidential election, the conservative candidate Valérie Pécresse held an event this past Sunday, “what rivals and campaign insiders touted as a make-or-break campaign rally on Sunday afternoon,” explains France 24, “following a string of defections to Emmanuel Macron’s camp, alongside criticism from her party’s influential ex-boss, former president Nicolas Sarkozy.” President Macron still hasn’t declared his candidacy. Yet, as reported by Euronews, “he has a full campaign team that’s fanning out around France, meeting with voters, and he is making speeches about his plans for the country in the upcoming years… He said last month that he has “the desire” to run for a second term, but he wanted to wait for the COVID-19 situation to improve before making a decision. The deadline to formally declare candidacy is 4 March, while the first round of elections is scheduled for 10 April.”

An incredible archeological find in a cave in southern France — the earliest evidence of modern humans in Europe — has shown that modern humans lived alongside Neanderthals. To quote NBC News: “The findings at Grotte Mandrin, a cave in the Rhône Valley about 80 miles north of Marseille, focus on a single Homo sapiens tooth and on distinctive fragments of flint points that are thought to be for the arrows and darts used for hunting by early modern humans. The discoveries push back the earliest date of our species — Homo sapiens — in Europe by roughly 10,000 years, to about 54,000 years ago, according to a study on the findings published Wednesday in the journal Science Advances.”

Fully vaccinated travelers will no longer be required to undergo Covid tests in order to enter France, which should see an increase in travel bookings particularly during the busy half-term holidays when many Britons book ski holidays in the Alps. (Children under 12 are exempt from testing and vaccination requirements.)

France has announced a major plan to build up to 14 new nuclear reactors by 2050. As reported by The New York Times, “President Emmanuel Macron outlined plans for a wave of new-generation atomic reactors as the country seeks to slash planet-warming emissions” and cut its reliance on foreign energy. ‘‘What our country needs is the rebirth of France’s nuclear industry,” Mr. Macron said at a nuclear turbine factory in the industrial city of Belfort in eastern France as throngs of workers and political officials gathered around. ‘The time has come for a nuclear renaissance,’ he added.”

Inspired by Ottawa protests, a “Freedom convoy” opposing Covid mandates headed to Paris last weekend, waving Canadian flags, though the convoy was banned from entering the capital. Over 7,000 police officers were deployed at checkpoints in order to stop vehicles from entering the city and to break up potential blockades. Hundreds of vehicles managed to evade these checkpoints and those who blocked traffic on the Champs-Élysées were met with tear gas. There were also peaceful protests in central Paris against the vaccine pass.