A Tribute to Candice Stevens 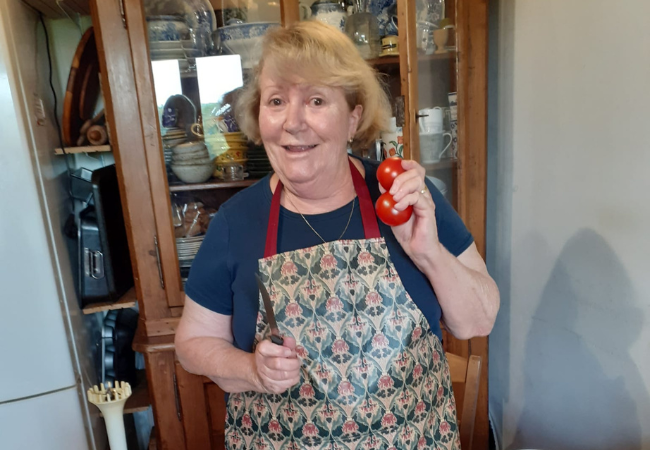 For some years now, our dear friend Candice Stevens has been regaling Bonjour Paris readers with culinary tales from the Paris Cook Club. She recounted our adventures and misadventures, undertaken in tiny Parisian kitchens, in holiday homes in Normandy and Provence, or wider afield in Portugal, Italy, Spain and Ireland.

Candy was a founder member of the Paris Cook Club and one of its most stalwart members, as well as the club’s record keeper. She drew on those carefully kept records, deep knowledge of all things culinary and her previously hidden talent as a writer (a career writing economic reports for the OECD doesn’t count!) to produce a series of posts which were widely read and enjoyed by the Bonjour Paris community. She astonished us all with her ability to weave such enjoyable and informative narratives.

An interest in cooking is not enough to be a member of a Cook Club such as ours. You also need to be well-organized, a team player and adventurous. You have to keep your ego in your pocket when you turn up to cook an elaborate meal in someone else’s kitchen, which may only measure a few square meters – as does mine. That is one of the wonderful things about the Paris Cook Club – everyone’s ability to stop being the boss and become a member of the team, to put aside their likes and dislikes, wait your turn and never say that you cannot or will not eat “that”. Candy had all those qualities and thrived in the environment, always calm and always ready to defuse a row with a mischievous remark and a laugh.

The Cook Club was not the only outlet for Candy’s love of cooking. From the kitchen of a beautiful Normandy longère in a picturesque village perched high above a sweeping bend in the Seine, she welcomed friends and neighbors with wondrous meals. She loved to cook for others: village events, cook-outs, Thanksgiving, gatherings of the Normandy branch of Democrats abroad. It was how she expressed herself and she made it all look deceptively easy.

Over the years the Cook Club has gone from the modest ambition of reproducing Jamie Oliver 30-minute meals to producing elaborate repasts requiring technical skill and precision timing. In July we cooked “Greek”: dolmades, spanakopita, briami, and Greek orange cake. Most recently we met in Lucca in Italy, but sadly without Candy (and Dave, her writer husband). We made vincisgrassi, a delicious mushroom lasagne, mainly with porcini mushrooms which were in season and affordable, pork loin chops filled with spinach and ricotta and cooked alongside cinnamon roasted apples, and a delicious panna cotta infused with basil. And, of course, we raised a glass to Candy.

Back in Paris, reunited with some of our U.S.-based members, we remembered her again, celebrating her life over lunch at l’Ortensia, a wonderful French-Japanese fusion restaurant in the 16th arrondissement of Paris. Candy and I had tried out l’Ortensia for the first time in July, and had the honor of meeting chef Terumitsu Saito, just a few weeks before she passed away.

The Paris Cook Club carries on, but we have lost a cherished friend and member. As we continue our culinary adventures she will be with us in spirit, resolving differences about whether it is disgraceful to use a store-bought pastry (“dough” to some of you), or raising “le verre de la consolation”, that is the consoling glass of wine that the cook is allowed to pour for herself once the work is done!

Previous Article 7 Places to Find Autumn Colors in Paris
Next Article Flâneries in Paris: Explore the Palais Royal and Environs