See the Great Art of Paris for Free 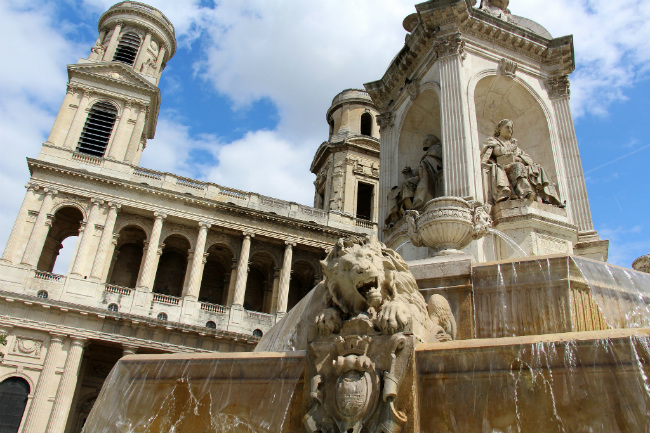 As you stroll along the cobblestones of Paris, never miss a chance to take a peek inside the inviting open doors of the many churches. For it is inside that you’ll find a treasure or two from some of the greatest masters of art, away from the crowds and for free. 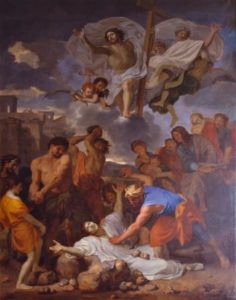 At the highly visited Notre Dame de Paris, take the time to look into each of the chapels. Tucked away in the very first chapel of Saint Éloi is a painting by Charles Le Brun, the official court painter of Louis XIV who would be instrumental in the construction of Versailles. The Stoning of Saint-Etienne and his other painting The Crucifixion of Sainte André are part of the collection called Les Mays. Between 1630-1707 the Saint Anne guild of Parisian goldsmiths commissioned paintings to be donated to the churches by some of the great 17th century French painters. While some of Les Mays have been removed and placed into museums, Notre Dame de Paris still holds most of these masterpieces that often go unnoticed.

Located in the 7th arrondissement is the Second Empire Neo-Byzantine church, St-François-Xavier. From the outside, it is not the most interesting of façades, but do not let that stop you. Inside you will lay your eyes on one of the greatest pieces by the Italian painter of the Venetian school, Jacopo Tintoretto. The Last Supper by Tintoretto was an image he painted many times, refining it along the way. Unlike the Leonard da Vinci version, Le Tintoret, as he is known in France, decided to gather the Apostles around a square table. It gives you the perspective that you are looking at them gathered from a hidden vantage point. A gift to the church in 1905, it can be seen today hanging in the wedding sacristy.

Just off Boulevard Saint Germain is the Latin Quarter church of Saint-Nicolas-du-Chardonnet and is a treasure trove of art. Charles Le Brun’s 1962 The Martyrdom of Saint John the Evangelist is striking and was a departure from the usual way the Saint was depicted. The painting shows the Saint being lifted by a rope towards the vat of boiling oil while the executioner blows on the fire below. Humanizing the Saint for the first time by showing his full body gave the painting movement and life.

You certainly cannot talk about the great art in the churches of Paris without talking about one man, Eugène Delacroix. The leader of the Romantic Movement dedicated the last years of his life painting large scale decorations for public places, as a means to live on after he was gone. 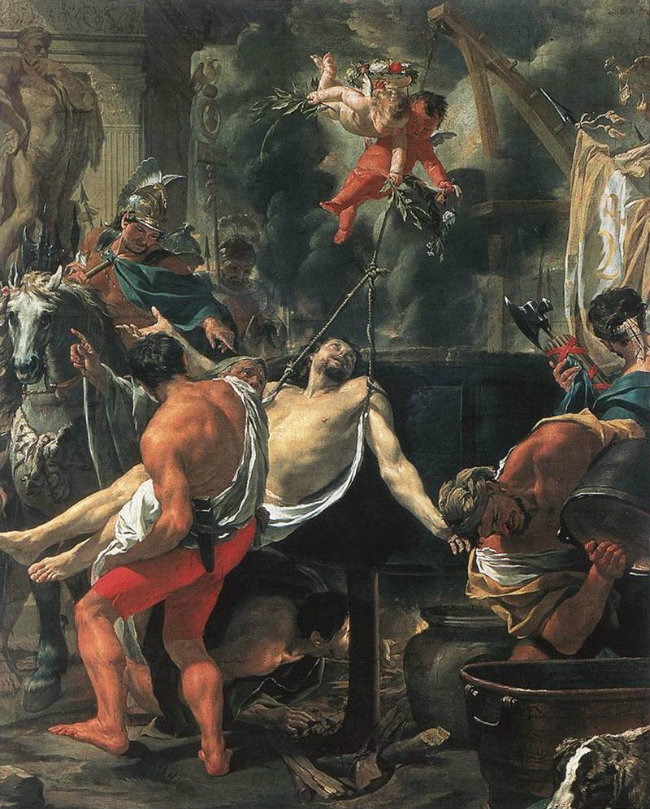 Often overlooked in the bustling Marais district is the Saint-Denys-du-Saint-Sacrement church. This was the first public commission for a religious mural for Delacroix in 1840. The familiar scene of La Pietà — depicting the body of Christ in the arms of the Virgin after he is pulled down from the cross– was painted directly onto the wall of the Sainte Geneviève chapel. Using bright colors for the figures and placing them in the foreground of the painting gives it even more depth and emotion.

Follow down Rue de Turenne for a few minutes and you will reach the gem of Rue Saint Antoine. The Italian and French Gothic church with its red doors is not to be overlooked. The inside is beautiful with its high dome, stonework, statues and chandeliers. On the left of the transept above the door is Delacroix’s Le Christ au Jardin des Oliviers, painted in 1824– a demonstration of why the artist was a master of Romanticism. It shows Christ pushing back three angels that are hanging their heads in sadness, which is a slight change from the printed word. It was thus liberal use of the biblical text and the changing of the story that Delacroix would continue in all his religious pieces. 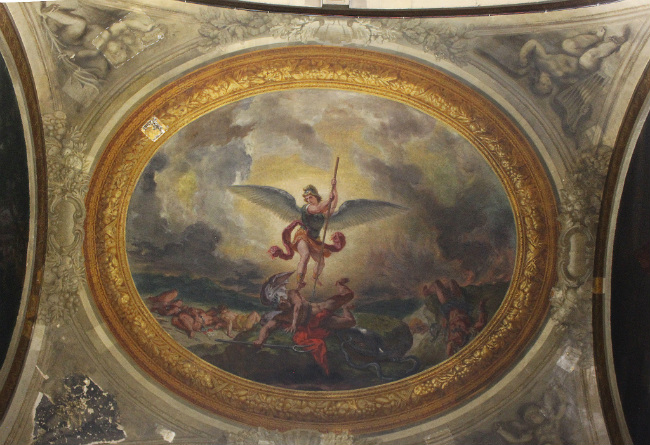 Last but not least, it is a visit to the largest church on the Left Bank, Saint-Sulpice, where we will find the finest of Delacroix’s religious paintings that remain today. Just inside the door to the right in the Chapel of the Holy Angels Delacroix was given free reign of the paintings, the only stipulation was that they referred to the subject of angels. For the two walls he chose Jacob Wrestling the Angel on the left, and on the right Heliodorus Driven from the Temple. Painted directly onto the walls with a medium mixed with wax and oil, it would take him over three years to complete. Hanging above is the beautiful Saint Michael Defeats the Devil, painted on a canvas and later secured into place. Each of these three works is filled with symbolism and even some small features that are more reminiscent of modern times than that of the biblical period. A restoration was just completed in 2017 where the layers of the years were removed so they can now be seen in all their glory.

I strongly advise a trip to see all of these and the many others in Paris. Take the time to sit and soak them in; after all you will be away from the crowds of the museums and these works can be truly enjoyed in tranquility as they should be.