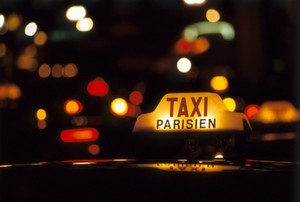 As far as I could tell, there was nothing Dutch about the Klein Holland besides the fact that it sold Grolsch by the pitcher. The music was all American pop, the clientele was mostly English, the bartender was an Aussie, and, save for the smattering of schnapps advertisements, the décor shared all of the tourisme and flash that could be found just over the river in the Latin Quarter. The two girls from Amsterdam, whom David and I had been showing around town for a week or so, were thoroughly disappointed. They’d been traveling throughout the continent for nearly a month, and at that point— with another two weeks left to go—their ears had grown thirsty for a drop of their own language. The only Dutch that I knew was “schuim”, which is the head on a beer, but no matter how loftily or regularly I praised our Grolsch for its foam, the girls’ mood resisted improvement.

Suddenly David snapped his fingers. “I’ve got it! The Tower! You girls haven’t seen the tower yet, have you? At least not at night?” They shook their heads. “It’s just a little after mid-night now, so if we hurry we can still make the one o’clock sparkle.”

For those of you who are unfamiliar with this occurrence, the Eiffel Tower has been illuminated since the turn of the millennium. The lights kick on at dusk, and then each hour on the hour, for ten minutes, the entire structure flashes and shimmers. Its final display is at one in the morning (two during the summer). It never fails to provide the romance that brings so many lovers to the City of Lights.

The girls were intrigued but hesitant, voicing a number of concerns: We’d already walked so much that day, going to the Tower would just take us further away from our neighborhood, it was a weekday and the metro stopped early, and so forth. David—a shrewd problem-solver—snapped again. A taxi! Had they ever ridden in a Parisian taxi? No, they don’t all rip you off! Well, yes, many of them do—but only if you’re not paying attention.

So it was decided. We exited the bar onto Rue de Rivoli, then walked down to the Quai de l’Hotel de Ville where it would be easier to flag down a cab. A few moments later the four of us were piled into a back seat, racing along the river. 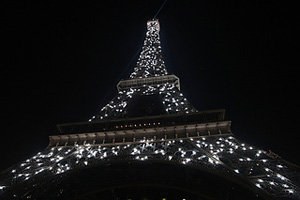 We bailed out of the cab on Quai Branly and, walking down the street with Fiona on my arm and Larissa on David’s, we all chatted and kept an eye open for one of the junk vendors who roamed the area and would almost certainly have some cheap wine. Then the Tower emerged from the skyline like some great, golden scepter that was meant to be wielded by giants or gods. I could go on describing its magnificence and will—some other time. It is not the subject of this current missive. For now, let it be sufficient to say that it was beautiful and that the lights never fail to steal away one’s breathe, especially when coupled with wine and romantic company.

By the time we stood from our grassy vantage the structure had been dark for quite a while. Most of the onlookers had already made their way out of the park, and, as the train had stopped running some time earlier, each of the cabs we spotted was occupied. David and I were all for making the long but enchanting walk back to our flat which was located where the canal intersects Rue La Fayette, but the girls protested and we ended up sitting on a curb watching the passenger-laden taxis pass. After not too long a wait, I spotted one that was vacant and flagged it down. We climbed in and gave the address to the driver—a man of maybe fifty-five whose skin color and accent indicated an African origin— and settled into our seats.

As we were all a bit worn out, our conversation was sparse. At some point, however, Fiona made some remark to Larissa in their native tongue which caused the driver to give them a smiling glance in the rearview mirror and say something that I could not understand. Both girls sat up with an excited start.

The three of them entered into an exchange which is far beyond my transalatory capacity while David and I looked on with interest. Finally the driver addressed us English speakers. “I am telling them that I very much enjoy speaking their language, and that I do not get a chance to speak it very often.”

“Did you live in the Netherlands?” David asked.

“No, I learned it driving the taxi. It and many others.”

“That’s incredible. What else do you understand?”

“Oh, German, Russian, Italian, and many others. I know twelve or thirteen languages very well and can speak reasonably well in maybe ten more.”

“That’s really amazing.” I asked, “How long have you been driving a taxi?”

“For twenty-three years. I was born in Cameroon and came to Paris to study languages at the university when I was a young man. Shortly after I returned to my country it experienced many difficulties—this was in the nineteen-eighties—so I decided to move back to Paris. I have driven ever since.”

“Why Paris?” Fiona asked in her soft, Dutch accent.

The man laughed with a high-pitched glee and clapped his hand on his knee. “Why Paris? That’s really very funny to me. I could not imagine living any other place in the world. Here, with all of the dancing at night and the old buildings and the museums filled with their paintings and of course all of the beautiful women…Here is where I belong.”

At that point I had been in Paris for three months, and I was beginning to adopt a similar disposition.  In one month I would leave for Spain and in another I would once again be back in the United States. I wondered how long it would be before I would return to that great city of stone and lights, the hub of the wheel, as it has been called. I wondered if I would even be able to bring myself to leave it in the first place? Probably I would, but that is a tale for another time. 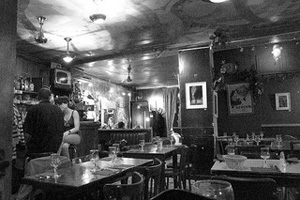 It was not long before the car pulled to a stop in front of the building where David and I were subletting a small flat. We all vacated the back seat, but not before exchanging handshakes with our hyperpolyglotistic driver, who told us that he would finish his shift at four and that if we would still be awake and were interested in a drink we should meet him at a little place that stays open late on Rue Oberkampf. It is a city where one often receives invitations to raise glasses at strange hours. We did not go to Rue Oberkampf that night, just to bed. But the four of us did seek it out in the days and nights to come, and, though we never did encounter the multi-linguist, we enjoyed many a strange sunrise within its agreeable walls. But, once again, those are stories for another time.