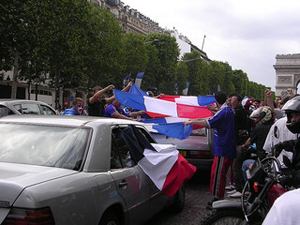 The eve of Bastille Day, July 13, is known in Paris and all over France for accordion music, dancing in the streets and brilliant firework displays. But July 13, 1998 will go down in French history as obscuring all other Bastille Day celebrations. That year, for the second time in its history, France organized the World Soccer Cup and that July 13 evening half a million fans flocked onto the Champs Elysées to cheer their French national team. With two goals by Zinedine Zidane and a third by Emmanuel Petit, les “Bleus” had just beaten Brazil (3 – 0) and won their first World Cup in the history of France.

That the French were to beat Brazil, homeland to Edison Arantes do Nascimento (better known as “Pelé”) one of the greatest soccer players of all time and the idol of most French soccer aficionados, young or old, amateur or professional, was no minor feat! That year the co presidents in charge of organizing the Cup in France were a certain Fernand Sastre and Michel Platini.

Algerian by birth, Secretary General for the FFF (Federation of French Football) from 1969 to 1972, Sastre, along with Henri Patrelle, put an end to the separation of amateur and professional football in France. Under his impetus the number of licensed players in France rose overnight from 800,000 to 1,700,000. Alas, sadly for French football, Ferdinand Sastre was to pass away, a victim of cancer, on June 13, 1998,, one month, day for day, before that famous accolade on the Champs Elysées. 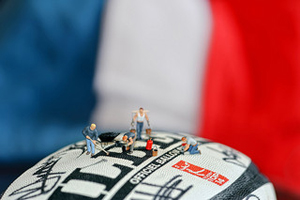 As for Michel Platini, born in France’s Alsatian region of Italian parents, Platini was the “darling” of French and Italian football fans all through the ‘60s and ‘70s. Actually Platini is better known for his career with Milan’s Juventus team (1982 – 1987) than for his performance with France’s major league teams in Nancy and St Etienne, but like Pelé or Zidane, with 356 goals in all, he is still considered to be one of the best soccer players of all time. He was recently re-elected unanimously to a second four year term as President of the UEFA, the sixty year old Union of European Soccer Teams.

Ok, let’s be honest, if our adult daughter named her dog “Chabal”, after France’s most famous rugby player, I’m much more into other French sport preferences such as tennis, cycling or world cup sailing than I am into soccer and do dressage riding personally. I did, however, teach English for several years at the local major league training center in Auxerre (l’Yonne). I had to swallow my false pride as I watched my high school students evolve to salaries far beyond what I could ever have hoped to earn after years as a public school teacher in France. Still, during that time, I also had an opportunity to work with adult coaches and get somewhat of an insider’s view of soccer ethics.

While working with the AJA, I learned about something called “Total” soccer, a tactic dreamt up by the Dutch coach Rhinus Michels in the Netherlands again during the ‘70s. In total soccer, offensive, midfield and defensive players become interchangeable. This way of taking into account a soccer field, makes for a fluidity of movement worthy of a ballet where any player, including the goal keeper, can change roles at any given moment.

Thanks to my AJA experience, I also learned why Brazil’s Pelé was an idol and a model of both moral and physical courage. Pelé “style” is a sort of moral philosophy in which the player develops his physical, technical, tactical and psychological capacities in a world of mutual respect. I also learned how unjust a game can sometimes be when a short sighted umpire doesn’t seem to notice repeated blows from other teams intent of eliminating their adversary.  Nonetheless, despite the “money rules” motto for most clubs, I can still appreciate just how beautiful a game can be when it is played “Pelé” style. 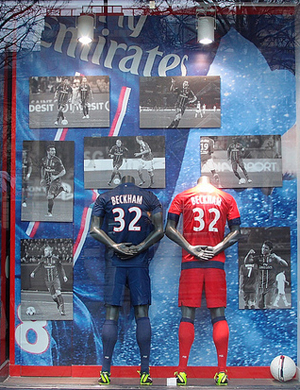 And while we’re on the subject, in case you didn’t know, if women have only had the right to vote in France since 1949, the first women’s soccer team dates back to 1919 in Reims, capital of the Champagne region. After disappearing in the 1930s, women’s leagues were once again reinstated to national level in the early ‘70s and are still going strong in 2015.

Now if that isn’t also something to pop corks over?