All those Love Locks on Paris bridges? It’s time for them to go 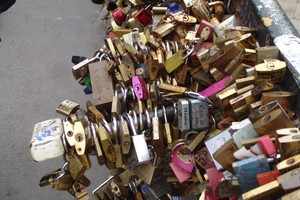 [Editor’s note: In early June 2015, the city of Paris decided to remove the love locks from the Pont des Arts because of the damage they were causing the bridge.]

You know all those love locks clamped onto Paris bridges? Well, it’s time for them to go.

Those locks – 90,000 pounds of them on the Pont de l’Archevêché and a whopping 205,000 pounds on the longer Pont des Arts – have become a blight, not to mention destructive to the bridges – many panels have collapsed under the weight – and the keys thrown into the water below are rusting and polluting the Seine.

Enough! Lovers need to find another way to express their everlasting devotion.

So disgusted with the mess were two American women, now residents of Paris, that in January 2014 they started a website, where they have waged a war against the locks.  They even have a petition, signed by over 10,000 people, objecting to the locks and asking city officials to ban them – not only on bridges, but on all public monuments and structures. You can sign it, too, and you should if you care about the aesthetics of Paris. City officials need to hear your voice. No one knows for sure the origin of the idea of clamping a love lock to a bridge, although Adam Gopnik wrote in a recent issue of The New Yorker that it probably derives from such a scene in the 2006 Italian romantic movie, “I Want You.” In any case, the locks started appearing on Paris bridges in 2008. What once seemed such an innocuous, well-meaning idea has become a scourge. There are locks on locks on locks – mounds of them – more than three-quarters of a million and growing, according to No Love Locks. Eight bridges over the Seine and three bridges over Canal Saint Martin have lock blight. Locks have even begun to appear at the summit of the Eiffel Tower and on streetlamps. No Love Locks founders Lisa Anselmo and Lisa Taylor Huff have until recently fought a lonely battle against the locks, but finally the City of Paris is listening. The two women in June had an hour-long phone meeting with staff of First Deputy Mayor Bruno Julliard during which they made several suggestions on how to rid Paris bridges of this blight, including posting multilingual signs prohibiting locks, removing existing locks, banning the sale of locks within a certain radius, and offering an alternative venue where lovers could post a picture of themselves instead of locking their love to the grillwork of a bridge.`

In fact, last August, Paris City Hall launched a campaign to get lovers to do just that by sending a selfie to a special website sponsored by No Love Locks. Their less-than-catchy slogan: “Our Bridges Can No Longer Withstand Your Gestures of Love.” Yes, some people have posted photos, but an awful lot of people didn’t get the memo. On the Pont des Arts, which once boasted one of the best views both east and west in Paris, the city has mounted wooden panels over the mounds of locks to prevent further “attachments,” yet another stake in the aesthetic eye because people scrawl graffiti on them, creating an even worse eyesore. No one seems to give a thought to the possibility that this is vandalism. But it is. And the City of Paris is complicit in these acts because until recently it was spineless in taking steps to discourage or prevent them. Steps are finally being taken to improve things, however. The city has replaced three panels on the Pont des Arts with glass test panels, each with different shatter-resistant, antiglare, and antigrafitti properties, so at least at those panels one can get an idea of what the view would be like if the bridge were returned to its original state. Think about it though: There are 110 panels along the Pont des Arts. Every one of them needs to be replaced. So you get an idea of how destructive the locks have become.

And by now, isn’t the idea just a little bit jaded? Is that really the best lovers can do to express their love – perpetrate an act of both vandalism and visual and environmental pollution?

The fact that the city government has allowed this disease to spread is all the more incomprehensible and even irresponsible given the fact that the bridges with the greatest lock blight are in a UNESCO World Heritage Site. It seems especially shameful that a country that has always respected and even revered its “patrimoine” – the rich meaning of which the English word “heritage” does not capture – would allow this problem to spread uncontrollably.

Which brings me to this. The lack of action to address this problem by the City of Paris is perhaps a metaphor for the erosion of standards to which even Paris, once considered the standard bearer of aesthetic appreciation and beauty, has acquiesced.

But this fad has run its course. It’s over. Let’s help Paris regain some of its luster. If you come to Paris, you should enjoy everything this city has to offer – and it offers plenty of romantic opportunities. But delete from your to-do list perpetrating acts of vandalism and pollution in the name of love.

You’ll feel better for it and everyone else in Paris will thank you.