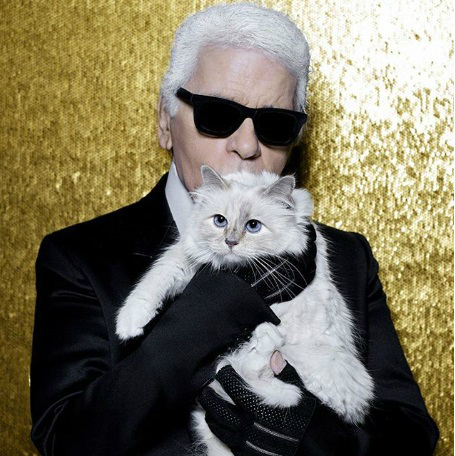 In the wake of iconic fashion designer Karl Lagerfeld’s death, there is a glamorously dressed heiress poised to inherit millions of euros of profits from his Chanel, Fendi and own-label empires. She has a penchant for pearls, caviar, foie gras, antique lace bed-sheets and four-figure designer handbags – yet this is no mistress and those luxurious bags are not storage spaces but rather somewhere convenient to take a nap.

Welcome to the surreal world of Paris’s most pampered pussycat – Choupette.

Lagerfeld raised the perfectly arched eyebrows of every fashion model on his catwalk when he – hopefully jokingly – announced that he wanted to marry his cat. Yet what is the story behind the seven-year-old Birman, who pre-dates even Grumpy Cat?

Originally the pet of male fashion model Baptiste Giabiconi, Lagerfeld laid claim to her after a short stay at his home and then refused to part with her when he left. “I’m sorry,” he recalled saying to her bewildered owner, “but Choupette is mine!”

Her adoptive “daddy” then set about making her an internet star, with her own website, fashion merchandise and makeup collaborations. Naturally, she does not actually wear the mascara she markets, although rumor has it that beauty treatments for the pampered puss have included dying her whiskers to exactly match the color of her fur.

Clearly, Choupette has diva credentials. She eats only gourmet food, travels exclusively by private jet and has her own trust fund, not to mention stars in a book devoted to her – Choupette: The Private Life of A High-Flying Fashion Cat. Plus while, in his lifetime, Lagerfeld boasted a personal library of over 100,000 books, his feline friend acquired roughly two Instagram followers for every title in his collection. Despite being a social media star, the photos that exist of this kitty go far beyond the 737 on her account – in fact, Lagerfeld had been accustomed to receiving hourly picture updates throughout the day from one of her two designated maids.

Happy #NewYear from Daddy @karllagerfeld and moi. May 2017 be a sparkly as my big blue eyes. ✨?? #KarlLagerfeld #Choupette #Chanel #Fendi

While the designer was often criticized as arrogant, the slavish devotion he had to his pet might tell a different story. “Everything is controlled by her,” he once told an interviewer. “She wakes me up at 7am because she wants me to bring her fresh croquettes.” It is rumored that, following his death, Choupette will retain the services of master chef Toyofumi Ozuru (formerly of Nobu Paris), who revels in providing the celebrity feline with tender Japanese beef.

Although Choupette has gained millions from her occasional modeling jobs – for instance, appearing in shoots for Vauxhall Corsa and Vanity Fair – Lagerfeld generally preferred for her not to lift a perfectly pedicured paw. “She gets offers for food commercials,” he once boasted, “but it is out of the question. She is a kept woman.” There is little chance, then, of her ever needing to catch her own mice – especially as two maids tend to her every nutritional whim, rotating shifts to be able to provide the finest caviar 24 hours a day. Unlike some of us mere humans, she allegedly refuses to touch any food that is “left over from the night before.”

Her lifestyle might appear lavish, but – in Lagerfeld’s eyes at least – Choupette had earned her keep. With the help of digital marketer Ashley Tschudin, who runs her website, the feline has become quite the passive marketing mogul. Bizarrely, just two weeks before Lagerfeld’s death, a promotional feature for cannabis oil (CBD) appeared on the site, touting cannabidiol-infused camomile tea and “gummy” sweets to relieve anxiety. However by the day of his demise, posts had shifted from CBD, hair care routines and cat-shaped makeup palettes to a memorial post dedicated to “a creative genius who now sits in heaven beside Mommy Coco Chanel.”

Not, of course, that Lagerfeld has always been quite so respectful to the Chanel brand’s original founder, or her matriarchal status. When he first arrived in 1983, he condemned the classic collections on sale as “hopeless” and vowed only to become its creative director if he could “completely change” its look. He would later crow triumphantly, “What I’ve done, Coco Chanel would never have done. She would have hated it.”

Maybe his boasts were not entirely true, as the collections still contain, to this day, some of the key ingredients of Chanel’s original designs – the pearls, the tweed jackets and the sailor-style cruise collections, a concept pioneered by Coco back in 1919. Plus Lagerfeld’s 2018 version featured a giant cruise liner, “docked” at Paris’s Grand Palais, that was named after her then holiday home on the French Riviera, La Pausa.

However, back to matters more feline. Perhaps Lagerfeld would have been amused to learn that Choupette now has a rival as a neighbor. The five-star Hotel Castille – right next door to Chanel’s rue Cambon store, where a myriad of Lagerfeld designs are displayed – plays host to a much-loved Russian Blue by the name of Heliot. Of course, without a multi-million euro income at his disposal, he is the poorer cousin – or, as one suspects a miniature Lagerfeld might sneer, a “mere peasant”. Yet the adorable kitty is a firm favorite, especially when he takes a break from catnapping to commandeer the concierge desk, greet guests and prompt broad smiles on their faces. 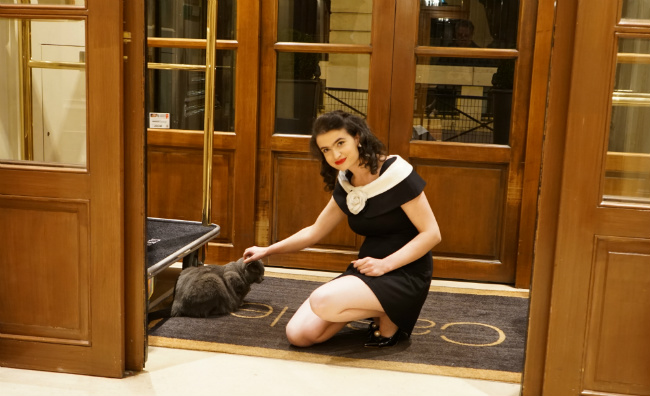 Chloe Govan with Heliot, the Russian Blue, at Hotel Castille

On the day I met Heliot, he was slightly aloof, although perhaps he was merely competing with his rival in the diva stakes, while strutting around loveably with his nose in the air. Currently, Choupette remains ensconced in a luxury property on Quai Voltaire, where he does not normally greet his public, but for those who agree that cats add great character to a home, Heliot is available for a stroke anytime to guests of Hotel Castille!

For more on the cats on Paris, check out Pet-à-porter: Chilling with the Cats in Paris AND Paris Cats, In Pictures: Felines on Parade