An Interview with Oliver Gee, Author of Paris on Air 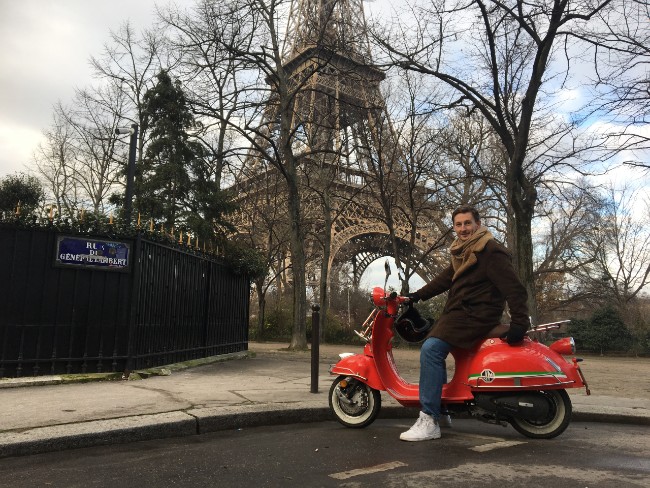 Oliver Gee is an award-winning Australian writer, videographer, and podcaster who lives in Paris, where he is host of the very popular Earful Tower series. His new book, Paris On Air: A Memoir has just been published; and he graciously agreed to answer a few questions for Bonjour Paris about this new creative adventure.

Janet: Oliver, I love this book. What made you decide to write it? What were the most rewarding/surprising/difficult parts of the process for you? And do you have a favorite part?

Oliver: Thank you so much, it’s an honor that you were among the very first to read it. I figured I’d been in Paris during a super interesting five-year period, kinda bookended by those first terror attacks at Charlie Hebdo and the fire at Notre Dame. I wanted to document what it was like to live in this time, not just as a journalist and podcaster, but also as a young man. So many Paris memoirs seem to be written by women, and I’m not quite sure why. But also I like telling stories, and I felt mine was a good one. Love, failure, success, a wedding—and five years worth of my observations on Parisians.

I self-published the book after a bunch of authors told me they wish they’d done the same. I’m no expert on the publishing industry, but it sounds like a mad world, and I didn’t even dip my toe in it. I’m fortunate to have a kind and loyal following online, and they helped me make the book happen via crowdfunding. 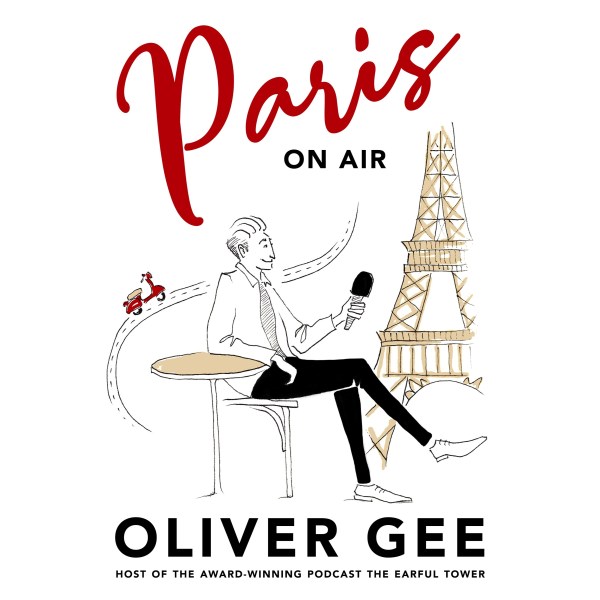 The hardest part of the whole process was how the lockdowns have thrown a major spanner in the works. I had to cancel a mammoth US book tour. But it also meant that I pushed out the e-book early so that people in quarantine could have fun reading it. Their responses have been my favorite thing so far. Someone told me they laughed until they had tears in their eyes, what a lovely thing to hear!

Janet: I also love the cover of your book, can you tell me about the artist? Also, what does the title of your book refer to?

Oliver: I love the cover too. It’s the work of my wife Lina, who sketched me holding a microphone, sitting by the Eiffel Tower. You can see our little red scooter in the background. I don’t know how she captured me with so few penstrokes, but there you go. Lina can do amazing things with a pencil (or a paintbrush). You can check out her work on Instagram, @parisianpostcards.

The title, Paris On Air, refers to the podcast/radio thing of being “on air.” But it also hints at the sheer joy of “walking on air,” which, incidentally, is how I made a career out of my podcast: by walking around Paris while “on the air,” doing live streams to Facebook and YouTube.

Janet: You and your wife took a honeymoon trip around France last year, on your little red scooter. What was one of your favorite moments from that trip? One of the funniest? One of the most challenging? What were some of the favorite places that you discovered? Also, what did you learn about France during that trip that you didn’t know before setting out on that journey?

Oliver: That seems like a lifetime ago already, even though it was just 2018. We went so so far at such low speeds—4,000 kilometers at 45 km/hr, and 2,500 kilometers at 30 miles an hour. We sometimes drive around Paris now and say to each other: “Can you believe we took this thing around the whole country?” My favorite thing was meeting all the lovely people. Anyone who believes the stereotype that French people are rude should rent a scooter and drive around the country. You’ll find it’s the opposite.

The most challenging part was getting Lyme disease. Some stupid French tick apparently wanted me dead, and I was bedridden in Normandy. Then my medication tried to kill me—twice! I bet no honeymoon has ever involved so many trips to the pharmacy and doctor. 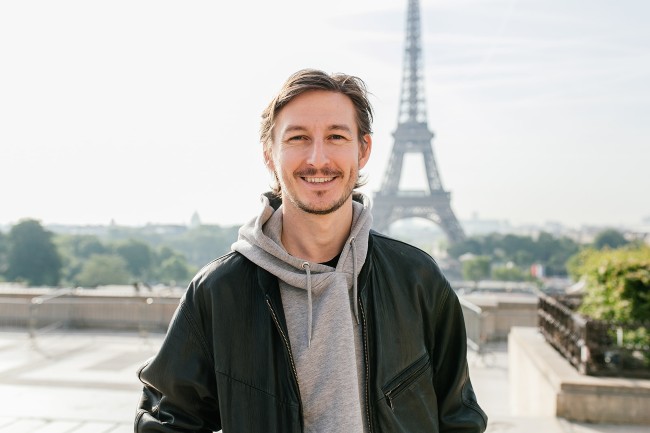 Janet: You had been planning a book trip across the United States during the month of May this year. What is the current status of that plan, given the coronavirus epidemic? Will you still be going? And if not, what will you be doing instead to promote your book?

Oliver: There’s no way that trip is going to happen, which is such a shame. We had such grand plans, and the American listeners to my show were so lovely in helping me plan. As for a Plan B, I’m not really going on the offensive to promote the book from lockdown in Paris. I think it gets really boring when people push anything too much. I’m focusing instead on trying to find ways to entertain people while they’re in lockdown.

Janet: It’s a particularly challenging time, right now, for people who want to travel. What are some of the ways you’ve come up with to help people enjoy Paris if they’re not able, for the time being, to come here?

Oliver: Social media has never been more boring. But I’m determined to be the most positive dude in lockdown. The other day I hosted a Paris pub quiz live on YouTube. 130 people around the world took part, answering questions to win prizes. After sneakily mentioning radishes in a previous question, I fooled everyone with this one: “What vegetable do Parisians put on the grave of Monsieur Parmentier?” Answer: “Why, you’ll have to watch my video if you want to know…”(OK, fine, the answer is “potatoes”). There are more pub quizzes to come, and you can find them here.

Janet: What do you love most about Paris? And what has been the most challenging, as an Australian expat, about learning to live here?

Oliver: I love going for very long walks and looking at the details. I love everything: the gates, the doorways, the balconies, the history. The people, the bakeries, the crooked buildings and cobbled stones. I love it all! What I don’t love is the administrative chores that come with doing everything, but I have a few tips and tricks for how to win the game. You’ll have to get the book to find out, though. ☺

Janet: Any more books in the works?


Oliver: No plans just yet. The great thing about self publishing is that the book is printed really soon after the last edit. The story in Paris On Air brings us up to October 2019, which was practically yesterday. So I’m gonna be focusing on The Earful Tower for now.

Previous Article Paris Culture Finds a Way: What to Watch at Home
Next Article Reading About Paris During Lockdown