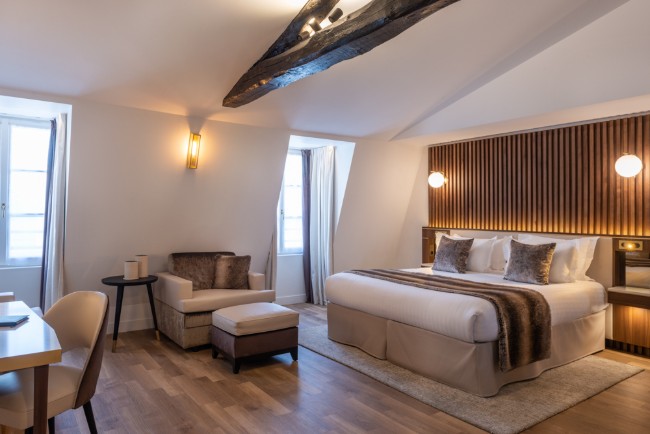 “The hotel business is my passion,” says Catherine Dupasquier of West Etoile Elysées, a group consisting of two well-rated hotels in the 17th arrondissement: Les Jardins de la Villa and Villa des Ternes. “And, with Hotel Lord Byron, we now have three 4-star hotels in the west of Paris between Porte Maillot and the Champs-Elysées,” she explains. 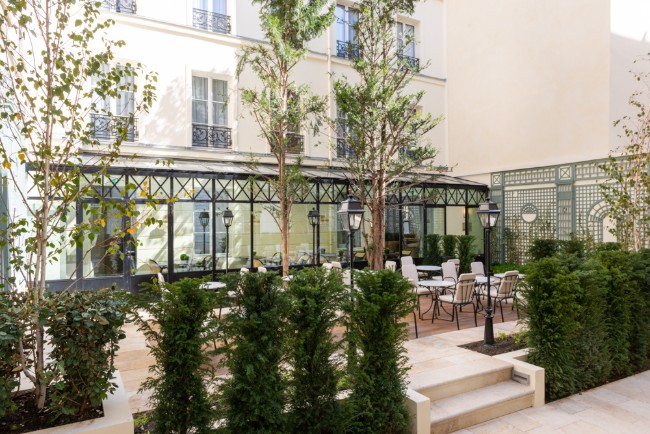 The latest jewel in the hotel group’s crown is housed in a handsome white stucco building located on rue Chateaubriand, just steps from rue Lord Byron and the Champs Elysées. In the neighborhood you have chef Pierre Gagnaire’s ***Michelin star flagship, not to mention the iconic Cinéma Balzac, Le Lido, Louis Vuitton’s megastore and gallery, Bulgari, and umpteen luxury brands.

Officially inaugurated on October 31, 2019, the third address took 18 months to transform. “Because we had the fantastic opportunity to acquire The Mayflower, the hotel next door! It was a challenge to bring the two buildings together,” smiles Mme Dupasquier. “We now have two hotels in one!” 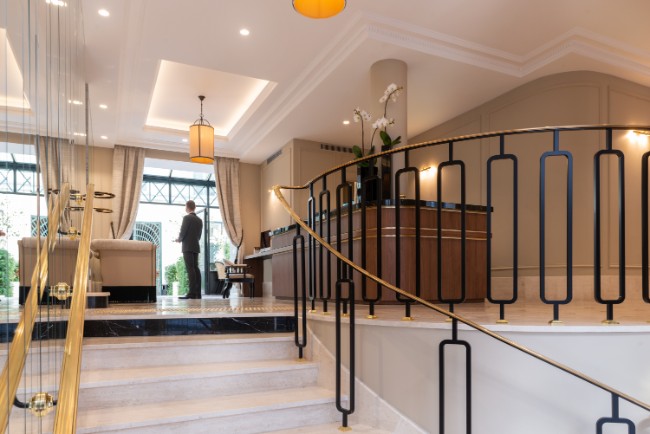 “I travel constantly, between Asia and the United States, and am always on the lookout for interesting details. Each stay in another hotel gives me inspiration for my own hotels,” she says.

“For Hotel Lord Byron, I wanted to create a contemporary and warm atmosphere, emphasizing the luxury of space, both in rooms, suites, and public areas. A boutique hotel with the feel of a private mansion, where dogs are welcome,” she adds patting Pearl, the pretty white Pomeranian (the TouTou tarif is €15 per day). 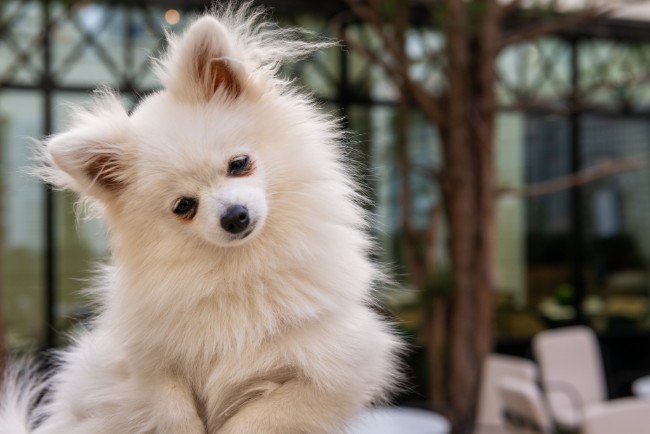 For the 54 rooms and suites (some with mini kitchenettes and terraces), the architect is Raluca Urseanu, the interior by award-winning designer Alexandre Danan of EuropeanDesignOffice. In-room products are by Fragonard, and all have Nespresso machines with complementary coffee capsules.

The sheltered landscaped green and pleasant inner courtyard garden is a welcome respite from the bustle of the Champs Elysées. Downstairs there’s a slick Fitness Room and Hamman. No excuse then! 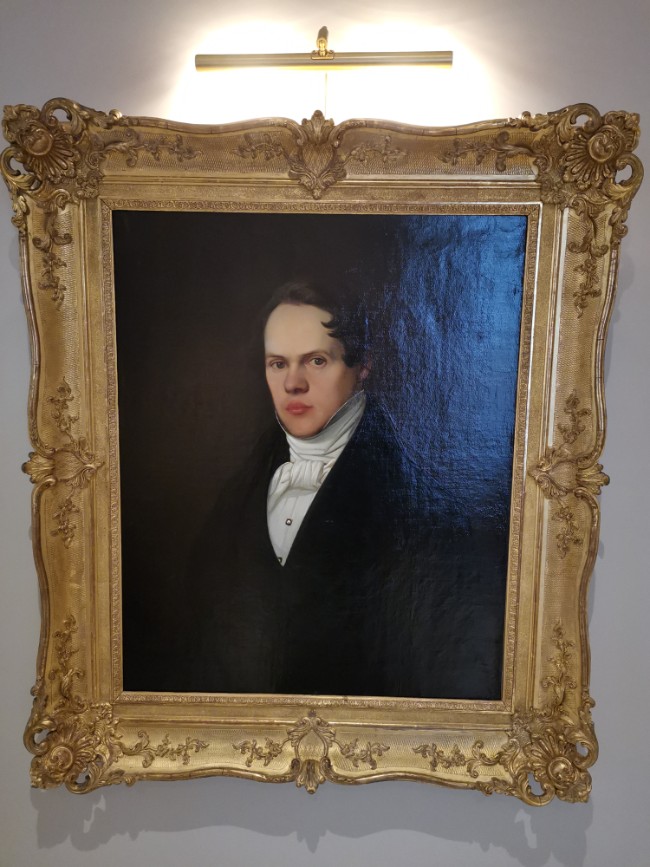 The lobby-lounge showcases a handsome recently restored oil painting of Lord Byron – a discreet tribute – as if he were the master of the maison. An iconic English poet, figure of pre-Romanticism, Byron (1788-1824) was considered by Goethe as the greatest free spirit of his time. He was adored by Musset who dedicated a poem to him, and admired by Victor Hugo, George Sand, Lamartine and Vigny. And he was “mad, bad and dangerous to know”, according to Lady Caroline Lamb. 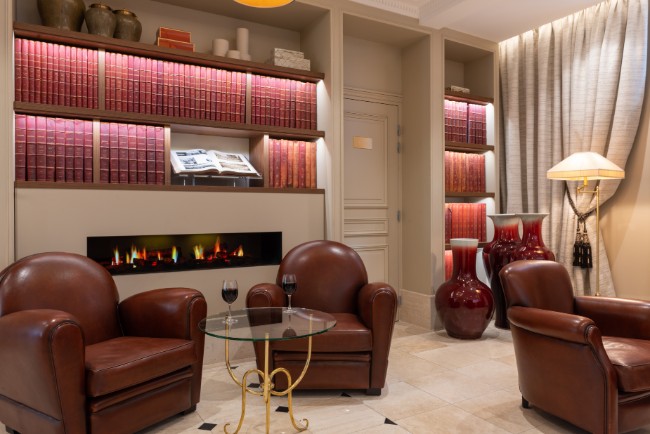 Take some refreshments from the Honesty Bar. Then head over to the welcoming fireplace flanked by bookcases. A game of backgammon? A tranquil spot to read the New York Times! In the style of an elegant mansion of yesteryear: sink into comfy leather club armchairs.

On the bookshelves that’s the L’Illustration collection – a former weekly newspaper. The red bound volumes cover the period from 1889 to 1944 when it closed. Daily, one of the Hotel Lord Byron brigade carefully turns up the page of the day. I’m sure that George Gordon Byron, 6th Baron Byron, would appreciate the atmosphere – I certainly did. 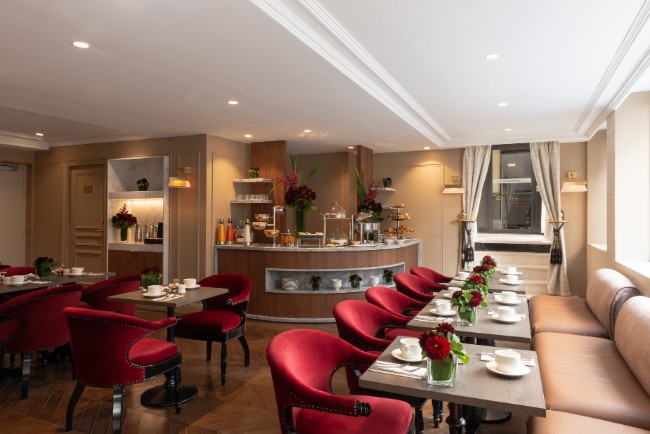