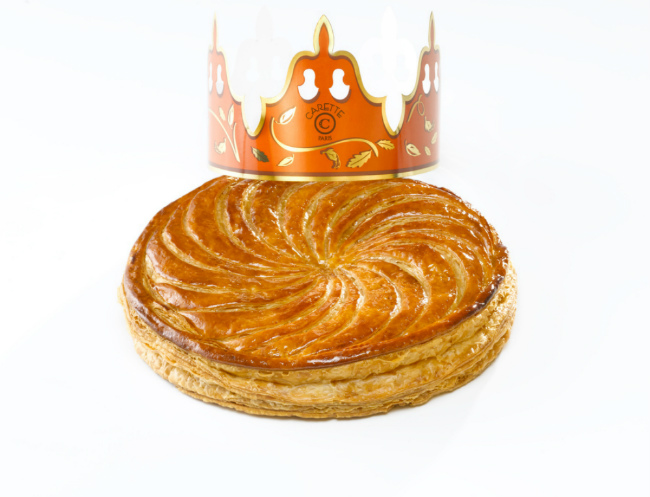 The New Year parties may be over but there’s yet another gourmet celebration to enjoy in Paris this week. Just when it’s time to take down the festive decorations, trust the morale-boosting French to have a wonderful tradition of cutting “la Galette des Rois” (or king’s cake).

A giant puff pastry dessert filled with frangipane (almond cream added to pastry cream), the galette des rois is traditionally served on Epiphany, the Feast of the Kings (Twelfth Night), on January 6th or the first Sunday in January. The Parisians have such a wealth of patisserie choices that the Galettes des Rois continues in the City of Light throughout the whole month of January.

Perhaps best appreciated as a family dessert, the Galette des Rois comes with paper crowns and is particularly exciting for children, as there is a fève (“bean,” although now a more elaborate trinket) hidden inside the cake. Whoever finds the trinket is crowned King or Queen for the day but, so there is no cheating, tradition has the youngest person present sit under the table to announce each person’s name in the room as the galette is cut by an “older and wiser” person above. This could be fun at the office!

2016 is no exception to the creative genius of Paris’s pastry chefs, who have once again produced a spectacular line-up. I can’t possibly mention them all, although my aim is to try and taste most of them – in between copious amounts of soup – until the end of January. In the meantime, here are just a few ideas of the choices available from many of our Paris favorites. 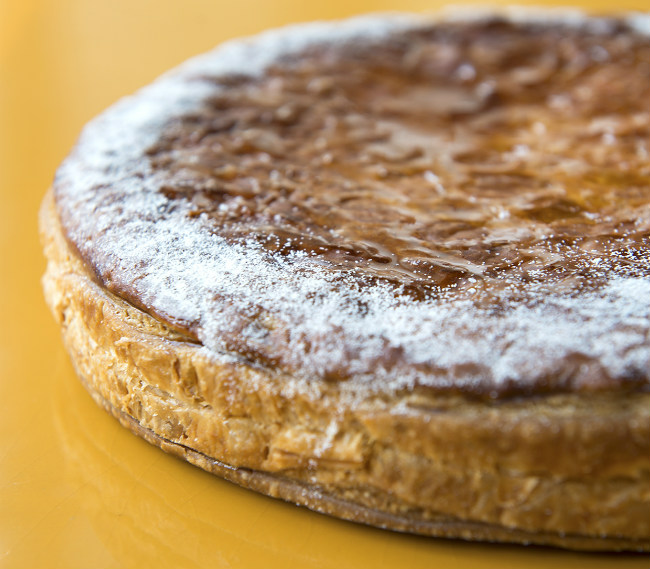 Most pastry chefs propose the classic version and many also offer other variants. Philippe Conticini (Pâtisserie des Rêves) loves going back to the classic gourmet tastes of childhood and takes the traditional frangipane route, with its classic hint of rum in a sticky puff pastry, as does La Carette; I particularly love the trinkets with pyramids of macarons. Stohrer, the oldest pâtisserie in Paris, also simply goes classic and includes vintage metallic bean trinkets covered in gold leaf.

Breaking away from tradition, Gâteaux Thoumieux adds cinnamon and crunchy Speculoos biscuits (Biscoff cookies) as a topping instead of the usual sun-decorated golden pastry; while Jonathan Blot of Acide gives a mysterious dark look adding pecan nuts and adding a natural, non-refined sugar, galabé, from the isle of Reunion.

Not a huge fan of frangipane? Pascal Caffet just adds more of a hint of almond and presents his galette as a Couronne des Rois or crown, complete with a surprise pot of artisanal praline spread for you to do some of the work too. 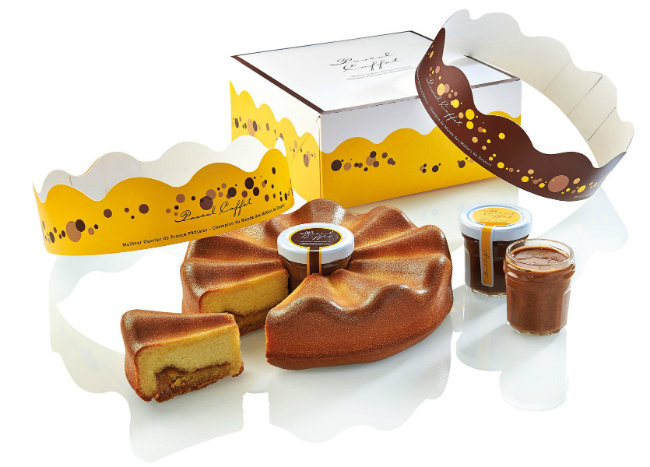 If it’s the fèves or trinkets you’re after– (my daughter keeps a collection of them, although not large enough to open the likes of the Loire Valley’s unique fève museum in Blain)– many patisseries have joined with designers to keep collectors happy and some patisseries sell the trinkets separately.

For queens who love to thread through a collection of porcelain trinkets portraying the flowers of Grasse used by the perfumery, Fragonard, Lenôtre have a flower galette which comes with a mini vaporiser of orange blossom water, to spray on the galette just as it comes out the oven to reheat.

More for the Petit Prince type of King, Christophe Michalak fills his with rocket trinkets and if you’re looking for a crown with a difference, try the super-hero mask instead.

Gerard Mulot goes for gold with his trinkets designed by Simlucide in all of his six varied galettes.

For the curious gourmet, Cédric Grolet of Le Meurice surprises us with notes of coriander and the trinket is even in the form of a coriander’s outer shell. 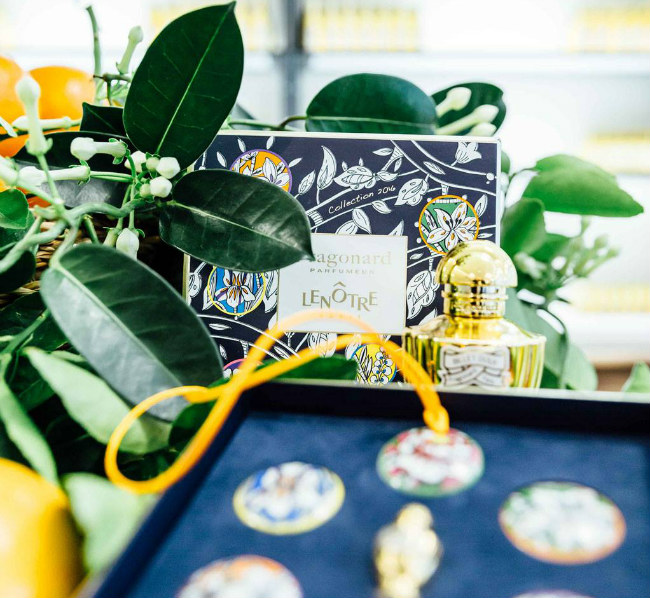 Pierre Hermé adds candied citrus peel on top a fine layer of rice pudding for something a little bit different. Arnaud Larher adds a touch of lemon; Fauchon adds zesty lime as well as apple compote all in the form of a holly leaf…

Who said the galette should always be round? This year Dalloyau has a malted puff pastry encasing an almond cream elaborated with peanuts and cinnamon-poached pears. Also square and with orange notes is by Christophe Roussel, whose galettes are exclusively available at his Montmartre boutique only this Sunday 10 January.

Actress Catherine Deneuve is also the queen of caramel: the result of her influence on Hugo & Victor is a svelte caramel layer to the inside frangipane.

Sadaharu Aoki fills his galettes with an ample amount of frangipane which, for me, adds to its perfection. This year he adds a caramel and hazelnut version to his traditional almond galette, and I’m happy he has also continued with his famous Japanese-inspired Macha green tea signature delicacy. 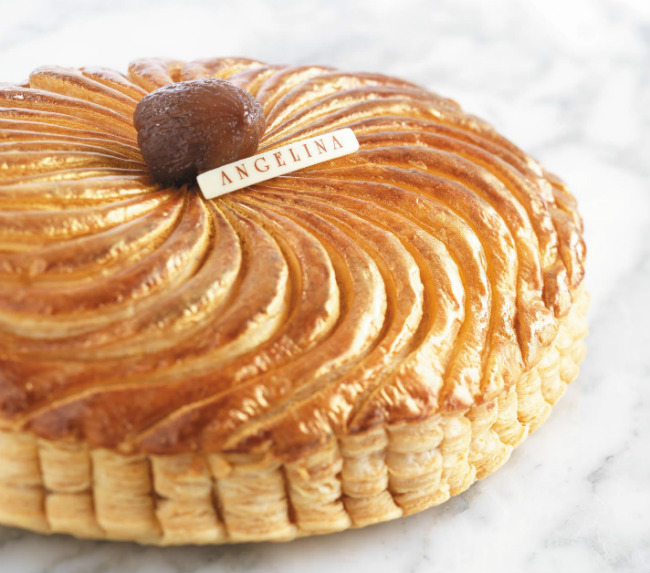 the galette des rois by Angelina

For the chocoholics among us, it’s no surprise that La Maison du Chocolat continues with their chocolate galette, but others such as Jacques Genin propose a chocolate ganache filling and chocolatier Jean-Paul Hévin also tempts us with a Brazilian Grand Cru version hinting some candied chestnut. Chestnut being one of the signature Mont-Blanc pastries at Angelina, their galette also includes dark chocolate chips.

As if these aren’t enough, don’t forget you’ll find Galettes des Rois in many French supermarkets. Although Monoprix has an organic galette filled with open-book trinkets that could have you winning a diamond, I spotted many ready-made puff pastry rounds with Calimero trinkets to make your own version at home.

This is a recipe where I like to cheat and see nothing wrong with using good quality ready-made puff pastry; just ensure you use pure butter pastry. I have included a recipe for a Pistachio and Griotte Cherry Galette des Rois in my new book, “Teatime in Paris”. For a more classic traditional galette recipe, turn to my recipe on MadAboutMacarons. The Galette des Rois is normally served slightly warm. Just reheat the cake for a few minutes in the oven before serving.

Wishing you a happy Epiphany, many Galettes des Rois, and enjoy being King or Queen for the day – although no cheating who’s the youngest at the table! 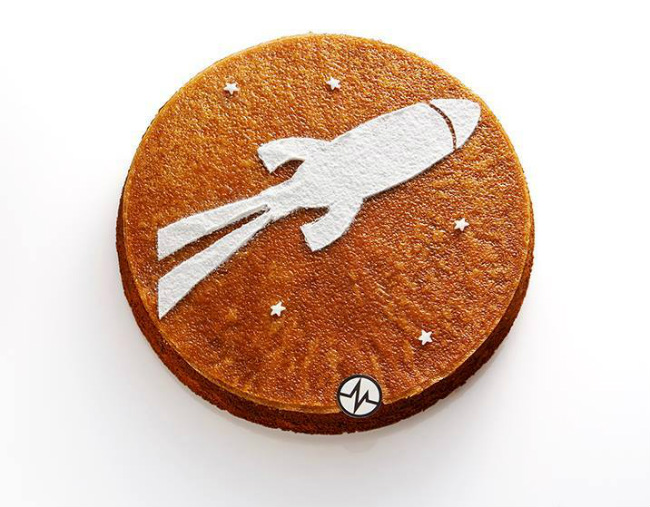 Previous Article Lost in Cinema Babel? Not with Lost in Frenchlation
Next Article What Lies Beneath the Canal Saint Martin