Living permanently as an expat in Paris, it is tricky finding the right balance between curiosity and gourmandise. But a classic tale of schadenfreude well-equipped me from an early age to live in France. My bedtime stories growing up were of my father’s trippy 1970s adventures in Strasbourg, France. He previously accrued a joie de vivre hitchhiking through French Canada with a guitar-playing Frenchman. Neither spoke the other’s language. When I asked how they communicated, he chortled, “I dunno. We just played music.” Without his fingerpicking sidekick, when he arrived in Strasbourg early one summer morning on July 14th, with red in his eyes and a guitar on his back, the town was completely shut down. The only thing open was the ubiquitous boulangerie. He gestured his way into a bag of a dozen croissants, enough to entertain a café’s morning crowd au comptoir.

As the brown paper bag of warm croissants quickly became transparent, he ripped it open, tearing each croissant apart. The crispy exterior flakes ripping away in a spiral to reveal the soft, eggy center, all to the fragrance of pure butter.  He had never tasted anything better. Consequently, he has never been more ill. Like anyone experiencing France for the first time, there is no finer discovery than a perfectly executed pastry.  And there is the joy of knowing it probably exists just around the corner. And with all the struggle and bureaucratic wild goose chases of living in France, there are still some revelations to be found at the local boulangerie.

French pastry has had hundreds of years to perfect itself. According to the S.G. Sender and Marcel Derrien’s quintessentiel French door-stopping pastry Bible « La Grande Histoire de la Patisserie-Confiserie Francaise », the two backbones of French pastry, pâte à choux (the delicate, eggy puff of the creme puff) and pâte feuilletée (the buttery, flaky dough responsible for the croissant and all of its successors), go back to the XVIe century. But the groundbreaking cornet de papier, or the ubiquitous pastry bag, jump-started patisserie into a new stratosphere of sophistication. It was invented in 1808 by the most celebrated patisserie in Bordeaux, la maison Lorsa. According to Sender and Derrien, Lorsa interrogated his employees after curiously finding his name written in whipped creme at the top of a cake. A young pâtissier was responsible for borrowing the piping technique used for making dragées. Whipped cream was stuffed into a paper cone, cut on the end, and used to precisely pipe a filling. The invention launched a renaissance of revolutionary filled pastries, advancing the evolution of macarons, the French wedding staple the croquembouche, and the religeuse. 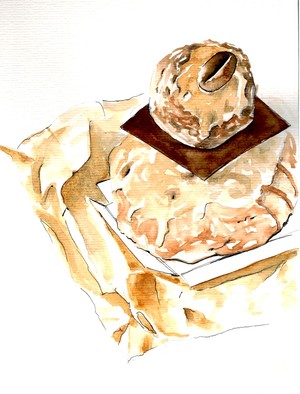 A few decades later, la religeuse first appeared in 1856. Two rounds of choux pastry, one bigger than the other, are stuffed with crème pâtissier or pastry creme, iced with a nappage, or icing, then stacked on top of one another to create a form evoking its namesake, a portly little nun in habit. Much like their cousin, the eclair, they come in both chocolate and coffee varieties.  Drawn to the coffee religeuse at my local boulangerie, the creme-filled choux were divided with a square of chocolate, evoking the pastry lovechild of a snowman and Pierrot, the heavy-collared, sad-faced clown of Commedia dell’Arte. After my husband sniffed out the religeuse in the refrigerator, I was obliged to share. The icing miraculously held it together as I cut it into two parts, the flaky pastry shell containing the intensely-concentrated coffee creme. As delectable as it was, there was nothing holy about the religieuse. My gluttonous curiosity sent me back out to the boulangerie so we could taste test the chocolate version, too. 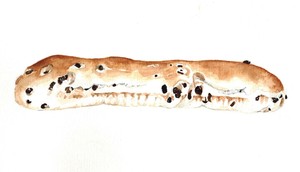 Speaking of which, walking into a boulangerie, the counter is usually split in half. On one side, the pastries are the handiwork of the patissier. And the boulanger is responsible for the bread and leavened cakes. This includes the viennoiseries, baked goods with a yeast-leavened base or puff pastry, like croissant, pain aux raisins, brioche, and viennois au chocolat. The viennois au chocolat is a classic gouter, or a staple snack for the under-12, after school crowd. These chocolate chip-studded loaves humbly adorn the arms of the chicly-coiffed Parisien moms who await their children at the sortie d’ecole. Nevertheless, with the chocolate chip drought in France, this treat is easy to love. The soft, yeasty dough envelopes a smattering of dark chocolate chips. With a cup of coffee in the morning or the afternoon, the long torpedo shape is condusive to dunking, perfectly melting the chocolate chips. Let me be rational and ask, is it 4 o’clock somewhere? 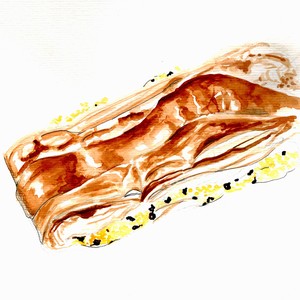 Speaking of chocolate chips, drops, also known as choco suisse, is another regular viennoiserie.  Pâte feuilletée is folded over pastry creme and chocolate chips, sliced and baked into rectangular slabs. The yellow pastry creme and chocolate chips peek out of the sides as it bakes. English is often squeezing its way into French language. But what could drops mean? May I dare to make a connection to dropsies? My very patient boulanger puts this mystery to rest. Drops is a synonym in French for chocolate chips. Although I could easily accept a viennois au chocolat for breakfast, drops is the most gourmande of the viennoisseries, better suited to be shared for an afternoon snack.

Nothing can outweigh the oral history of my father’s first croissant. But as a visitor or just an expat in search of an afternoon snack, for less than few euros, a little curiosity and gourmandise can still unlock a rich, edible tale of French craft and tradition. And possibly a few food memories along the way.

Bustronome: A Moveable Feast in Paris

Taste of Paris 2017: A Culinary, and Theatrical, Tour de force