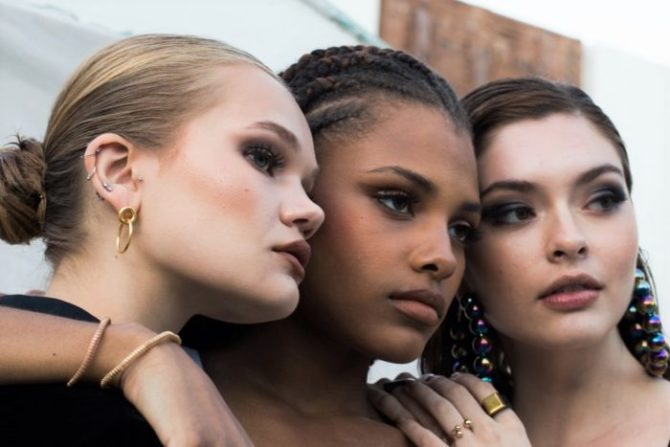 Fall is coming: the leaves are turning, the flowers are dying, and Christmas decorations will soon fill stores prematurely. But in Fashionland – a world which constantly swivels its head to the future – next year’s flowers and styles are just coming into bloom, as the Spring-Summer 2020 shows took over Paris the last week in September.

As was to be expected, many top houses generated warranted buzz.

Over at Balmain, the 90s were in full swing. The 90s fashion trend has been ongoing for at least a couple years – with chokers, overalls, and other of-the-era staples coming back into fashion – so it came as no surprise that more homage was paid. Designer Olivier Rousteing’s show for Balmain included A-listers like Eva Longoria, who looked on at the 90s-inspired garbs.

French house Celine, which is known for its ready-to-wear styles and leather goods, presented a Spring-Summer show focused on an earlier decade: the 1970s. Lots of denim, flowing locks, hippie dresses, aviator sunglasses, and more, were seen on the catwalk. Celine’s creative director, Hedi Slimane, has been shaking things up in the fashion world lately with his reinvention of Celine’s stores.

Italy’s Valentino was lauded for its simplicity showcased on the catwalk for the house’s 2020 Spring-Summer line. Stars like Naomi Campbell were vocal fans of the designs, which had an eye on clean lines, light colors (lots of whites), and classic cuts. Angel-like flowing sleeves gave the show a heavenly feel. Valentino’s designer, Pierpaolo Piccioli, said of the show: “By subtracting color, shape, and volumes come to the fore.”

Givenchy stuck with lots of denim looks, as curated by designer Clare Waight Keller, who cited a desire to mix “tough urban energy” with “patina of time” for her infusion of a show for the famed house. The show touted early 1990s looks like bra tops, denim skirts, baggy jeans, and other looks you might see on 90s TV shows like “My So-Called Life.”

Amusingly, Thom Browne’s show, which presented looks for warmer weather, plopped guests in a “winter wonderland,” complete with fake snow. This playful and silly aesthetic for a Spring-Summer show set the stage for fun. Browne’s looks included dolphin-shaped shoes and some wild head contraptions, which one can’t really imagine wearing to a party, but were fun and fashionable all the same.

One of designer Vivienne Westwood’s most buzzed-about moments from the iconic British fashion designer’s show was the final look. Bella Hadid closed the show wearing an eye-catching white gown and fabric-filled umbrella. Some called it bridal-esque, but it could easily be argued that it looked like a costume fresh off the stage of Alvin Ailey’s seminal work, “Revelations.”

The Saint Laurent show also closed with a bang (Naomi Campbell, specifically). The quintessential supermodel marched down the runway in a dramatic black sequined pantsuit, fit for fashion royalty, which she is.

Stars were, of course, out and ready to be reckoned with; celebrities like Rihanna were in Paris, making a splash with new hairstyles and fashion lines. (Rihanna’s fashion line, Fendy, had a show in Paris.) Cardi B’s ensemble, designed by Richard Quinn, generated headlines (despite the fact that it rendered her unrecognizable).

Some celebs, though, stayed home, and their absences made international news, like Kylie Jenner, who was hospitalized and had to miss her cosmetics line’s rollout during Paris Fashion Week. Fashion mainstays like Julianne Moore, and other Hollywood elite, elevated “PFW” tenfold.

Attendees come for the designer shows, but dress for the street style looks, and scope out street fashion almost as much as they look to the catwalk. This year’s street styles, which were enthusiastically captured by photographers milling about the Parisian streets, showed lots of looks that are more accurate predictors of current, and near-future styles. Fall looks like long coats and jackets, chunky knit sweaters, back-to-school-level-fresh haircuts and ‘dos, pumpkin-colored blouses, and more, reminded us to keep our mind on the present, yet prepare for – and plan on – a bright, exciting future ahead; fashion, or otherwise.

Makeup but make it Fashionn?? how cool is this @balmain belt with our eyeshadows.. can’t wait for this collection to drop tomorrow at 8am pst on KylieCosmetics.com #KylieBalmain @kyliecosmetics