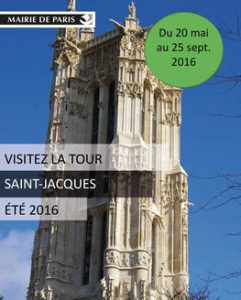 Climb to the top of the Tour Saint-Jacques this Summer

Take the unique opportunity to climb the historic 16th century Tour Saint-Jacques this summer. The spectacular gothic style monument was built in the 4th arrondissement of Paris between 1509 and 1523 and is a historic part of Paris’s skyline. Originally built as a bell tower for the Saint-Jaques Church, which was sold to the Revolution as a quarry and later destroyed, the tower is all that remains on the site.

Access to the top of the historic monument is usually closed, however this summer up until the 25th of September the Tour Saint Jacques will be open to all. After climbing over three hundred steps to reach the top, passing breathtaking 16th century statues and architecture visitors will be rewarded with some of the best panoramas in the city, don’t forget to take a picnic and enjoy the views with family and friends.

To celebrate the opening of the tower to the public, Des Mots & Des Arts will be offering guided tours Friday to Sunday at 10am – 7 pm.

On heritage days, Saturday the 17th – Sunday the 18th, access will be free, with 186 tickets available each day. Priority tickets will be given to those who arrive first, the tower will open from 9.30 am, so get there early to avoid disappointment.