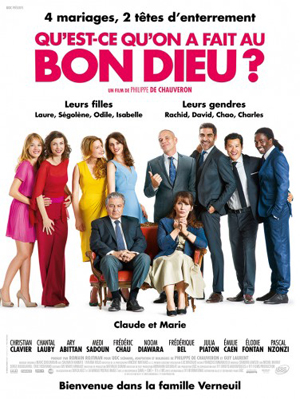 The French export small, intense intimiste films, but for local consumption they go crazy for broad comedies like Bienvenue Chez Les Ch’tis and Intouchables. The latter tend to be fun and corny, and relatively well-made, but like certain wines don’t travel well. Qu’est-qu’on a fait au bon Dieux (literally What Did We Do to the Good Lord?), directed by Philippe de Chauveron, is a big, splashy ethnic-racial-religious comedy that both celebrates and pokes fun at the melting pot that is modern-day France. The hokey tropes will be recognizable to Americans, but may also seem hopelessly archaic. The plot centers on a woman from a bourgeois family marrying an African and having to introduce him to her parents: in other words, Guess Who’s Coming to Dinner? (which itself seemed archaic even back in ’67).

There’s a funny twist, however: Claude and Marie Verneuil actually have four daughters, and three of them have already married, respectively, a French-Algerian, Sephardic Jew, and Asian. The upcoming wedding is thus the straw that will break the back of the old-fashioned provincial parents. Already there’s constant bickering reminiscent of All in the Family (the three sons-in-law take turns playing the Meathead). An additional twist is that the Ivorian groom’s father is just as bourgeois and racist as the bride’s. Yes—it’s The Jeffersons à la Française (or rather à la Africaine).

If these motifs resemble American movies and shows, what of it? All in the Family and Sanford and Son were adapted by Norman Lear from British sitcoms. And if they seem old-fashioned there may be a reason other than a fusty imagination (like short collective memories). After all, recent American films like Django Unchained and Twelve Years a Slave are essentially rehashings of Stowe’s Uncle Tom’s Cabin. 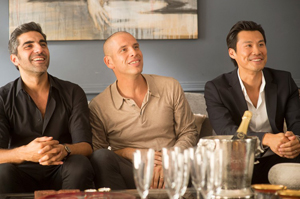 I saw the film in a populaire district in Paris, in a large theatre filled with raucous youths of Arab and African descent. They enjoyed the comic depictions of ethnic conflict in a light, good-natured way. While much of the jousting in the film is between the minority sons-in-law and the reactionary father, there’s even more among the three husbands. This perceptively expresses how a lot of racial tension in France is inter-minority, one group feeling encroached on by another. The director expertly shifts gears, increasing and then decompressing the tension.

Medi Sadoun as French-Algerian lawyer Rachid is the most pugnacious and charismatic of the sons-in-law. Ary Abittan and Frédéric Chau (not to mention Noom Diawara as the future husband) do their best, but they’re mostly just charming and handsome. The four daughters are attractive and sympathetic, but not too distinguishable. They’re like any set of ingénues in any TV sitcom.

The film’s lightening rod is father Claude, played by Christian Clavier, one of France’s premier movie comics. The role is an easy one, a blustering Archie Bunker. The traditional easy butts in French comedy remain the haute-bourgeoisie and the provincial. Here they get the blame for backward attitudes about race and culture. It would be less comfortable showing progressive Parisians who finagle places for their children in public but elite lycées, far away from minority kids, but that’s another film (don’t hold your souffle waiting for that one). 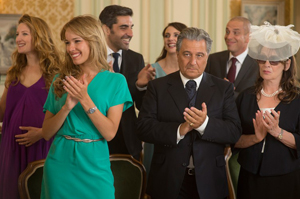 Chantal Lauby provides comically earnest support as Claude’s wife. But the real comic sparks come from Pascal N’Zonzi and Salamata Kamate as the Ivorian equivalents of George and Louise Jefferson. When the two fathers clash it’s like matter and anti-matter colliding, coming to a head when they go on a drunken bender. Salamata Kamate is transcendent as a larger-than-life (in every sense of the word) African wife and mother.

Perhaps too much of the comedy comes from talking-heads repartee. For such a broad comedy, more laughs could have come from physical humor and farcical situations. The wittiest moment in the film comes from a little joke involving an e-cigarette. And the most cutting is when our rainbow cast is finally able to share a laugh—at the expense of the Rom.