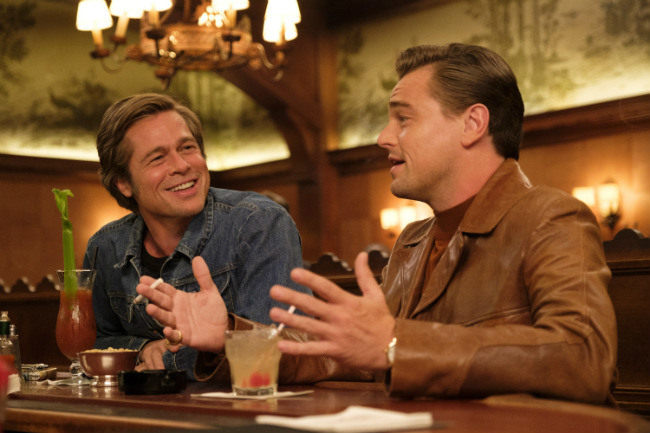 Members of the press lined up three hours in advance of the start of Quentin Tarantino’s much-anticipated new film, Once Upon a Time…in Hollywood, which had its world premiere in Cannes this week.

This year marks twenty-five years after Tarantino’s Pulp Fiction premiered at Cannes and went on to win the festival’s prized Palme d’Or. Many are speculating as to whether or not Tarantino will again take the Palme d’Or for this film. (Pedro Almodóvar’s Pain and Glory is rumored to give him a run for his money.)

Following a six-minute standing ovation in the Grand Lumière Théâtre in Cannes Tuesday night, the cast clapped along with the audience. A satisfied-looking Tarantino was given a mic and kept it short and sweet: “Thank you to the wonderful actors and the studio who helped me make this film, and thank you for being such a fantastic audience. Thank you very, very much.”

Tilda Swinton, Gilles Lelouche, and other international stars were on hand for the premiere as well. The following day’s press conference yielded a similar frenzied crowd, with members of the press clamoring to gain entry to the press room which was quickly filled to capacity. 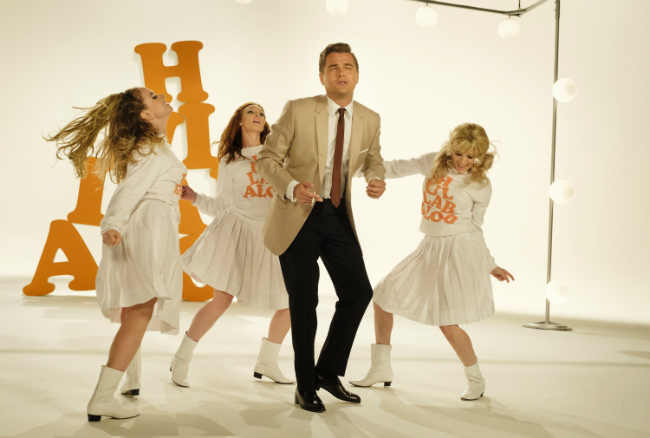 Once Upon a Time…in Hollywood. Photo credit: Cannes Press Office

Other big names like Kurt Russell, Dakota Fanning, Al Pacino, Lena Dunham, and the late Luke Perry, are also in the film. And its location, Hollywood itself, is – for all intents and purposes – a character in its own right.

Tarantino is no stranger to taking moments of history and repurposing them for cinema. Take, for instance, Inglourious Basterds (which won Christoph Waltz an Oscar), which was set during World War II and ended in Hitler’s death by machine gun. Tarantino is known to play with the outcome of historical events.

The director penned a note, imploring members of the Cannes press to keep the film details under wraps and not spoil any surprises, writing:

“I love Cinema. You love Cinema. It’s the journey of discovering a story for the first time. I’m thrilled to be here in Cannes to share “Once Upon a Time… In Hollywood” with the festival audience. The cast and crew have worked so hard to create something original, and I only ask that everyone avoids revealing anything that would prevent later audiences from experiencing the film in the same way. Thank you.”

At the press conference, Tarantino was asked why he thinks we’re all still so fascinated in the Manson murders. Tarantino said:

“I’ve done a lot of research on it over the last few years….how he was able to get these girls, and even these young boys….and the more information you get about it, it doesn’t make it any clearer. It makes it even more obscure the more you know. The unknowingness of it, I think, causes this fascination.” 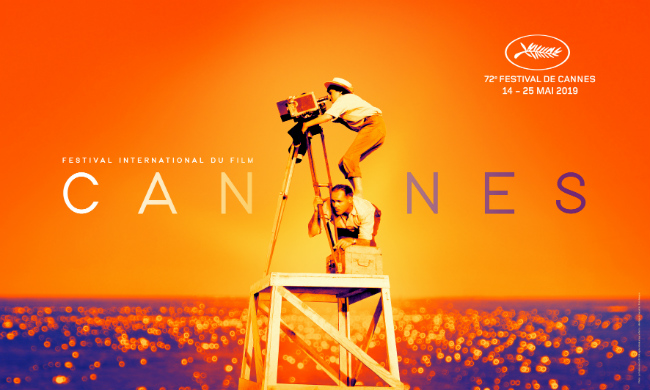 Chaz Ebert (late film critic Roger Ebert’s widow) for the Chicago Sun-Times asked the director and actors how the film has led them to take stock of their own lives. DiCaprio said in response: “…[I have] an immense appreciation for the position I’m in…the character is struggling with his own pathos; I immediately connected with him. I have a lot of friends in the industry. I feel immense gratitude to have this opportunity.”

Of becoming Sharon Tate, Margot Robbie said she went about it by “doing a lot of research. I watched and read everything I could. As an actor, you try to understand what purpose the character plays in the story. I saw her as a ray of light, and I wanted her to be light. In doing so, I felt I could honor the memory of Sharon Tate, who many said was such a light in this world.”

“What’s it like for you to work together for the first time?” an Aussie journalist asked of Pitt and DiCaprio working together.

“To be honest,” DiCaprio said, “Quentin gave us this incredible backstory of our characters…and all of that fed into this immediate comfort and ease that [Pitt] and I had with each other. Brad is not only a terrific actor, but he’s also a professional…it was incredibly easy working with Brad.”

“It’s that thing of knowing you’ve got the best of the best on the opposite side of the table holding up the scene with you,” said Pitt. “As Leo said, we have similar experiences to laugh about, it was great fun.”

DiCaprio added about Tarantino’s vision for the film: “…I think this movie is his love story to his industry. Two characters who are outsiders…I think all of us at this table, at one time, felt like outsiders in this industry. For me, it’s a story about coming home. It’s truly a love letter to this industry that we’re so fortunate to work in.”

A love letter, a homecoming – both bundled up in a packaging of gratitude. If nothing else, the presentation of the film by its talent and director has been (mostly) a class act.