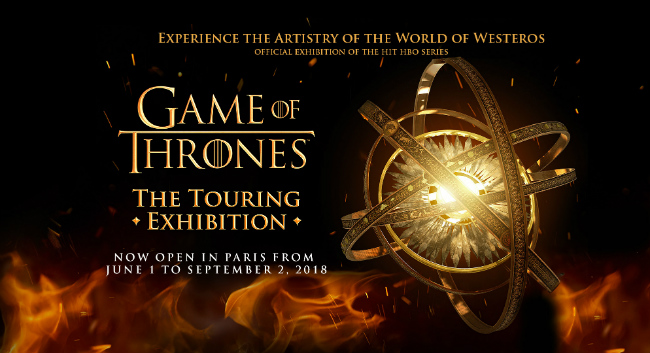 As someone who knows very little about Game of Thrones beyond the fact that it is on HBO, there are some dragons in it (I think?), the phrase “winter is coming” seems to be pivotal, and almost everyone I know seems to be obsessed by the show (to their constant dismay, I am not), even I was intrigued when I heard that a Game of Thrones exhibition was coming to Paris.

Although I’ve never seen a full episode of the hugely popular series (which was recently nominated for a staggering 22 Emmy nominations, I’ve seen images of it. And if there’s one thing that will ultimately draw me into watching the show, it will be my desire to see more of the fantastical world and its visuals. The lavish costumes look resplendent, the breathtaking views of worldwide locales where the show has shot – Northern Ireland, Iceland, Spain, and Croatia – are stunning, and, did I already mention the costumes?

Game of Thrones’ costume designer, Michele Clapton, even went to Paris to supervise aspects of the exhibit. Clapton, who has won multiple Emmy’s for her Game of Thrones costume designs, also designs for British hit show The Crown. “The most difficult thing about a fantastic world,” Clapton told Le Figaro, “is that you have to imagine everything in a realistic way, because these costumes have to make sense.”

At the Game of Thrones exhibit, which will be touring around the world (it came to Paris from Barcelona), many luxurious and awe-inspiring costumes designed by Clapton are on display. That alone might make me pay the €19.90 entry fee. Also featured are prop pieces, statues, swords, media materials, sound clips, a dragon head, and apparently even smells from the show (Leather boots? Furs from cloaks? Dragon dung?). The layout is, as reported by Forbes, “intended to recreate the atmosphere of the seven kingdoms, starting with a snowy forest surrounded by a cloud of mist and stages the big families of Westeros and key moments of the series.” Interactive parts of the exhibit include a North Wall of ice that can be climbed, and an iron throne upon which to sit.

The exhibit is a collaboration between HBO and GES Events. In Paris, it can be found at PARIS EXPO/ Porte de Versailles (open every day of the week), and it runs through September 2nd. Further information about the touring exhibition can be found on its website.

“Shall we begin?” Dive deeper into the #GameofThrones Season 7 premiere. (Link in bio) #GoTS7