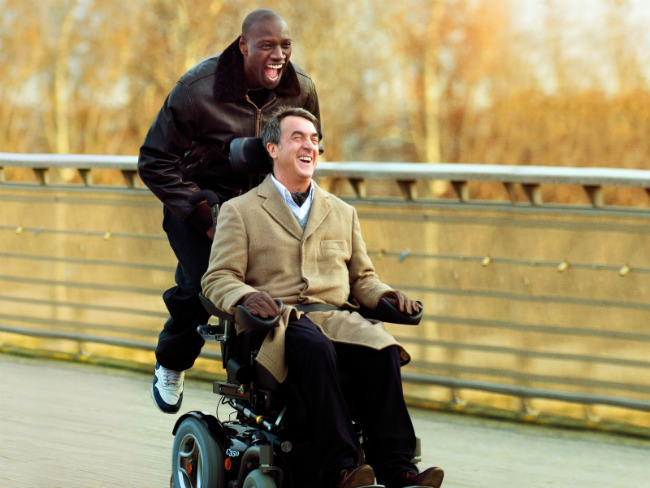 Still of François Cluzet and Omar Sy in The Intouchables (2011). Copyright Gaumont.

The glory that is the French cinema matches the diversity of France in general. Gone are the pre-Nouvelle Vague days (and for that matter post-Nouvelle Vague days) when French movies might entertain or provoke with a special élan, yet still represent a narrow demographic. The most interesting movies made today feature talent, behind and before the camera, reflecting a wide range of backgrounds—racial, ethnic, religious, gender, and sexual orientation. The mix might collide, mash and sizzle, but in the end we get the rich stew that is devoured greedily by film buffs the world over. At a time when pundits are wringing their hands over whether French openness can still work, or even survive, these filmmakers and their films show not only that it does work, but that the result isn’t just the sum of its varied parts. Here is a sampling of a number of key figures in French cinema today.

Tahar Rahim, Actor: One of the most powerful actors today, the French Brando. He comes from the provincial town of Belfort, child of parents from Oran, Algeria. After uninspired studies his talents were awakened in a film program at university in Montpelier. After several minor efforts, he appeared in Jacques Audiard’s The Prophet, a worldwide smash. He won César awards in the best actor and best new actor categories (the rules were changed to prevent one person from “accumulating” prizes for the same role). He has gone on to international as well as French roles, and starred recently in The Anarchists.

Maïwenn, Director/Actress: Maïwenn, who goes by one name, is the daughter of an aspiring actress of Algerian descent and a Franco-Vietnamese father. She began as an actress, but soon began directing her own films. Her first feature was autobiographical, deriving its power from her own tumultuous family life. Since then she’s made films (Poliss, Mon Roi) that explore the violent links between private emotions and contemporary urban society. Having won top César awards for Poliss, she has become established as one of France’s premier filmmakers.

Jacques Audiard, Director: Audiard comes from French film royalty, son of the great screenwriter Michel Audiard. But his films are anything but traditional. He specializes in troubled characters on the margins of French society. His most recent movies include The Prophet, about a young delinquent’s unholy progress in prison; Rust and Bone, about the romance of a woman (who lost her legs to an Orca) and a mixed martial artist; and Dheepan, about a Sri Lankan migrant in France.

Abdellatif Kechiche, Director/Actor: The Tunisian-born Kechiche first made his mark with local color works like Thé à la Menthe, and his first directorial efforts, La Faute de Voltaire, about an undocumented immigrant, and L’Esquive, about school kids in the banlieues putting on a play by Marivaux. His breakout film was La Vie d’Adèle, a controversial, very explicit film about a gay woman’s coming of age.

Adèle Exarchopoulos, Actress: The eponymous star of La Vie d’Adèle is Adèle Exarchopoulos, born of a Greek father and French mother. Although she lives with the actor Jérémie Laheurte in real life, she brought stunning verisimilitude to the role of a young woman who discovers and explores her gay nature. She won prizes at both Cannes and the César Awards. She currently stars with Tahar Rahim in The Anarchists, and has also recently shot a film with Sean Penn.

Guillaume Gallienne, Actor, Member of the Comédie Française: Guillaume Gallienne came to public prominence playing Pierre Bergé in the biopic Yves Saint-Laurent, but he’s distinguished himself on the stage, TV, and even radio. He grew up identifying as a female, but instead of going the trans route he considers himself to be bisexual, and is married (to a woman). His personal background helped with the role as YSL’s lifelong partner, but he immersed himself even more deeply in autobiography in Les Garçons et Guillaume, à Table! The film won five César awards, including Best Film.

Omar Sy, Actor: Sy was born in the French provinces, but his father was from Senegal and his mother from Mauritania. He emerged from hard-scrabble working-class origins through comedy, teaming up with Fred Testut, especially on television. His breakout was Intouchables, a comedy hit about a paraplegic and his caretaker. Sy has become a sort of French Eddy Murphy, winning a “best actor” César. Since then he’s gone on to playing in serious films, directed by the likes of Michel Ondry, and international blockbusters in the X-Men and Jurassic Park franchises.

Dany Boon, Actor/Director: If Sy is France’s Eddie Murphy, Dany Boon, born Daniel Hamidou, is its Jerry Lewis. He’d been a premier stand-up comic for years, then moved to television and movie roles. His Bienvenue Chez Les Ch’tis, which took the micky out of his native Nord (ch’tis refers to people from the region) as well as the short-sighted attitudes of the rest of the country, became France’s biggest-ever box-office success. While Boon hails from the North, as does his mother, his father was a Kabylie (Berber) from Algeria. Making the mix complete, he converted to Judaism on the occasion of his second marriage.

The film poster for “Fatima,” directed by Philippe Faucon

Philippe Faucon, Director: Philippe Faucon is a French director born of French parents in Morocco (his father was serving in the army at the time). He and his family later lived in Algeria. The impact of this experience is telling. Nearly all of his work consists of films about persons of immigrant background. His first significant film, Les Étrangers, was about a gay soldier of North African descent sent to Bosnia. Samia, La Disentegration, and Fatima were about immigrants, while Dans La Vie is about the encounter of elderly Jewish woman and a Muslim caregiver. With La Trahison he portrayed the Algerian War that continues to mark France.

Michel Hazanavicius, Director: Michel Hazanavicius’ parents, Lithuanian Jews, immigrated to France in 1920, a time when the French welcomed many refugees from the revolution and civil war-torn East. He began his film career with twin obsessions: American movies and comic escapism. His breakout was a parody of James Bond called OSS 117 (a sequel was also a box-office smash). He followed that with an international hit, The Artist, a parody and homage of the American silent film that won several Oscars. More recently, with The Search, he’s turned to a serious look at Chechnya during WWII.

The film poster for Julie Delpy’s “Before Sunset”

Julie Delpy, Actress/ Writer/Director: Julie Delpy’s parents were French theater actors, and undoubtedly inspired her choice of vocation. But she also found her own way, in the United States, where she attended the Tisch School of the Arts as well as the Actor’s Studio. Since then she’s lived between France and the US. As an actress she’s made films for French directors like Jean-Luc Godard, and also for noted Americans: Alan Rudolph, Richard Linklater, Jim Jarmush, and Todd Solandz. Not content to cross national boundaries but also professional ones, Delpy has carved out an interesting career as screenwriter and director. Unsurprisingly two of her better known works are titled Two Days in Paris and Two Days in New York.