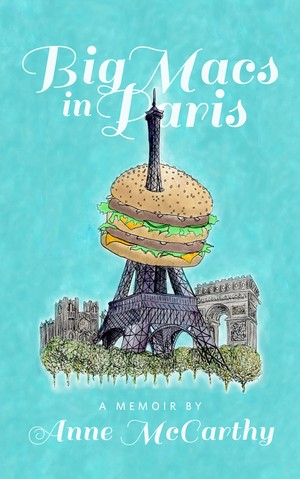 [1]Anne McCarthy’s Big Macs in Paris [1] is about the experience of an outsider in Paris. It fits the classic coming of age memoir, but does so in an of-this-century way, where the knots don’t always come untangled.

The memoir is set in a community of young adults, mostly American, who live in modern day Paris. The group falls in love with the city, but never truly becomes a part of it, relying on each other to fill the void that the city cannot. The odd dynamic of young hopefuls in the most romantic of cities creates a page turning read where the world starts to feel like one that the reader is just as much a part of.

Everyone in McCarthy’s Paris is putting off something and using other means to distract themselves from the “real world” that awaits them back home. Time is a constant struggle for everyone she deals with and it becomes an ever-present force making all relationships and situations temporary and, more importantly, volatile.

McCarthy seamlessly navigates through her personal experiences of her time in Paris with painful truths about relationships and expressed in a humorous, chuckle-to-yourself-while-reading way. McCarthy’s raw honesty is crafted so well that it would be hard to find someone that her words don’t strike a chord with. McCarthy will make you laugh, think and reevaluate, all while feeling like it’s just a friend telling you a really good story.

Samantha Kelly is from New York City, and now lives and works in London. She graduated from Indiana University’s Ernie Pyle School of Journalism is 2012 and is pursing a Masters in Creative Writing at the University of Westminster.<

Know how I know I’m poor?

I visit cemeteries for fun. Well, a cemetery. Specifically, the Père Lachaise cemetery.

Today was a beautiful spring day in Paris. I preferred to enjoy the day’s beauty from the comfort of my apartment, occasionally glancing out the Compound windows, while lounging in my pink Victoria’s Secret sweatpants and watching old Charlie Rose interviews.

Miri was having none of that. She is far more adventurous than I.

Miri recently finished her teaching position in a French school, and moved out of the guest house in Montmartre. She was staying at the Compound for an indeterminate amount of time, and was our best temporary roommate to date: she did the dishes, bought toilet paper and most importantly, she cooked for me.

Miri piled a scoop of ratatouille into a bowl and handed it to me as I sat at my computer, looking up flights to Madrid.

“It’s gorgeous outside!” said Miri. “Let’s do something. Have you been to Père Lachaise cemetery?”

“Um, no. I’ve heard of it though,” I said, shoving a forkful of pasta into my face.

“It’s the biggest cemetery in Paris. It’s crazy. We should go!” said Miri.

Père Lachaise is the largest cemetery in Paris, and rumored to be the most-visited cemetery in the world. It’s notable for the people buried within the gates. The roster reads like a who’s-who of notable artists: Edith Piaf, Molière, Oscar Wilde, Jim Morrison and Tupac Shakur. Well, not Tupac. Everyone knows he’s alive and well.

Miri and I arrived at the cemetery by way of the Gambetta Metro stop, and descended through the gates.

“Oh, there it is!” I said, seeing a crowd around a lipstick-covered tomb.

Wilde, an Irish poet and writer (though the English like to claim ownership of him and his work), reached the height of his fame and success while living in London. During his heyday, he had an affair with Lord Alfred Douglas, a student at Oxford, whom he met in 1891. Lord Alfred’s father, the Marquess of Queensberry, got wind of the affair and labeled Wilde a “posing sodomite.”

A libel suit ensued, leaving Wilde bankrupt from legal fees. He was charged with sodomy and sentenced to two years of prison – first in London, then later moved to Reading. Wilde emerged from his sentence in poor health and penniless. He moved to Paris, where he roamed the streets alone and drank away what little money he had.

Wilde died at age forty-six of cerebral meningitis in Paris at L‘Hotel, formerly Hotel d’Alsace. On his deathbed, he said of the dingy hotel, “My wallpaper and I are fighting a duel to the death. One of us has got to go.”

I guess the wallpaper won that duel.

Wilde’s story exemplifies the crazy nonsense people used to believe (i.e. being gay is not only wrong, but illegal); and what happens when people buy into cattywampus ideas: slavery, illegality of gay marriage and Sarah Palin as a viable option for leadership.

Wilde’s tomb was covered in red lipstick kisses and quotes from his books were scrawled in marker on the stone. At the base of the tombstone were shoes, pencils, cards and pieces of candy. I restrained, and held back from eating a piece of the dead man’s candy.

I applied pink lipgloss and laid a sheer, glossy kiss on the tombstone. Now I will have to boil my lips off to kill the germs. Beneath the stain I wrote:

“Oscar, Baby! Thanks for the memories, thanks for the laughs. You rock my flying pig socks!” xoxo Anne McC, St. Louis, MO, USA 2011

Miri and I left and walked towards other graves, and I vowed to read more Oscar Wilde literature.

(Author’s Note: I have yet to read any Oscar Wilde literature.)

We wound down the path, clinging to our Rick Steves guidebook. Though, we managed to get lost. Luckily, we found someone who could help. Rather, he found us.

I dubbed him Cemetery Steve. Not for the alliteration, but because he genuinely looked like a Steve.

Cemetery Steve was a sweet old Frenchman who approached Miri and I when it became clear that we were lost. He said something in French, which Miri responded to, because she is far more proficient in French than I. She explained to Cemetery Steve that we were looking for Jim Morrison’s grave (how original and un-American of us).

“So, how do you know this cemetery so well?” Miri said in French.

“Well,” Cemetery Steve said in English, “My best friend, he have die here last year. I come and be here every day often.”

Something tells me this was not so much a “friend,” but a Wilde-style “friend” that Cemetery Steve lost last year, judging by the heartbroken sadness in his voice and his dandy style of dress.

He led us to Jim Morrison’s grave, and waved au revoir to Miri and me. Cemetery Steve trotted back up the hill, and a black crow flew off a nearby grave as he walked past. T’was erie.

Morrison’s grave is the most popular one in the cemetery and is staffed with a security guard twenty-four hours a day. Morrison’s bust statue was stolen in 1988 and other vandalizations have occurred.

We stood admiring the grave and the flowers around it. A leather-clad Irishman to our left cracked open a Guinness beer, raised it in “cheers” to Jim and took a mighty big gulp. But the security guard was on it in a jiffy. This French guard was unlike most French authority figures; he was bulky, brutish and attentive. He grabbed the Irishman by the cuff of his leather jacket and dragged him aside

Soooo, I guess I shouldn’t shoot up the heroine I brought in honor of Jimbo?