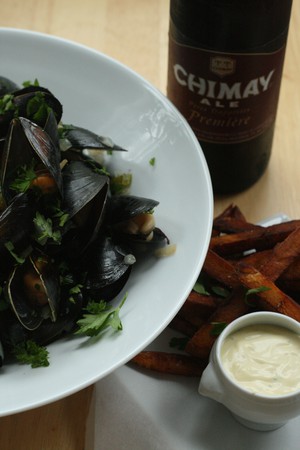 The 2010 Tour de France has been anything but boring.  The second stage, Brussels to Spa, was marred with crashes. Most of the riders were subjected to cuts and bruises. And that was before they headed into the pavés of northern France.  Let’s enjoy the fact the Tour would spend two stages in the lovely region of Champagne. A little glass of bubbly makes everything better, don’t you think? And they will need it before they start to climb this weekend into the high Alps that separate the men from the boys.

Since we’re one week into the Tour de France, it’s also the first week of the 2010 Tour de French Cuisine. My culinary dedication is to France – stage by stage.  There are a few days before it can really be called French, but because of Rotterdam’s & Belgium’s locations and the influence of French gastronomy, I’m combining it.

The Prologue started in Rotterdam, which is located near the River Maas and the North Sea. Fish and fresh local produce are big parts of the local cuisine. Asparagus, especially white ones, are a favorite in the Netherlands even though they taste the same as green asparagus. White asparagus are covered with dirt and a container to keep the sun and light off of them. A classic Dutch recipe is Hollandaise sauce. Even though it’s considered a French sauce, some argue it was invented in Holland, since it was mentioned in a cookbook dated 1593. Top the sauce with chopped hardboiled eggs and thin sliced ham and it’s the perfect side dish or may even be a light lunch.

Stage #1 left Rotterdam and the Netherlands behind and headed straight to the capital of Belgium and the European Union, Brussels. Belgian gastronomy is very heavily influenced by the French and one of its most famous exports isn’t even named after them. French Fries, or Pommes Frites, are served with many meals in Belgium and are always made with Moules Frites. Moules Marinière et Pommes Frites. They’re easy and fast meals to make and if you drink Belgian beer, it’s the real McCoy. Don’t forget the homemade mayonnaise loaded with lots of Dijon mustard and serve it with the frites.

Stage #2 was all Belgium. The bikers left Brussels and headed east to the town of Spa. Belgium is bordered by the Netherlands, Germany, France and Luxembourg and its cuisine is influenced by those countries. Many dishes are similar to those you may find in Northern France. Waterzooi is a traditional Flemish soup that can be made with fish but can also be found using chicken. It is a rich and delicious chicken soup finished with a little cream, topped with homemade croutons.

Stage #3 has the Tour heading into France where it will stay until it reaches the Champs Elysees on July 25th. Riding over the famed cobbles that are used in the Spring Classic race, Paris-Roubaix it is the stage that everybody was looking forward to during week #1. Once the riders cross onto the French soil, they arrive in the Nord-Pas-de-Calais, the region that covers the tip top portion of France and stretches to the edge of the Champagne region. Heavily influenced by Flemish cuisine, Carbonnade de Boeuf à la Flamande, or Beef Stew with beer slow cooked with croûtes slathered in spicy mustard and paired with some French beer. Très bien!

We end the first five days with a stop in the Champagne region and a visit to the historic “Coronation City” of Reims. Cookies aren’t the first thing that comes to mind when you think of what to pair with Champagne. But in Reims, there’s a lovely crisp cookie that complements this special drink. Le Biscuit Rose de Reims is a light ladyfinger, similar to cookies but with a crisp sugar-dusted shell. The meringue-based cookie, which has a pink tint, has a hint of strawberry taste. The texture is similiar to a French Macaron and it’s hard to eat just one. Any excuse to drink more champagne can’t be bad.

The second week of the Tour de France and the Tour de French Cuisine will have a visit to one of the best gastronomic regions, Burgundy, before heading into the Alps and then by the end of the week making its way down to the Southwest corner and the Pyrenees.

For full recipes and historical information on every stage please access my blog [1].

Fat Tire Bike Tours [2] are great for seeing Paris in a different light. You’ll see more, have more fun, and not feel tired at the end of it. These are highly recommended and truly a great thing to do during your stay.  Take a City Segway Tour [3], the world’s first guided tour using Segways. Be sure you glide with the original!